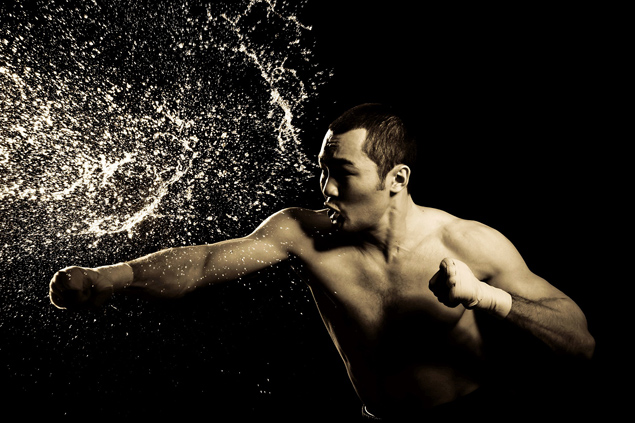 A 30-year-old Kazakhstan native living in Las Vegas, Shumenov wants a shot at either RING and WBC champion Adonis Stevenson or WBO beltholder Sergey Kovalev should he get beyond Hopkins.

"Bernard Hopkins is a legendary fighter and it would be an honor to fight him. He said he wants to fight me, I want to fight him. If I had my choice of unifying against any of the other world champions in the 175-pound division, I would pick Bernard Hopkins," said Shumenov.

"He is a six-time world champion who is headed to the Hall of Fame. Hopkins already proved that age isn't an issue and maybe he isn't human. The other two world champions, Stevenson and Kovalev, only became world champions this year and they haven't beaten opponents at their peaks like Hopkins has so many times."

"From watching some of his past fights, I expected him to come forward and fight inside," said Shumenov, who had last been in the ring for a unanimous decision over Enrique Ornelas in June of 2012.

"I was prepared to counter him. But he fought defensively and I had to set him up. I feinted a lot more than in my past fights, moved better, and I eventually got him."

Hopkins was ringside at the Alamodome in San Antonio for Shumenov- Kovacs, and agreed with Golden Boy CEO Richard Schaefer that a bout between the two should happen in March or April.

A 48-year-old future hall of famer, Hopkins unanimously decisioned Karo Murat in October in defense of the IBF belt he won by unanimous decision over previously unbeaten Tavoris Cloud in March to extend his own record as the oldest man to win a significant crown.

Hopkins first set the record at the age of 46 by outpointing Jean Pascal for the WBC's title in May of 2011 before being dethroned following a majority decision loss to Chad Dawson in May of 2012.

Stevenson is coming off last month's second-round knockout of Tony Bellew, representing his 10th straight stoppage victory, and his fourth of the year, and one that he accurately predicted would come within six rounds during an interview with RingTV.com.

A 36-year-old southpaw who fought at 175-pounds for only the third straight time, Stevenson has scored knockouts in his past 13 victories.

In March, Stevenson scored a sixth-round stoppage against journeyman Darnell Boone in a super middleweight bout, avenging the Canadian's second-round knockout loss from April of 2010.

In June, Stevenson rose into the light heavyweight division for a clash of southpaws with Dawson, whom he stopped in 76 seconds with what he called his "Superman punch" to become the RING and WBC 175-pound champion. Dawson was coming off a 10th-round stoppage loss to Andre Ward in September of 2012.

In August — six days after his 36th birthday — Stevenson registered his 10th straight knockout in as many consecutive victories when he out-boxed and out-slugged Cloud for a seventh-round knockout in defense of his belts.

Kovlev made the first defense of the belt he won from previously unbeaten Nathan Cleverly with a fourth-round stoppage in August, and is 11-0-1 with 11 knockout wins in his past 12 bouts.

"Stevenson beat Dawson after [Andre] Ward destroyed him and Cloud wasn't the same after Hopkins fought him," said Shumenov. "Kovalev won his title from Cleverly, who I had been trying to fight for a few years because he had been built up and had never fought a top guy."

A 2004 Kazakhstan Olympian, Shumenov dethroned Gabriel Campillo by split decision in January of 2010, avenging a loss by majority decision in their previous fight in August of 2009.

Shumenov established a record for the light heavyweight division by defeating Campillo in just his 10th professional bout.


Since then, Shumenov said coveted bouts with Dawson, Cleverly and former WBO titleholder Juergen Braehmer never came to fruition.
"My goal has always been to unify and Golden Boy and Showtime are going to give me that opportunity. We tried to make a couple of unifications and different fights that for one reason or another fell through," said Shumenov.

"We tried to made unification fights with Cleverly and Dawson when they held belts, but they weren't interested in fighting me. I tried to unify with a scheduled fight against Braehmer, but he ran out of town three days before our fight."

Shumenov should have no problem making a bout with Hopkins, who sees Shumenov as the first step toward unifying the 175-pound division before January of 2015 when he turns 50.

"I want to prove that I am the best 175-pound champion in the world, and the way to do that is to beat the other champions," who, like Hopkins, fights under the Showtime network while Stevenson and Kovalev are aligned with rival HBO, which has severed ties with Golden Boy.

"I think if fans really support having one world champion in our division, maybe all sides can get together to do a tournament with the winner of a fight between me and Hopkins going against the Stevenson-Kovalev winner. It's been done before."