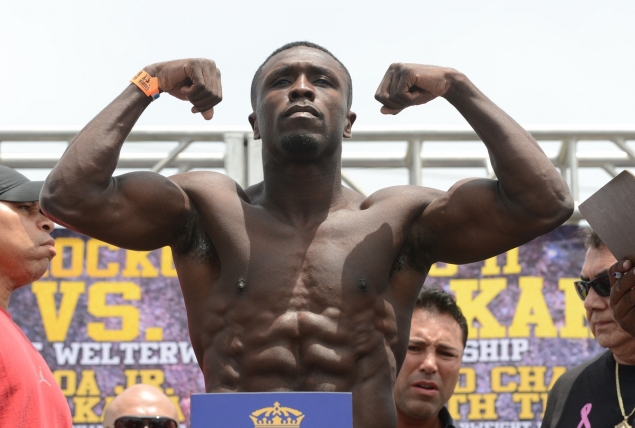 Former two-time welterweight beltholder Andre Berto, a Winter Haven, Fla., resident who is of Hatian descent, is continuing relief efforts in his family's native country in relation to the earthquake which devastated that island nation in January of 2010.

Having joined his partners at Project Medishare to raise funds for their Hospital Bernard Mevs in Port Au Prince, Berto spent this past Friday with many of the facility's youngest patients, handing out Christmas presents and visiting the children as they undergo treatment at the venue.

"Spending time with these kids and giving them something to smile about was the perfect way to start my holiday," said Berto, in a prepared statement. "Making the people around me happy is better than any Christmas present I could get."

Although Berto (28-3, 22 knockouts) has lost three of his past four bouts, the last by 12th-round stoppage loss to Jesus Soto Karass, whom he dropped in the 11th round in July, the 30-year-old has remained a part of the healing in Haiti with projects such as the charitable organization, Generosity Water, that enabled water wells to be built providing drinking water for thousands of Haitians.

In association with Project Medishare, Berto and his older brother, Cleveland, traveled to Haiti with organization co-founder Dr. Barth Green days after the 2010 earthquake.

Berto had the opportunity to meet Haitian President Michael Martelly following his arrival on Thursday and to discuss their mutual future goals and charitable plans for the country.

On Friday night, Berto and members of the Project Medishare team took part in a philanthropic fashion show on in Port Au Prince to assist the event organizers in raising funds for the hospital.

In addition, The International Amateur Boxing Association (AIBA) announced recently that it would be working with the IOC on their Haiti Sport for Hope project, which will include the creation of an Olympic Youth Development Centre (OYDC) in order to foster community development, promote elite sport in the and spread the Olympic values.

Responsible for providing lifesaving care to Haiti's sickest adults, children and premature infants, Bernard Mevs Project Medishare is the only trauma, critical care and rehabilitation facility in Haiti, treats 300-350 patients daily, and still faces overwhelming demand to provide more medical help, which is given regardless of a patient's ability to pay.

Berto hopes to work closely with the two major sport organizations on their initiative, his Berto Dynasty Foundation having maintained its status over the years as a work in Haiti over the past few years with Generosity Water.

A member of the Hatian Olympic team in 2004, Berto and his family are working with the Haitian Boxing Federation to facilitate the ability of young Haitian boxer to follow in Berto's footsteps at the Olympic Games.

In the meantime, Berto has undergone rehabilitation following a three-and-a-half-hour surgery in August to repair a ruptured subscapularis (under the shoulder blade) tendon in his right arm suffered during his loss to Soto Karas. The operation was performed by Dr. Neal ElAttrache, who was involved with the surgery that repaired Berto's  ruptured left biceps in February of 2012.

Berto, who believes that he suffered the injury in the second round, was found to have completely torn the tendon from top to bottom, but anticipates returning to the boxing gym in early 2014.

Although Berto's fifth-round stoppage of Jan Zaveck earned the IBF's belt in September of 2011, his stoppage loss to Soto Karass was the first knockout in the career of a man whose other losses were by unanimous decision to Victor Ortiz and Robert Guerrero in April of 2011 and November of 2012, respectively.