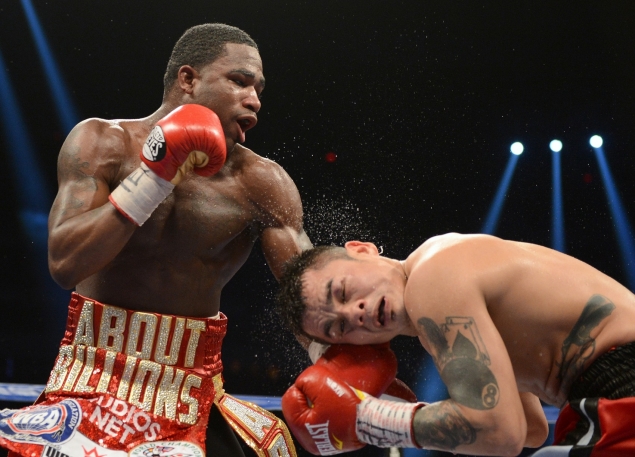 Previously unbeaten Adrien “The Problem” Broner has apologized to his fans through his Twitter account for his hasty exit from the ring without being interviewed following last Saturday’s unanimous decision loss to Marcos “Chino” Maidana that dethroned him as WBA welterweight beltholder on Showtime at The Alamodome in San Antonio, Texas.

Later, however, Broner (27-1, 22 knockouts), who was floored once each in the second and eighth rounds, did sit down with Showtime’s Barry Tompkins for a late interview in the locker room to address the loss to Maidana (35-3, 31 KOs).

“This is the face of a 3x world champion in 3 different weight divisions,” wrote Broner, 24, whose comments ended with “#RematchTIME #TrueFIGHTER” and accompanied a large instagram photo.

“I am a man and first of all I want to say I’m sorry for running out on all the fans after my fight. That was wrong of me as a fighter. I want to congratulate team CHINO, and I want to thank everybody that supported the fight. But I am not done. This is just a minor set back for a major come back.”

Broner has earned title belts over three weight classes, taking the WBO’s junior lightweight belt by third-round knockout over Vicente Martin Rodriguez in November of 2011, and the WBC’s lightweight title following an eighth-round stoppage of Antonio DeMarco in November of last year.

In his last bout in June, Broner jumped two weight divisions for his 147-pound debut with a split-decision victory that dethroned Paulie “The Magic Man” Malignaggi for the division’s WBA’s belt.

But Broner ran into a Maidana who was in pursuit of his fourth straight stoppage victory, a run includes knockouts of Jesus Soto Karass and Josesito Lopez.

“I’m okay. Things happen. Like I said, he fought a helluva a fight, and he was the better man tonight. But guess what? We can rematch at any time. I will fight him my next fight,” said Broner, in part, during his interview with Tompkins.

“I don’t need a warm up fight. I will fight him in my next fight…I’m still a champion in three different weight classes. Tonight, Maidana was just the better man. But we fought a helluva fight, and I hope that the fans got what they deserved. We’re still going to live like we won the fight.”