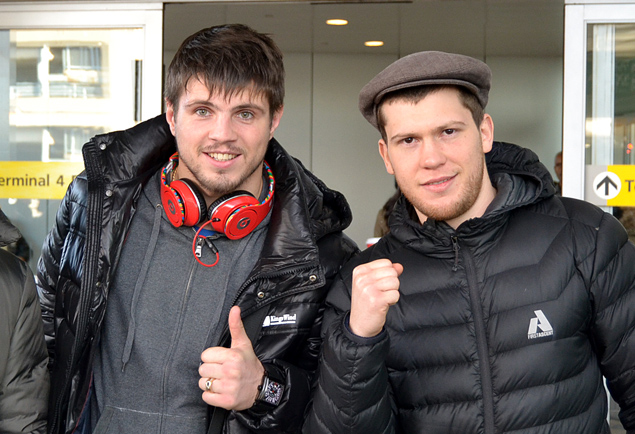 World amateur middleweight champ Ievgen Khytrov (left) poses with his promoter, former 140-pound title challenger Dmitry Salita, upon his arrival from their native Ukraine to New York City, where he will turn pro on Wednesday.

The story is a familiar one.

A father takes his son to a gym so he can learn how to defend himself.

But in the case of world amateur middleweight champion Ievgen Khytrov, who makes his professional debut on Wednesday at Webster Hall in New York City, NY, this tale has a unique twist.

Khytrov’s dad took him to the gym alright, but his intention was to teach his son, who was something of a bully, a lesson. 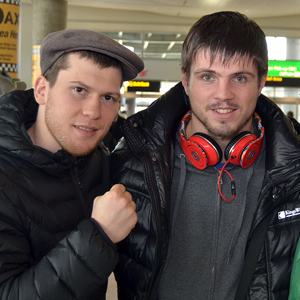 “The story is 100 percent true,” Khytrov told RingTV.com through his interpreter and promoter, Dmitry Salita. “My father was not a boxing fan. He took me to the gym to show me I was not the toughest kid on the block. He wanted me to learn about discipline.

“I did fine and didn’t get beat-up. Going there really helped me,” he said. “I loved to fight when I was kid. Going to the gym gave me a place to let my aggression go. I enjoyed sparing and fighting in competitions. I became a better kid.”

Khytrov, 25, who was born in Kryvyi Rih, Ukraine, has long been a devotee ofthe ring.

“I’ve always been a boxing fan,” Khytrov said. “I’d watch all the big fights on TV. I’d then take what I say on the streets and use it.”

Were there any particular fighters he admired?

“I really liked Roy Jones,” Khytrov said. “He has so much talent. I liked (Felix) Trindad, (Fernando) Vargas, (Marco Antonio) Barrera, and (Eric) Morales. I love exciting fights. I like to see fighters bash each other.

“I like it when the fight brings excitement to the fans. I like it when a boxer comes and gets it. That’s what I’m looking forward to doing. I want to be like those fighters that I watched when I was younger.”

“I started to fight when I was seven years old,” Khytrov said. “But I really didn’t take it seriously until around 2003. A year later, I won the bronze at the European Championship and the Nationals. I was going to these tournaments and fighting every day. The tournaments would come one after another.”

His amateur career reached its pinnacle when he defeated future Olympic champion Ryoto Murata in 2011 to capture the gold at the World Amateur Boxing Championships in Baku, Azerbaijan. 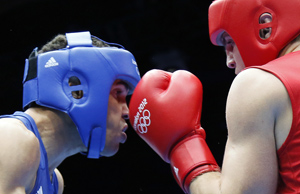 At the 2012 Olympic Games in London, Khytrov was heavily favored to add more gold to his growing collection. His opponent in round one was Anthony Agogo of the United Kingdom. Khytrov scored two knockdowns during the three-round contest, and appeared to be the easy winner.

But this was the Olympics, where scoring a fight can be as baffling as the English tradition of snorkeling in a bog. The judges’ scores resulted in a tie, so something called the “countdownsystem”was used, resulting in scores of 52 for each fighter.

To break the deadlock, the judges voted for the winner. Incredibly, Agogo was awarded the majority decision.

Kytrov shook off his disappointment and moved on. Earlier this year he knocked out 2013 World Amateur Champion Zhanibek Alimkhanuly in less than 30 seconds. With Agogo turning professional eight months ago, it’s possible that the former rivals could meet again in the ring.

“My qualification and the kind of fighter I am, I’m going to show in the ring,” said Khytrov. “Nothing would make me happier than if that fight with him happens down the road.”

There are several others Kyytrov would like to fight someday.

“When I win a world title,” said Khytrov. “I’d like to fight the best fighters in the division. At 160 (pounds), I’d love to fight Golovkin. ThenI’d like to move to 168 and fight [RING super middleweight champ] Andre Ward. I have tons of respect for Golovkin and Ward as fighters as well as human beings.

“They’ve accomplished so much, but as an athlete,as soon as I get to that level, those are the kind of guys I want to fight.”

Khytrov is an aggressive fighter. Eighty percent of his amateur victories were by knockout.

“When I was a young boy some of my losses were by very close decisions. The prime example is the Agogo fight and another a few years ago. I felt I won those fights,” he said. “The best decisions are by knockout. I’ve trained to always go for the knockout. I like to go to the body.”

Khytrov faces Scott Oliphant in his pro debut. Oliphant has come out victorious in four of his seven fights, scoring three knockouts. Khytrov is anxious to begin his career.

“I’m very happy to be fighting in New York City,” Khytrov said. “This is a great opportunity. I’ve wanted to turn pro for a while. I feel like everything is coming completely together now. I’ve been fighting my whole life. I’m very anxious and excited to get in the ring and show the professional world and boxing fans that I’m the real deal. I want to be impressive.”

Salida, who also boxes professionally, stated that Khytrov will eventually make New York his home base.

“Most of the fights are going to be in the United States,” Salida said. “We will take him back to the Ukraine, but most of his fights will be here in New York City. New York has a tremendous Russian speaking population. He’s already pretty popular here. Tickets have been selling really well.”

Khytrov is blessed with good looks and an easy charm. Many people are referring to the heavy-handed slugger as the second coming of Golvkin. Round one of his journey is less than a week away.