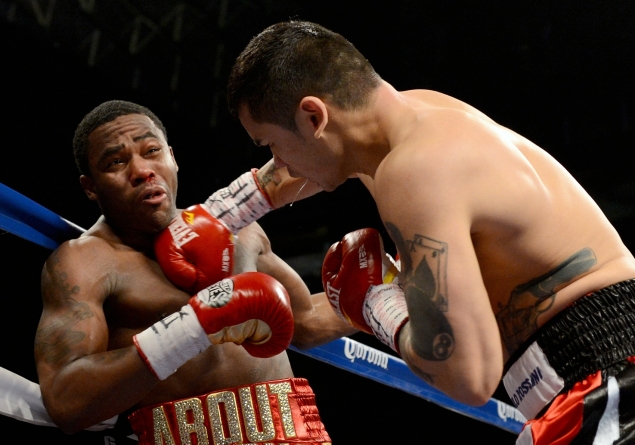 SAN ANTONIO — Over the course of Saturday night’s unanimous decision that dethroned Adrien “The Problem”Broner as WBA welterweight titleholder, Marcos Maidana used left-right-left hook combinations to score knockdowns in the second and eighth round.

But what may have contributed as much to Maidana’s domination was his punishing work downstairs, where the 30-year-old Argentine connected on 101 body blows, according to statistics provided by Showtime statisticians.

RICHARD SCHAEFER: ‘THERE IS NO REMATCH CLAUSE’

Although there was no rematch clause in the event that Broner lost, Golden Boy CEO Richard Schaefer sees that as being among one of the options for the 24-year-old.

“I have to tell you, I would like to see a rematch,” said Schaefer. “I would like a rematch at the Alamodome. There is no rematch clause.”

“I’ll tell you one thing, make the rematch,” said Broner. “I don’t need a warm-up fight. I want a rematch.”

“I have no problem with a rematch,” said Maidana. “Any champion would take another fight.”

SHAWN PORTER WANTS A PIECE OF THE ACTION

Alexander had represented the last defeat for Maidana, who had scored three consecutive knockouts prior to facing Broner, and had fallen to Alexander by unanimous decision in his 147-pound debut in February of 2012.

“I will tell you what, I just had the new 147-pound IBF champion here,” said Schaefer, referring to Porter. “And Shawn Porter said, ‘You know what? I want to unify.’ So he’s calling out Marcos Maidana as well.”

In fact, Porter, and his father and trainer, Kenny Porter, were brought into the ring following the announcement of Maidana’s victory over Broner.

“We asked Richard Schaefer. We said, ‘Hey, we want to unify.’ Richard said, ‘Well, if that’s what you want, then that’s what you will get,’ and he put his arm around Shawn and took Shawn over to the ring,” said Kenny Porter.

“As we got into the ring, Maidana had gotten out of the ring on the other side. But that’s what we want. We want to unify and then move on to the next big fight from there.” 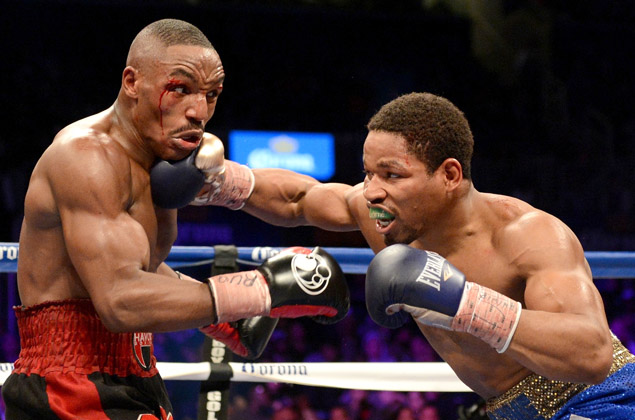 “Just because he lost the fight, you know, it was an exciting fight, and he was in trouble early on, and he came back. As Bernard Hopkins was sitting next to me during some of those rounds that Broner was in,” said Schaefer, “he said Broner was fighting on pure heart, and so, this is not the end for Broner. I mean, who wouldn’t want to see Adrien Broner again? He’s an asset to the sport, he’s exciting, he’s entertaining, so it’s a matter of going back to the drawing board.”

SCHAEFER: ‘MAIDANA HAD FIRE IN HIS EYES’

Schaefer said he saw similar determination in Maidana as when he was dropped three times while scoring two knockdowns during a sixth-round knockout win over future 147-pound beltholder Victor Ortiz in June of 2009.

“This was same fire in his eyes the same fire that I saw in his eyes when I saw him back in 2009 at Staples Center in Los Angeles,” said Schaefer.

“That was when he was in against another fighter where everybody felt that he was going to be the next big pay per view star. That was Victor Ortiz. You saw what happened there and here we saw it again. That same energy and desire and he showed who was the boss.”

Meanwhile, Broner was attempting to employ skills similar to those of boxer-punchers who have troubled Maidana in the past, including Alexander and Amir Khan, and technicians like Andriy Kotelnik, who have beaten him. Experienced ex-beltholders Erik Morales and DeMarcus Corley also hindered Maidana before losing decisions.

But since falling to Alexander, in his 147-pound Maidana’s past experiences helped him, as did having aligned with trainer Robert Garcia, who also handles fighters such as Rios, Nonito Donaire, Mikey Garcia and Brandon Rios.

“All of those frustrations, I think that, in a way, that he felt disrespected from Broner. All of that built up and it all came out when that first bell rang,” said Schaefer. “Maidana just unloaded. Marcos Maidana was not going to be intimidated by skills one bit and he was not going to be denied.”

GARCIA ON THE LEFT HOOK

During an earlier interview with RingTV.com Maidana said that part of the strategy heading into the bout with Broner was to drill shots to the body that would force him to be more stationary and also force his guard down.

“I think that my advantage will be that Adrien Broner is a guy that stays in one spot and likes to take punches and try to block punches. But he’ll drop his guard at some point. When he does that, that will help me, because once he puts his guard down and stays in one spot, you know what the outcome is going to be,” said Maidana, during an interview with RingTV.com last month.

“I’m going to cut off the ring and I’m going to make him stand still and fight and throw a lot of punches at him from the time that the bell rings. I’m never going to allow him to get comfortable in the fight. I’m not going to let him get going on his plan of work. I’m going to make Adrien Broner as uncomfortable as I can. That will lead to the stoppage. I know for a fact that once he feels my punches and my power, that Adrien Broner will either quit or end up getting knocked out, because he has never been tested. Trust me: I have the power to knock him out.”

Garcia said that opened a path for the left hook to land.

“The left hook was a punch that we had been practicing in the gym,” said Garcia. “Three or four punches with the right hand and then to finish up with the left hook.”

“It was a very tough fight. I had to show that I had a lot of heart to win this fight,” said Maidana. “Yes, he’s a very good puncher. He’s a good boxer and a good puncher.”


SCHAEFER: ‘IT WAS MARCOS MAIDANA’S NIGHT’

Broner has earned title belts over three weight classes, taking the WBO’s junior lightweight belt by third-round knockout over Vicente Martin Rodriguez in November of 2011, and the WBC’s lightweight title following an eighth-round stoppage of Antonio DeMarco in November of last year.

In his last bout in June, Broner jumped two weight divisions for his 147-pound debut with a split-decision victory that dethroned Paulie “The Magic Man” Malignaggi for the division’s WBA’s belt.

But Broner ran into a Maidana who was in pursuit of his fourth straight stoppage victory, a run includes knockouts of Jesus Soto Karass and Josesito Lopez.

“Broner has to go back to the drawing board. His defense clearly didn’t work. It was Maidana’s night, and, it was obviously the biggest night for Maidana. It opens door to many great fights for him at 147. As it relates to Adrien, having now, the second fight at 147,” said Schaefer.