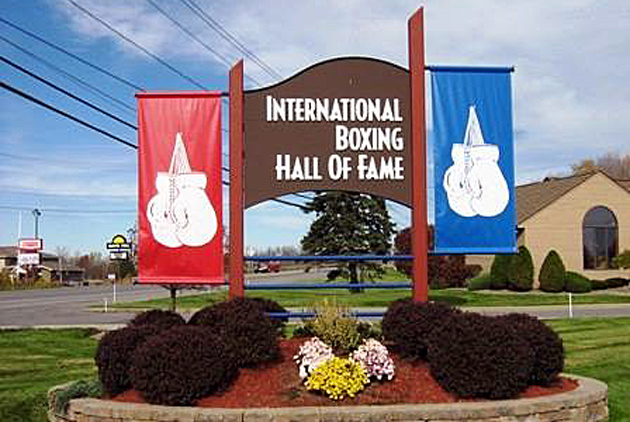 For those who are involved with the International Boxing Hall of Fame’s voting process, the period between Oct. 1 and Oct. 31 is one of introspection and deliberation. Every year, each elector charged with determining the Modern Class is mailed a ballot containing 45 names, from which a maximum of 10 can be chosen. The top three vote-getters, regardless of the actual number, will be officially inducted on June 8, 2014 in Canastota, N.Y., and we’ll find out who they are at 1 p.m. Wednesday at Hall of Fame’s pavilion.

Next year’s celebration will be particularly noteworthy, for not only does it mark the museum’s silver anniversary induction weekend but also because it is widely expected that first-year eligibles Oscar de la Hoya, Felix Trinidad and Joe Calzaghe will comprise the Modern class. If that happens, the Hall may well experience its third huge turnout in the last eight years, for record-setting throngs welcomed the inductions of Roberto Duran, Pernell Whitaker and Ricardo Lopez in 2007 and of Mike Tyson, Julio Cesar Chavez and Kostya Tszyu (as well as actor Sylvester Stallone) in 2011.

Your humble scribe has been part of the voting procedure since 2001 and each time the task has been approached with utmost seriousness. That’s because, in a very real sense, the Hall of Fame ballot is the final battlefield for these ring legends. The terms of warfare, however, are far more nebulous, even in this most subjective of sports.

First, each man is competing against 44 other fighters instead of just one. Second, they can’t influence the outcome by swapping punches with a live foe (thankfully for us electors) because their only weapons are their resumes and individual legacies. Finally, the verdict will be rendered not by a majority of three judges but rather a collective of jurists with vastly divergent levels of knowledge, unique biases and countless differences in life experience. Those who feel a need to research the nominees more deeply can log on to the Boxing Writers Association of America’s web site (BWAA.org), where detailed biographies of each candidate have been written. Despite this valuable resource, one can never predict how a given elector will use the information presented to him, much less how more than 200 will do so.

Many electors choose to be extremely selective with their check-marks — I’ve spoken with writers who vote for three or fewer fighters each year — while others, like myself, utilize the maximum 10 even in years when the final results are patently obvious. I do this for two reasons: First, I usually find at least 10 – if not more – that are worthy of my consideration and second, one never knows when a vote or two will tip the scale one way or the other. Even in years like 2007, 2011 and 2014 when the roster is seemingly set in stone, voters can still take a symbolic stand if they feel strongly enough about their favorite candidates.

In 12 previous ballots only once did I not make the maximum number of check marks. In fact, more often than not, I strained to whittle my choices down to 10 and such was the case again this year. The following article will detail that winnowing process in the hopes that the reader will gain an insight as to the what’s and why’s behind each decision.

So without further delay – in the words of Hall of Fame ring announcer Jimmy Lennon Jr. – here we go:

Impulse Choices: It took about 10 seconds to find and affix checks beside the names of “The Golden Boy,” “Tito” and “The Pride of Wales,” and the reasons I did so were detailed in an article I wrote last year about future candidates. It took just a little longer than that to find four more names I’ve previously deemed worthy of inclusion: 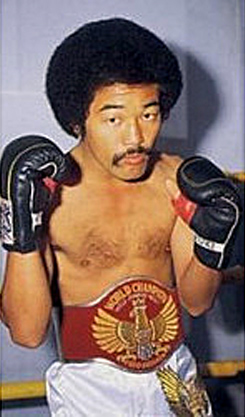 Yoko Gushiken– In recent years the voters have done a much better job of bestowing proper recognition to boxing’s littlest giants. In 2006 junior flyweight monarchs Michael Carbajal and Humberto “Chiquita” Gonzalez were elected while 105 and 108 pound titlist Ricardo Lopez was honored in 2007, longtime junior flyweight king Jung Koo Chang in 2010, two-division titleholder (112 and 115) Mark “Too Sharp” Johnson in 2011 and 108-pound defenses record-holder Myung Woo Yuh in 2013.

In my opinion, the man nicknamed “Kanmuriwashi” (“Fierce Eagle”) is just as worthy, for during his four-and-a-half year reign as WBA junior flyweight king (1976-1981) he stuffed in 13 title defenses to break Luis Estaba’s then-division record of 11, proof of his skill and consistent superiority. Though best known for his uncommon power for an 108-pounder (he stopped eight challengers, including six in a row), the Japanese southpaw also was a superior technical fighter in terms of stance, punch selection and execution. His best victories came against Jaime Rios (a title-winning W 15, KO 13), former WBA junior flyweight titlist Juan Antonio Guzman (KO 7), Rigoberto Marcano (W 15, KO 7), future 115-pound belt-holder Rafael Pedroza (W 15), former flyweight king Alfonso Lopez (KO 7), perennial title challenger Martin Vargas (KO 8) and future conqueror Pedro Flores (W 15). Gushiken retired just three months short of age 26 following his sole loss to Flores (KO by 12), so he was able to jam in plenty of good work before leaving the game. His name has been on the ballot ever since I began voting 12 years ago and I remain baffled as to why he remains on the outside looking in. 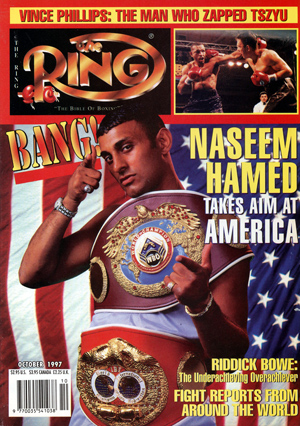 Naseem Hamed– “The Prince’s” legion of critics will disqualify him for his lone defeat against Marco Antonio Barrera because it was a technical undressing of epic proportions. His brash, in-your-face persona also rubbed many observers the wrong way, as did his blatant ducking of longtime WBO mandatory challenger Juan Manuel Marquez. I, however, placed more weight on the positives than those justifiable negatives. They include his lengthy reign as WBO featherweight king (15 defenses over nearly five years) as well as victories over Manuel Medina (KO 11), Tom Johnson (KO 8), Kevin Kelley (KO 4), Wilfredo Vazquez (KO 7), Wayne McCullough (W 12), Cesar Soto (W 12) and Vuyani Bungu (KO 4) – all of whom were champions or former champions. Had it not been for boxing politics, Hamed would have been at least a three-belt monarch and perhaps the undisputed champion but there is no “might have been” about the following statement: Hamed was one of the hardest punching featherweight boxers ever to walk the earth. His resume, one-of-a-kind talent and enormous punching power more than override the embarrassing single loss to Barrera, who, by the way, should be a “no-brainer” choice when his first turn comes for the Class of 2017.

Dariusz Michalczewski– This year marks “The Tiger’s” fourth time on the ballot, and it was the fourth time I checked his name. Longevity and resume count big with me and Michalczewski has plenty of both. His 23 consecutive defenses of the WBO light heavyweight title during a nine-plus year reign (1994-2003) is second only 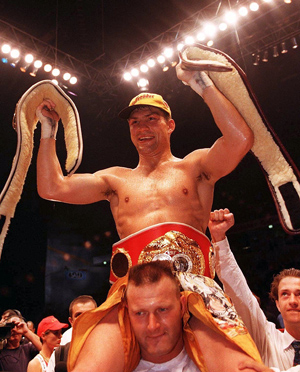 to Joe Louis’ 25 and for a moment, courtesy of his dominant decision over WBA/IBF king Virgil Hill, he was a three-belt title-holder and the lineal champion when Roy Jones Jr. was far and away the most talented. He only gave up the WBA and IBF belts when both bodies demanded he defend against each of their mandatory challengers within an insanely short period of time – something they don’t do with fighters who they feel will make them more money in the long run, unified titles or not. He beat several of the same fighters Jones did (Hill, Montell Griffin, Richard Hall and Derrick Harmon) and in many cases he did so just as soundly. He dethroned a talented fighter in Leeonzer Barber to win his initial 175-pound belt and he also enjoyed a brief reign as WBO cruiserweight king after stopping Nestor Giovanini in his next fight after beating Barber.

The only down side to his candidacy in my eyes was that he never met Jones head-to-head when that match was the best that could be made at 175. The battle lines were clear and intractable: Michalczewski wouldn’t leave Germany because he didn’t have enough mainstream name recognition in America to draw the necessary money to justify the risk while Jones refused to fight in Germany because he saw himself as the far bigger attraction and he feared a repeat of the Park Si Hun debacle that denied him his rightful gold medal in the 1988 Seoul Olympics. In my eyes, Michalczewski is a Hall of Famer and should be voted into the Hall as soon as possible.

Hilario Zapata– In my nearly 40 years as a boxing fan, I have never seen a flashier defensive fighter than the Panamanian southpaw. Hall of Fame boxing writer Joe Koizumi once wrote that the mantis-like Zapata “had more moves than a snake on a hot sidewalk” and those moves often mesmerized opponents into inaction and bewilderment. The squat move that Pernell Whitaker used as a showboating maneuver was a standard part of Zapata’s repertoire, for the jack-in-the-box action made him even harder to hit than he already was. Defensive specialists are usually marginal watches – at best – but for this purist his extraordinary variety and flamboyance were a delight. 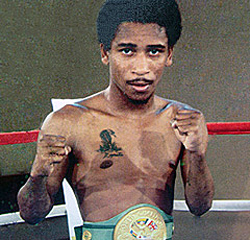 Like Gushiken, Hamed and Michalczewski, Zapata boasted long-term excellence at the highest levels and that’s why he earned my check. In 24 title fights he went 18-5-1 and his best victories include former two-division titlist Freddy Castillo (W 12) before he won his first belt as well as 108-pound title fight wins over Shigeo Nakajima (W 15, KO 11), German Torres (W 15), Joey Olivo (KO 13), Netrnoi Sor Vorasingh (KO 10), Hall of Famer Jung Koo Chang (W 15) and Tadashi Tomori (W 15, KO 8), all of whom held belts at one time or another. After rising to 112, he bested Alonzo Gonzalez (W 10, a title-winning W 15), Javier Lucas (W 15), Suichi Hozumi (W 15), Dodie Boy Penalosa (W 15), Alberto Castro (W 15) and Claudimir Dias (W 15) before Fidel Bassa captured a disputed decision and an even more disputed draw in back-to-back bouts. Zapata is one of only five fighters in boxing history ever to surpass 300 rounds in championship competition (303) and he won title bouts in South Korea, Japan, the Philippines, Thailand, Venezuela and the United States – and he won most of them by decision, a superlative achievement given his profound lack of fight-saving KO power. Like Gushiken, Zapata is someone who has been long overlooked by a majority of voters and hopefully his time will come sometime soon – like the Class of 2015.

The Deliberations: With three checks remaining I confronted a common quandary – too many candidates and too few slots. As I scanned the ballot I wrote down each name that commanded my attention on a spiral notebook and when I finished I discovered I had seven finalists.

The winnowing process is by far the toughest part of the job, for even after weighing the various pros and cons of each candidate and making the final choices I still walk away feeling as if someone worthy was left in the cold, at least for one more year. Each has strong points and drawbacks that played into the decision-making process and the following are the issues that created the strongest impressions on either side:

(Editor’s note: click on the NEXT button at right to continue the article.)