THE RING Magazine January issue: At a glance 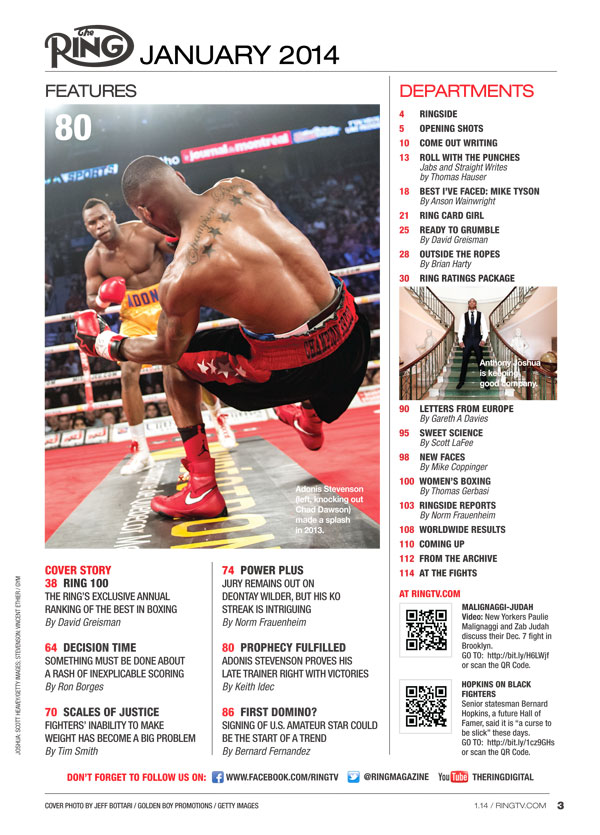 The heated debates over where a particular fighter ranks among his peers are a wonderful part of boxing.

Everyone has an opinion about whether Fighter A deserves to be on the pound-for-pound list or is overrated. What about Fighter B? He gets no respect in spite of a series of exceptional performances. And Fighter C? Forget him for now. His resume is too thin.

The beauty of such give-and-take is that no one is wrong. This is a purely subjective exercise, although we like to think we use sound reasoning.

That was our mindset when we enlisted boxing aficionados David Greisman, Martin Mulcahey and Anson Wainwright to compile the annual RING 100, our list of the 100 best fighters in the world.

Our earnest correspondents spent many hours poring over information about all candidates and watching fights on YouTube, which we believe has resulted in a list that is as solid as ever this year.

Does that mean you will agree with every one of their decisions? Absolutely not. You have your own opinions on who belongs and who doesn’t. 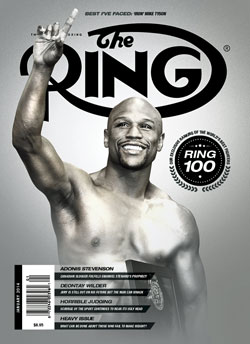 The purpose of the list is merely to have some fun and provoke the aforementioned debates, which will always be part of the boxing experience.

As part of the RING 100 package, we also provide a list of fighters entering and leaving the list this year. And we indicate the number of ranked fighters in each of the 17 weight classes.

So enjoy, and, of course, let us know what you think by emailing us [email protected].

Elsewhere in the issue, our intrepid Wainwright caught up with none other than Mike Tyson, who revealed his toughest opponents in one of our most interesting versions of Best I’ve Faced. ÔÇª

Ron Borges, in Cards Stacked Against Boxing?, writes that a never-ending rash of bad decisions is damaging the sport and implores boxing’s movers and shakers to push very hard for change.

We include with that article an ignominious list of seven horrible decisions over the past year and a half. ÔÇª

In Beyond the Limit, Tim Smith explores another growing problem in boxing: The tendency of fighters to fail to make weight, which might’ve reached a new low when Julio Cesar Chavez Jr. made a mockery of weight limits for his fight against Bryan Vera. ÔÇª

Norm Frauenheim writes in Path of Destruction that Deontay Wilder still has a great deal to prove but clearly has prodigious punching power. Thirty knockouts in 30 fights leaves little doubt about that. ÔÇª

In Steward Would be Proud, Keith Idec writes that RING light heavyweight champ Adonis Stevenson fulfilled the prophecy of late trainer Emanuel Steward, who said he would defeat Chad Dawson and Tavoris Cloud.

Stevenson joined a select club of fighters with strong ties to Canada who won RING championships when he stopped Dawson. ÔÇª

And Bernard Fernandez writes in Flash Point that U.S. amateur fighter Erickson Lubin’s decision to sign a professional contract with Mike Tyson rather than pursue an opportunity to fight in the 2016 Olympics could have a ripple effect.

USA Boxing was so concerned that officials wrote an open letter to Tyson imploring him not to sign the nation’s top Olympic hopefuls. ÔÇª