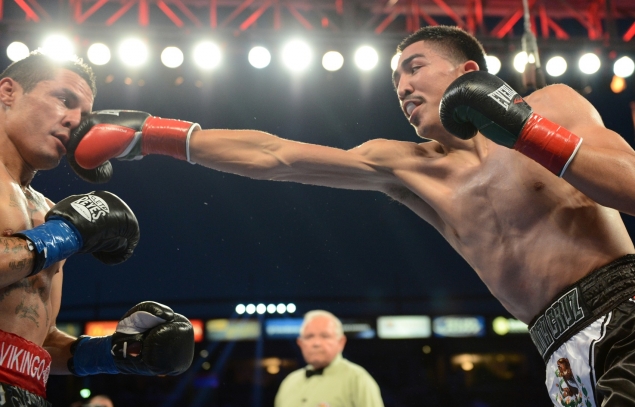 The last time Mexican-American Leo Santa Cruz fought a southpaw was in June of 2012, when he fought Vusi Malinga for the IBF’s vacant bantamweight belt.

A 25-year-old two-division titlewinner, Santa Cruz (25-0-1, 15 knockouts) will step into the ring opposite another left-hander on Dec. 14 at The Alamodome when he takes on Puerto Rico’s Cesar Seda (25-1, 17 KOs) on Showtime.

Even though Santa Cruz pitched a virtual shutout against Malinga, he is leaving nothing to chance during his preparation for Seda.

“The southpaw style is definitely a difficult style,” said Santa Cruz, who defended the belt he won from Malinga three times — twice by stoppage — before winning his 122-pound debut by fifth-round knockout over Alexander Munoz in May.

“I know that I’m good at fighting the southpaws, too. I’m very used to their style. I’ve been fighting southpaws in the gym, working on things that will help you against southpaws. With my trainers in the corner, I’m always working on that style. I think I’ll be prepared for that.”

In facing Seda, Santa Cruz will be making the first defense of the WBC junior featherweight belt he won by third-round knockout over Victor Terrazas in August.

Seda, 27, has been on a roll, having won five straight, including two by stoppage, since rising in weight after a unanimous-decision loss to WBO 115-pound titleholder Omar Narvaez in 2011.

He is on a quest to restore glory to Puerto Rico, whose last reigning titleholder, Roman “Rocky” Martinez, was dethroned as WBO junior lightweight beltholder with an eighth-round knockout loss to Mikey Garcia on Nov. 9.

“There’s no pressure at all,” said Seda. “That’s what we’re working hard for. We’re working very hard in the gym and in the conditioning and the strengthening. Remember, I fought Narvaez, and I lost my undefeated record to him, and that gave me a great deal of experience.

“During the fight, we were winning and we were comfortably ahead in the fight, and they started deducting points and calling low punches. That frustrated me a little bit and made me look for just one punch. But we learned a lot from that and that will show come Dec. 14. … What I learned from that fight is not to get discouraged and to stick to your game plan.”

Fans have come to expect all-action affairs with Santa Cruz, and another such bout is likely given Seda’s penchant for body punching.

“I’m starting to feel some pressure, but that’s why I train so hard in the gym,” said Santa Cruz. “Every time out, I work harder, and every time out I try to improve. I know that the fans; that’s what they want to see.

“I’m in the gym in the morning, go home, eat, rest, and then I do my training. I live in the gym. I like to please the fans. I like to hear them saying good things about me. I’m always going to put on a good show. I’m don’t ever want to disappoint them.”

That vision still includes a matchup with Abner Mares, who lost his title by first-round knockout to Jhonny Gonzalez the same night Santa Cruz vanquished Terrazas. Mares was a heavy favorite, and many expected him to face Santa Cruz next.

“When that happened, I couldn’t believe that he had gotten knocked out. I thought that he was going to win the fight, but you know things happened,” said Santa Cruz.

“That didn’t really affect me, because it was just a quick knockout. We don’t know what would have happened had he been able to go the the distance or if he would have come back. Nothing has changed. I think that the fight between us can still happen.”

Not if Seda can help it.

“I know that he’s a very good fighter, and that he’s got all of the qualities that you need to be a champion. He’s a good boxer and a good puncher, but I’m training very, very hard … like I would against any good Mexican,” said Seda.

“I’m going to be fighting hard for Puerto Rico and I think that you’re going to get a war. I have the tools, the smarts, and all of the ability to beat a fighter like him, and you’re going to have to wait and see what I’m talking about on Dec. 14.”

Also on the Broner-Maidana undercard, hard-hitting welterweight standouts Keith Thurman and Jesus Soto-Karass will face each other, and WBA light heavyweight beltholder Beibut Shumenov will defend his belt for the first time since June 2012 against unbeaten Tamas Kovacs.

Former undisputed middleweight champ Jermain Taylor, who has not fought since stopping Raul Munoz in October 2012, will face Juan Carlos Candelo on the card.