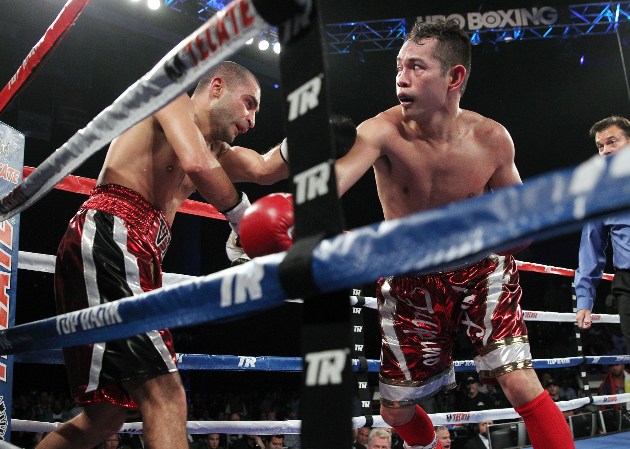 RingTV.com has a live round-by-round update of tonight’s featherweight rematch that ended with a ninth-round TKO victory at the 2:06 mark for former RING junior featherweight champion Nonito Donaire over ex-flyweight and 115-pound beltholder Vic Darchinyan. The fight was part of an HBO tripleheader airing live from American Bank Center in Corpus Christi, Texas.

In his last fight in April, Donaire lost by unanimous-decision to Guillermo Rigondeaux as a 122-pounder, and made his featherweight debut against Darchinyan.

Darchinyan had won two straight since losing consecutive unanimous decisions to Anselmo Moreno and Shinsuke Yamanaka, and was coming off a fourth-round stoppage win over Javier Gallo in May.

DONAIRE WINS BY NINTH-ROUND TKO at THE 2:06 MARK

Round 1: Donaire moving forward behind the jab. Southpaw Darchinyan pawing with his jab. A lot of posing. Tough round to score. Donaire’s right to the body. Grazing rights to the head and body by Donaire. Hard left hand and another by Darchinyan to punctuate the round. Enough to win it. Darchinyan, 10-9.

Round 5: Each fighter landed seven punches in the fourth. Darchinyan’s leading with the left, but takes a couple of rights to the body. Darchinyan’s controlling the round against a seemingly tentative Donaire. Jab by Donaire. Left to the body by Darchinyan. HARD LEFT HAND ROCKS DONAIRE TO THE ROPES, WHERE DARCHINYAN CLOSES STRONG with a series of lefts and rights as Donaire covers up in the corner. Darchinyan, 10-9; Darchinyan, 48-47.

Round 7: Darchinyan’s corner is confident, Donaire’s trainer, Robert Garcia wants more movement and punches from Donaire. Steve Weisfeld has it even at 57-57. Each has landed 35 punches in the fight. Donaire’s having success landing the right and then lands a left. Two right hands by Donaire. Two left uppercuts by Darchinyan. Fighters tied up and both fall to the canvas, with Darchinyan on top. They rise and are OK. Donaire tentatively has an edge in the round. Two lefts and a right prior to the bell for Donaire. Donaire, 10-9; Darchinyan, 67-66.

Round 9: Garcia’s telling Donaire not to blow the fight and that he’s giving it away. Clearly, Garcia’s worried. Weisfeld has it even, 76-76. Right and a LEFT HOOK HURTS DARCHINYAN. LEFT HOOK DROPS DARCHINYAN, WHO RISES BY GRABBING THE ROPES!!! RIGHT HAND AND LEFT HOOK WOBBLE DARCHINYAN AGAIN!!! RIGHT HAND, LEFT HOOK, TWO LEFT UPPERCUTS BY DONAIRE!!!! REFEREE LAURENCE COLE STEPS IN AND STOPS THE FIGHT!!!

DONAIRE WINS BY NINTH-ROUND TKO at THE 2:06 MARK