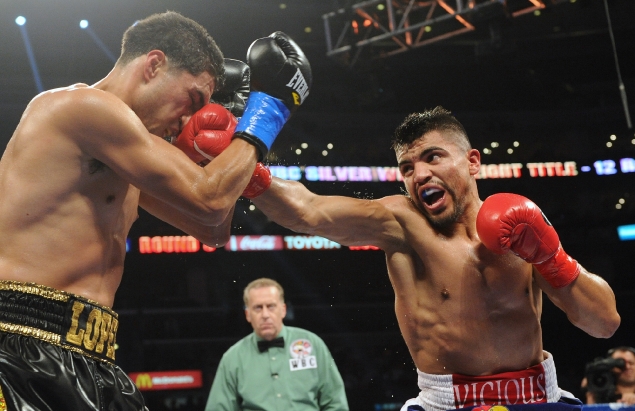 Golden Boy CEO Richard Schaefer and matchmaker Eric Gomez confirmed an earlier report that former welterweight titleholders Victor Ortiz and Luis Collazo will meet at Barclays Center in Collazo’s hometown of Brooklyn on Jan. 30. The bout will be televised on Fox Sports 1.

Ortiz-Collazo will take place three days before the NFL’s Super Bowl, which will be held on Feb. 2 at MetLife Stadium in East Rutherford, N.J., less than an hour drive from Brooklyn.

“You look at the stage and that it’s during The Super Bowl weekend, which means that the world’s attention is going to be on New York,” said Schaefer. “This will be part of the Super Bowl activities, so I’m very excited about this and very appreciative as well that Fox Sports 1 has stepped up to make this fight a reality.”

Schaefer said that Ortiz-Collazo and The Super Bowl will be part of a frenetic week of Fox Sports programming that includes a UFC event.

“As you know, Fox Sports 1 is the home of the UFC as well, and they’re generating major ratings there. So when they decided to go to boxing, I knew that they were going to be a terrific partner because they really know how to promote and the really know how to elevate, and they’ve proven that with the UFC,” said Schaefer.

“So, for us to be there during Super Bowl week, alongside a UFC that week, and then to have the big Super Bowl game on Sunday, with that kind of lineup, it’s great for the sport of boxing and great for the fighters. Imagine the exposure the fighters will get. Of course, our sponsors are extremely excited about it these kinds of platforms.”

Meanwhile, Ortiz will be ending an 19-month ring absence, having been cast for a role in the third installment of Sylvester Stallone’s The Expendables and Dancing With The Stars.

“It’s a great fight, and a very meaningful fight. Everybody loves it. It’s not a comeback fight for Victor, it is a fight where whoever wins that fight gets right back into the middle of the mix at 147, so we’re very excited about it,” said Schaefer. “The early response that I’ve gotten from fight fans is that they love the fight. The Barclays Center is thrilled about it, and, most importantly, the fighters are very enthusiastic about this fight.”

Ortiz was to be on the Dec. 14 Adrien Broner–Marcos Maidana card televised by Showtime before his scheduled opponent, Alfonso Gomez, suffered a hand injury and had to pull out of the fight.

“I shot a movie. I did Dancing With Stars. But through all that, in the back of my mind, I kept telling myself that I will be world champion again,” said Ortiz during a Nov. 1 press conference. “And that’s why I am here. Enjoy these fights. We have some of the greatest fighters of this era up here, so you are in for a treat. I will be world champion again, like it or not. Step aside. I am here.”

An all-action fighter, Ortiz (29-4-2, 22 knockouts) was last in the ring in June of 2012, when he suffered a ninth-round stoppage loss to Josesito Lopez after which he required a two-hour surgery to repair a broken jaw.

Following a majority draw with current IBF 140-pounder beltholder Lamont Peterson in 2010, Ortiz debuted as a 147-pounder and dethroned Andre Berto as WBC titleholder by unanimous decision. There were four knockdowns in Ortiz-Berto — two by each fighter.

In his next fight in September of 2011, however, Ortiz lost the belt by fourth-round knockout to Floyd Mayweather Jr. before facing Lopez.

Collazo (34-5, 17 KOs), 32, has gone 3-0 with one knockout since falling by 10-round unanimous decision to Freddy Hernandez, who dropped him in the eighth round in October of 2011. In his last fight, Collazo scored a unanimous 10-round decision over Alan Sanchez in Texas.

“I think that it’s great to see that Fox is very quickly becoming a major player in boxing as well, and that Fox is very happy about the ratings that they have been doing on the Golden Boy Live Monday night boxing,” said Schaefer. “So this is basically an evolution of that, and I think that you’re going to start to see, every year, a few more bigger budget shows like this one to be aired on Fox Sports 1.”