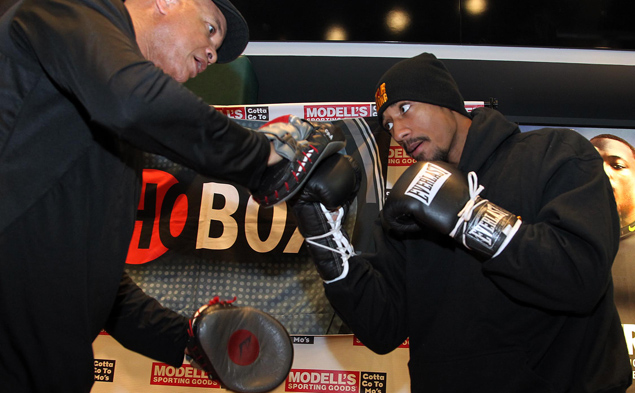 Junior middleweight Demetrius Andrade already has stated that he plans to go for the stoppage victory against fellow U.S. Olympian and unbeaten contender Vanes Martirosyan for the WBO’s vacant belt on Saturday in Corpus Christi, Texas. The fight will be televised on HBO.

A 25-year-old southpaw, Andrade (19-0, 13 knockouts) not only believes that he can win impressively against Martirosyan (33-0-1, 21 KOs), but he also feels the same way about the rest of the fighters in what has become a hot and active 154-pound division.

“This win is going to let people know that I’m here, and that I’m here to stay,” said Andrade. “No longer can people avoid me. They’re going to have to take this fight with me, one way or another.”

Mexican star Canelo Alvarez was dethroned as RING and WBC 154-pound champion in September by Floyd Mayweather, who plans to return to action in May while Alvarez has vowed to do the same on March 8, July 26 and Nov. 22 of 2014.

Among the top considerations for Alvarez are junior middleweights Miguel Cotto  and Carlos Molina, the latter being the IBF’s 154-pound titleholder who could also be challenged by Alfredo Angulo in January.

“I’m planning on going for the knockout, but none of those guys really matter to me right now,” said Andrade, a 2008 Olympian who will face Martirosyan in the wake of a unanimous decision victory over Freddy Hernandez in January after a streak of four consecutive stoppage victories. “This fight, I’m not leaving it in the judges’ hands. My plan is going to be to go in there and send a statement out to the world.”

A 2004 Olympian, Martirosyan, 27, is coming off a second-round knockout of Ryan Davis in June that followed last November’s draw with Erislandy Lara, who will battle fellow left-hander Austin Trout on Dec. 7 at Barclays Center ini Brooklyn on Showtime.

Also on Dec. 7 on HBO from Boardwalk Hall in Atlantic City, left-handed puncher James Kirkland ends what will have been a 21-month ring absence against unbeaten prospect Glen Tapia.

“Everybody that you can name in the division, I’m calling them out. I’m just letting the world know that I want to fight them,” said Andrade. “Then, I’ll bust them up. So, therefore, I’ll have to be the one that the red-haired kid [Alvarez] and everybody else has to fight.”

Asked if he learned anything from watching the Lara-Martirosyan fight, which ended on ninth-round cuts on Martirosyan caused by an accidental clash of heads, Andrade said, “Yeah, stay way from those head butts.

“Lara is smaller than me. I’m longer than him, I’m faster than him, and I’m stronger than him,” said Andrade, who stands 6-foot-1. “There is nothing that I can see that Martirosyan can do with me. My job is to prepare and train well. I know what I’m capable of doing and I’ve seen what he’s capable of doing. Our capabilities are totally different.”

Andrade assessed several of the division’s fighters as well as his chances against them, below.

Miguel Cotto (38-4, 31 KOs): “I would stop him, too. I would stop him just because he’s smaller, and I’m longger, and I would have him walking into punches all night long. I think that cuts would definitely be a factor.”

Austin Trout (26-1, 14 KOs): “Probably the same thing as Lara. I’m a southpaw, and so is he, but I’ve got a little more flash and I’m faster. I think that I would be able to fight him. I’m not sure what his jaw can take, but if I can stop him, then I’ll stop him, too. We fought back in the day, as amateurs, and I beat him then.”

James Kirkland (31-1, 27 KOs): “I would stop him, too. He’s short and he likes to just rush in and try to throw these long-assed hooks. He would be walking into punches all night long, too. I ain’t going to let him just walk in.”