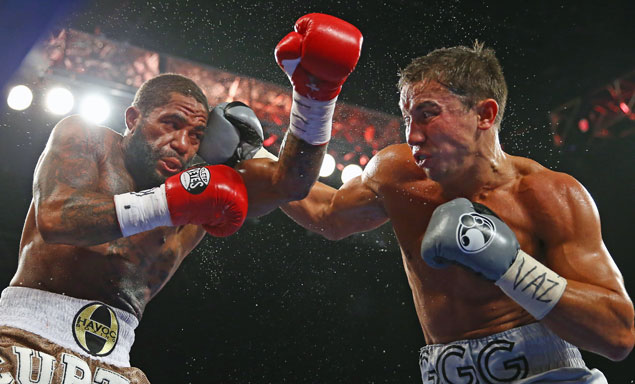 NEW YORK, N.Y. — Gennady Golovkin is a 160-pound, blunt-force instrument with an arsenal of punishing punches. He unleashed his full array on Curtis Stevens, a game challenger, and bludgeoned his way to an eighth-round TKO victory to retain the WBA middleweight title at the Theater at Madison Square Garden on Saturday night.

Stevens fought valiantly, but had no answers for Golovkin’s power, which has now led to his stopping 15 straight opponents. Golovkin dropped Stevens in the second round and rained a steady shower of heavy shots on Stevens head and midsection until Stevens’ trainer and uncle, Andre Rozier, asked referee Harvey Dock to stop the fight at the end of the eighth round.

“I have one question for him during the week. Are you serious?” Golovkin said after the fight, a reply to Stevens who had taunted Golovkin and had promised to be Golovkin’s equal in the power department. “Yes, I am serious. I respect everybody. It’s in the spirit of the sport.”

Stevens (25-4, 14 KOs) drew praise for his courage in the face of Golovkin’s assault.

“I have nothing to be ashamed of. I’m better than anyone gave me credit for,” Stevens said. “I’ve shown more in this fight in a loss than most people have shown in a win. This is not the end for me. I will learn from my mistakes and I will be back.” 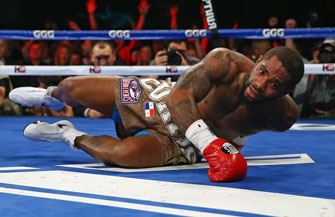 A star-studded crowd of 4,618 turned out for an entertaining night in the newly renovated Theater at Madison Square Garden. Even though it was the small room, it was jam packed with celebrities.

Heavyweight champion Wladmir Klitschko, who along with his brother Vitali is Golovkin’s promoter at K2 Promotions, sat ringside with his fianc├®, actress Hayden Panittiere. It was the first time that Klitschko had seen Golovkin in a match in the United States. Academy Award winning actress Susan Sarandon was also at ringside a few seats away from James Dolan, the owner of Madison Square Garden.

All the stars and luminaries had come expecting to see the emergence of Golovkin as one of the next brightest stars in the boxing galaxy. They weren’t disappointed. Golovkin (28-0, 25 KOs) is on HBO’s fast track to stardom. Stevens said he was going to derail those plans. He had criticized Golovkin for having faced a slew of blown-up junior middleweights. And though Matthew Macklin was a legitimate middleweight, Stevens said Macklin was afraid of Golovkin’s power.

Even though Golovkin had knocked out 14 of his opponents coming in against Stevens, there were still questions as to how he would fare against a legitimate middleweight contender.

While most of the top flight contenders had been reluctant to step forward to provide any answers, Stevens ran to the front of the line. Fighting out of Brownsville, Brooklyn, Stevens had been one of the most decorated amateurs in New York City. Like Golovkin, Stevens was noted for his heavy hands and knockout power.

Stevens had waited eight years for his opportunity to fight for a world title. He had picked up a Golden Gloves championship as an amateur in the very same room in 2002. He thought history was on his side against Golovkin.

As the fight drew closer, Golovkin had grown tired of Stevens’ incessant trash talking. Early on he had tried to ignore the talk and Stevens’ antics. But by fight week, Golovkin was talking about what a big mouth Stevens had and how he wanted to shut it for him on fight night.

When the two collided in the ring, everyone expected an explosion of heavyweight proportions. 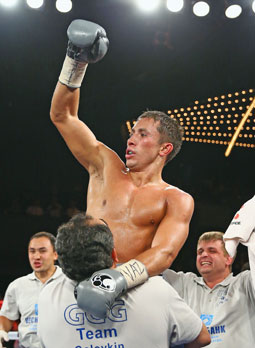 Stevens was true to his word. From the opening bell he showed no overdue respect of Golovkin’s power. That came back to bite him in the second round when Golovkin landed a thunderous left hook that caught him square on the jaw and sent him reeling backwards to the canvas. With his eye widened in amazement and shock, Stevens made it up by the count to his feet by the count of seven, but he looked unsteady. Good thing for Stevens that there were only 10 seconds left in the round and he survived.

“I wasn’t surprised he was able to get up,” Golovkin said.

But Golovkin was in his stalking mode when he came out for the third round and Stevens was more wary of Golovkin’s power. It took two rounds but Stevens had shaken off the cobwebs by the fourth round and was back in the fight. He backed up Golovkins and put him on his heels with a left-right combination straight down the middle that found a home on Golovkin’s chin near the end of the round.

By the fifth round Stevens’ left eye was badly swollen and Golovkin was landing heavy shots – left hooks, straight rights, a jack hammer jab – all finding their mark on Steven’s head and midsection.

“I was able to use my array of punches that I used in the gym and I was able to break him down,” Golovkin said. “He was strong and I was a little cautious of his strength, but I never felt I was in any trouble.”

Stevens gamely fought on through the middle rounds. By the eighth round as Stevens was retreating from Golovkins’ onslaught it appeared to be just a matter of time before all those shots to the body would whittle him down.

Golovkin landed 56 power shots in the eighth round and Stevens’ corner had seen enough and asked Dock to stop the fight. Stevens didn’t protest the stoppage. It was a merciful conclusion to what was turning into a lopsided beating.

Golovkin is now indeed on the fast track to the top. He is fit and primed to fight anyone in the middleweight division.

“I’m willing to fight anybody in the sport. But specifically I want to fight Sergio Martinez,” Golovkin said.

Tom Loeffler, Golovkin’s promoter at K2 Promotion, said Golovkin’s next fight will be in Monte Carlo, Monaco on Feb. 1. There is no opponent set, but Loeffler said it will be a quality opponent. He said they are still negotiating with HBO as to whether they will broadcast it.

Loeffler said Martinez and Julio Cesar Chavez, Jr. are both on Golovkin’s radar screen. Martinez was once considered the top middleweight in the division, but having taken off a year and with Golovkin roaring through four opponents this year Martinez’s luster has dimmed.

“Gennady is the best middleweight in the division right now,” Loeffler said.

It’s hard to argue with him on that.