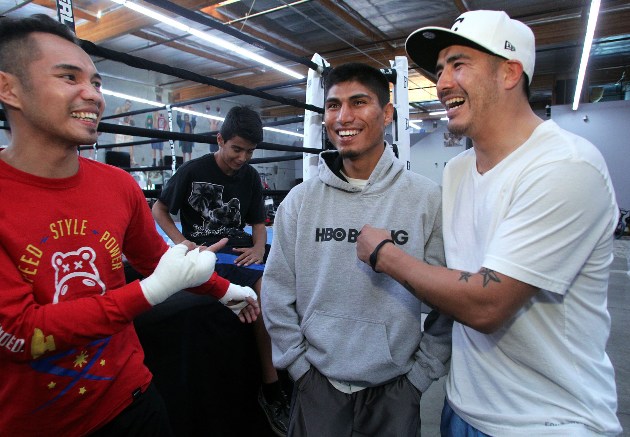 It stands to reason that Alex Ariza would be a seemingly endless source of inside information for Brandon Rios and his trainer, Robert Garcia, given that Ariza has worked the past 10 fights of Rios’ upcoming rival, Manny Pacquiao, including his two consecutive losses.

But during a national conference call earlier this week promoting his welterweight clash with Pacquiao (54-5-2, 38 knockouts) in Macau on Nov. 23 (Nov. 24 in China) on HBO Pay Per View, Rios and Garcia insisted that providing isecret infomation is not among the roles of their newly-acquired strength and conditioning coach.

Ariza began working with Rios (31-1-1, 23 KOs) last month after being fired from Team Pacquiao. He was an assistant to trainer Freddie Roach for a span of 10 fights comprising an 8-2 record that includes four knockouts.

A former lightweight titleholder, Rios is targeting a successful 147-pound debut against Pacquiao with Ariza’s help after having split 140-pound victories against Mike Alvarado.

Rios was last in the ring against Alvarado in March, falling by unanimous decision after having scored a seventh-round stoppage win over Alvarado in October of 2012.

“As far as the personal thing, I still consider [Pacquiao] a friend. I don’t have a vendetta or want any kind of reciprocity. It’s just I have to come here now, I have a new fighter and a new responsibility and my job is to win. That’s what I’m here for,” said Ariza, during a recent interview with RingTV.com.

“I think people emphasize too much on [the personal aspect], and it kind of makes me wonder how many people have ever played sports before. I grew up playing sports my whole life. There’s just some times when my friend is on the other team and he ends up pitching against me and I have to hit off of him. It’s nothing personal, it’s just part of sports.”

Garcia was last in the corner opposite Pacquiao in 2010, when the Filipino superstar earned the WBC’s junior middleweight belt with a bloody and dominant unanimous decision over Margarito.

Since then, however, Pacquiao has gone 2-2, having lost by split decision to current WBO beltholder Tim Bradley in June 2012, and by sixth-round stoppage to Marquez last December.

“There’s a lot of things that we’ve seen in Pacquiao’s past three or four fights. I don’t see the same Pacquiao of five years ago. I know that a lot of people will agree with me, but we still need to prepare for that scary Pacquiao,” said Garcia of Pacquiao, an eight-division titlewinner who turns 35 in December.

“Margarito had to come down in weight, which really, really hurt him, to get to that catchweight. He had gotten destroyed in his previous fight against Shane Mosley. That was a big issue. The age. Brandon’s younger than Margarito, which was three years ago. Since then, Pacquiao has lost to Bradley and gotten knocked out by Marquez. So, those are things that we’ve got to take advantage of.”

Rios said that he expects to be not only bigger than Pacquiao, but also, at least as fast.

“I’m already a physically strong guy, but Ariza’s got some good work ethics. He’s making me faster. He’s making me more light on my feet. He’s been great and been working very well,” said Rios, who is 27.

“Like Robert said, there has not been one mention of what Pacquiao does wrong or anything like that. We don’t need any of that stuff. We just do hard work and get the job done. That’s what we do. Ariza is great at what he does, and we have a great workout…I’m using him and we see great results.”