Britain’s John Conteh had everything. He was immensely talented, good looking and during the early 1970s competed in the heavyweight division, which was the focus of the boxing world’s attention.

Promoters and managers were in fact looking for a British version of Muhammad Ali but ironically it was “The Greatest” himself who advised Conteh to switch lanes after 18 professional bouts.

“I fought on the Ali-(Joe) Bugner undercard in 1973,” said Conteh. “It was in Las Vegas and I was fighting Terry Daniels, who had challenged Joe Frazier for the heavyweight championship of the world a year earlier. 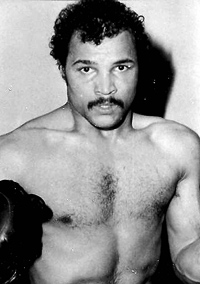 “I asked Ali for advice and he told me to get out of his division because I wasn’t big enough. That was the best advice he could have given me because I dropped down to light heavyweight and won the European title in my very next fight.”

Conteh never looked back and seized the vacant WBC light heavyweight crown on Oct. 1, 1974 with a 15-round decision over Jorge Victor Ahumada in London.

It was an incredible achievement for the 23 year old who gave it everything he had in a pulsating encounter.

Over the next six years the Liverpool star mixed with some of the best 175-pound warriors of his generation and, despite an early retirement, his accomplishments within the sport should never be forgotten.

RingTV.com recently spoke to Conteh, one of the most underrated champions in British boxing history, about rating the many top light heavyweights he fought during the division’s golden age.

Best overall: Matthew Saad Muhammad was the best opponent I ever fought.  His record speaks for itself and he had some of his best moments after our two fights. Matthew was a great all-rounder, he could punch, strategically he was sound and what a chin he had. The first fight was competitive but my best was behind me by the time we had the rematch. I only had one fight after that (a decision win over James Dixon in May 1980). 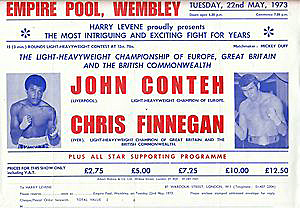 Best boxer: Chris Finnegan was a great boxer. He had the British and Commonwealth titles and I had the European when we met in 1973. It was funny because I took the European title from Rudiger Schmidtke, from Germany, who had beaten Chris for it. Schmidtke was technically very good but he suited my style and I stopped him whereas I always found Finnegan very difficult. Styles make fights I guess but Chris was technically brilliant and his background as a gold medalist in the 1968 Olympics proved that. He utilized all of that experience in the pros and used his southpaw stance to his advantage. We met again a year later and I stopped him on cuts. 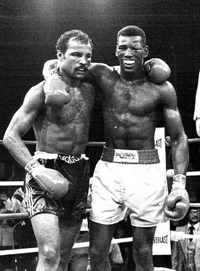 Best puncher: Matthew Saad Muhammad because he was the only fighter who ever stopped me. I can’t tell you how hard he punched because I didn’t really feel much (laughs). I’m not taking anything away from Saad but I was coming towards the end of my career in 1980. Jorge Victor Ahumada, who I won the title against, was another big puncher and he could also take a shot.

Best defense: There was a fighter I met on the way up called Eddie Duncan (September 1972). He was hard to hit but that was mostly down to inexperience on my part. It was only my 12th professional fight and I found him very awkward and cagey. He used his knowledge and although we didn’t get a return fight, it was an important learning curve for me. Mate Parlov was good defensively and although I thought I won that fight (Conteh lost by disputed split decision in June 1978) you can’t really complain. I was fighting away from home and I needed a knockout to get a draw over there (Belgrade, Serbia). Still, it must be said that Parlov was a brilliant boxer. He was also southpaw and another former Olympic gold medalist (Munich 1972). Yaqui Lopez was hard to hit and he reminded me a lot of Carlos Monzon but that was maybe down to the way he looked.

Fastest hands: You would have to go some to cause me trouble with fast hands because I was quick. I relied on speed and endurance and worked behind a good left jab. When I got tagged I responded as quickly as I could with fast hands. Saad Muhammad and Chris Finnegan were two of the faster guys I fought. Chris was very fast but he was also clever and, as I said, left handed. That made life awkward for me. Again, Schmidtke was quick but that suited me because I relied on my speed to beat his speed.

Fastest feet: John Conteh, straight to the pub after a fight (laughs). As soon as I got out that ring it would be down to Soho in the West End of London (laughs). No seriously, it’s an interesting question because I’ve never really thought about it. In a boxing match you’re more worried about an opponent’s hands but Ali had very fast feet and made that work for him. There was a fighter called Bunny Sterling, who was a British and European middleweight champion, and we did a lot of sparring together. We had the same trainer (the late George Francis) and Bunny brought me along nicely due to his speed and movement. He was a terrific fighter and his losses were mostly to the very top guys in the division. 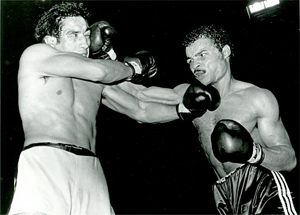 Best chin: Jorge Ahumada because I knew before the fight I wasn’t going to knock him out. He had pushed Bob Foster to a draw in Albuquerque four months earlier and Foster retired and left the title vacant. Jorge was incredible but there were other guys I faced on the way up who I couldn’t stop unless it was on cuts. Billy Aird, a heavyweight from Liverpool, had a great chin when we fought at the Royal Albert Hall in 1972.

Best jab: Again you would have to go some to beat my jab because I had developed that shot from childhood. Matthew Saad Muhammad had a great left hand and he used that to set up power punches. He preferred a scrap but he had the ability to stand up and throw straight shots. I was able to give him a good fight first time round but in the rematch I just wasn’t there. My lifestyle let me down and I wasn’t as hungry as I had been before. Finnegan had a great right jab from the southpaw stance but for the most part I would be able to counter an opponent’s jab with my own.

Strongest: Jorge Ahumada was extremely strong. The heavyweights I fought on the way up didn’t get a chance to use their strength because I was too fast for them and I could punch my weight and compete with them on that basis. Ahumada, Yaqui Lopez and Mate Parlov were amongst the strongest opponents I ever faced. I went 15 rounds with all three of them and incidentally I think that cutting back to twelve was good for the sport. When medical professionals make the decision to do that for a fighter’s safety that can only be a good thing. I was super fit in those days and I knew I could go the distance because it was just another human being I was in there with. If you’re 100 percent fit then you can always respond but you’re in trouble if you haven’t trained properly. If I’d done the work then I was like a Formula 1 car and the tank was never going to let me down. As my trainer always said, a fight is won and lost in the training ground. I never ran out of fuel.

Smartest: The tax man (laughs). He’s got more power than the police. I came at him with a pair of gloves and he said you’ll f____in’ need more than that (laughs hysterically). No I would say Mate Parlov and Chris Finnegan strictly because of their amateur back ground.  You can’t beat Olympic experience and they acquired their smarts before turning professional. Parlov and Finnegan used strategy and boxed smart. We’re not talking about Marciano or Tyson prototypes, but technically gifted boxers. 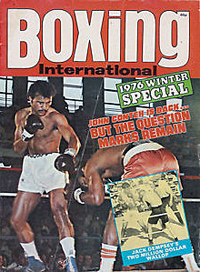 money and contracts were also a hindrance which contributed to him departing the game at the age of 29.

“There were a lot of problems regarding business,” said Conteh. “Those fights aren’t in the ring and, for the most part, you never win against the establishment. I would encourage young fighters today to learn from that but I still got out of the sport at the right time.

“I was finished in 1980 and didn’t have the hunger, fitness or desire to carry on. There was no fuel left in the tank and I couldn’t compete at the top level. With me it was all or nothing, so I called it a day.”

Despite the untimely end to his career there is no bitterness in Conteh and he sounds as happy as any person could be. The 62 year old has been tee total for over 20 years and contributes tirelessly to various UK charities.

Conteh is also a popular after dinner speaker, enjoys a round of golf and the man once dubbed by the British press as “JC Superstar” still retains a cut throat sense of humor and that famous twinkle.