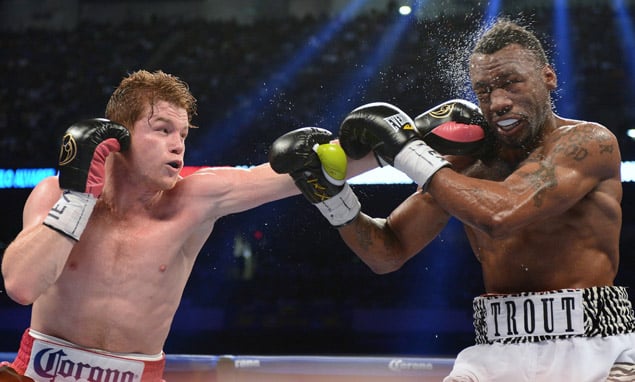 “Alvarez has committed himself to wanting to fight three times next year, and we locked in the dates, and we informed the pay per view industry accordingly,” Schaefer told RingTV.com after meeting with Alvarez in Los Angeles on Monday. “The first date he will be fighting on is March 8, and I’ll be locking in the venue in the next couple of days. The second date will be July 26 and the third date will be Nov. 22.

Schaefer met with Alvarez on Monday, targeting three potential locations for the fighter’s return in March.

“We are looking at three possible venues in no particular order. One of them is Las Vegas at the MGM Grand. Another one is San Antonio, and the other one is in Los Angeles,” said Schaefer. “We will be announcing within the next few weeks, obviously, the venue and the opponent for the first fight. We’re very excited about going forward with this.”

Alvarez lost by majority decision to Floyd Mayweather Jr. last month and was dethroned as RING and WBC titleholder after having unanimously decisioned previously unbeaten Austin Trout in April.

“What this shows you is that boxing and the career are a learning experience for Canelo,” Schaefer said of Alvarez’s loss to Mayweather. “He’s 23 years young, so this was a very valuable lesson. Who knows? Maybe down the road, there might be another fight between Mayweather and Canelo. But for right now, it’s about getting back and getting back quickly.

“Canelo made it clear that he’s not planning on taking any vacations. Next year, he wants to work. He’s excited about going back into the gym and he really can’t wait. He said, ‘the sooner, the better.’ So, I think that with this said, we have three great pay per view dates, and he’s committed and it will be up to us now to make sure to secure the right opponents to make these pay per view events as big as possible.”

In line with an earlier report by RingTV.com, Schaefer said that he planed to sit down with Cotto, although he declined to say how soon that meeting would take place.

Cotto lost consecutive unanimous decisions to Mayweather and Trout in May and December of last year before scoring a third-round knockout of Delvin Rodriguez on Oct. 5.

Cotto is “a free agent”, according to his legal advisor, Gaby Penagaricano, even as he aligned with Top Rank for his fight with Rodriguez after having lost to Mayweather and Trout under the banner of rival Golden Boy.

An Alvarez-Cotto bout would be huge given that Alvarez’s loss to Mayweather grossed a record $150 million, and Cotto is widely considered the most lucrative pay per view attraction in boxing behind Mayweather and Manny Pacquiao. Cotto is also Puerto Rican, which taps into boxing’s strong Mexico-Puerto Rico rivalry.

But Schaefer said he is prepared to match Alvarez against others if a Cotto fight does not come to fruition, such IBF titleholder Carlos Molina.

Molina was supposed to face former WBC 147-pound beltholder Victor Ortiz on a Dec. 14 card headlined by WBA beltholder Adrien Broner against Marcos Maidana before IBF President Daryl Peoples declined to grant Molina permission to make a defense against a boxer who is not rated by his organization.

Another possible bout for Alvarez could be the winner between Trout and Erislandy Lara, a fight slated for Dec. 7 at Barclays Center in Brooklyn.

Alvarez said that he will be on hand on Dec. 14 when his 31-year-old brother, junior welterweight Ricardo “Dinamita” Alvarez (22-2-3, 14 KOs), faces an opponent to be determined on the Adrien Broner-Marcos Maidana card at the Alamodome in San Antonio. Ricardo Alvarez will be after his 14th victory in his past 15 bouts and his 11h stoppage during that streak.
“I had my meeting today with Golden Boy Promotions, and we finalized that my pay per view dates will be March 8, July 26 and Nov. 22. I will announce my opponent in the weeks to come,” said Alvarez, through Golden Boy translator Ramiro Gonzalez.
“I want to say thanks to all of my loyal fans, and thanks to all of the people who have supported my career and my fights, and I’m expecting that 2014 will be great year for me to give everything back to my fans.”

RING 8 PICKS DANNY GARCIA AS FIGHTER OF THE YEAR 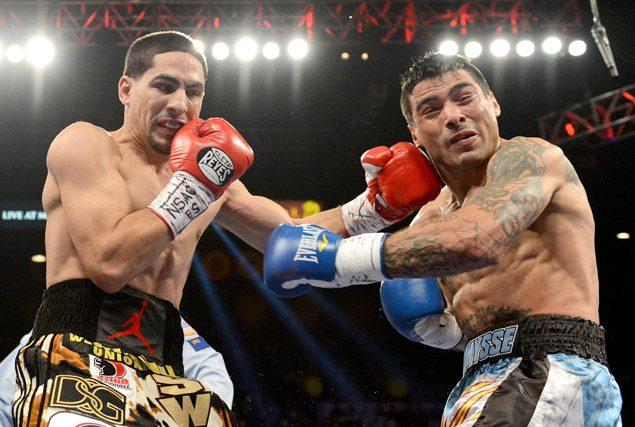 RING, WBA and WBC junior welterweight champion Danny Garcia, who is coming of last month’s unanimous decision over RING No. 1-ranked junior welterweight Lucas Matthysse, will be honored as Fighter of The Year by RING 8 on Dec. 8 during the organization’s 27th annual holiday awards ceremony at Russo’s On The Bay in Howard Beach, N.Y.

A 25-year-old Philadelphia resident who floored Matthysse in the 11th round, Garcia (27-0, 16 knockouts) has scored fourth-round knockouts over former titleholders Erik Morales and Amir Khan, split-decisions over Ashley Theophane and ex-beltholder Kendall Holt, and unanimous decisions over Morales and former titleholders Nate Campbell and Zab Judah.

Garcia and his father and trainer, Angel Garcia, say their options are comprised of either a defense of his belts or a non-title catchweight bout that would allow the boxer to gradually ascend into the 147-pound division.

CARL FROCH-GEORGE GROVES TO BE TELEVISED IN THE UNITED STATES

The Nov. 23 all-British super middleweight clash between titleholder Carl “The Cobra” Froch (31-2, 22 KOs) and George “Saint” Groves (19-0, 15 KOs) will be televised LIVE and exclusively in the United States by AWE and awetv.com, according to a release.

THE RING’s No. 1-rated 168-pounder who turned 36 in July, Froch is coming off May’s unanimous decision over Mikkel Kessler in a rematch of their 2010 bout when Kessler unanimously decisioned Froch as part of Showtime’s Super Six World Boxing Classic.

Since falling to RING super middleweight champion Andre Ward by unanimous decision in December of 2011 in their bout for THE RING, WBA and WBC belts, Froch has won three straight fights, two of them by knockout.

Froch had earned consecutive stoppage victories over Philadelphia’s Yusaf Mack in the third round and previously unbeaten IBF beltholder Lucian Bute in the fifth in May and November of 2012 prior to facing Kessler.

The AWE network is currently available nationally on Verizon FiOS TV channel 169 and 669 in HD, AT&T U-Verse TV channels 470 and 1470 in HD, along with over 100 cable systems across the country and worldwide. The new website for AWE is www.AWEtv.com.

Unbeaten light heavyweight Michael Seals, who has stopped 10 of his opponents in the first round, has signed with Banner Promotions, organization CEO Artie Pelullo announced on Monday.

A 31-year-old from Atlanta, Ga., Seals (16-0, 12 knockouts) scored perhaps his signature victory when he stopped former two-time super middleweight titleholder Byron Mitchell in 2:42 of the initial round in December of last year.

“I am excited to be a part of Banner Promotions. I know they can do a lot of big things and can take my career to the next level,” said of Seals, who began boxing at Atlanta’s Paul Murphy Boxing Club under “Sugar” Bert Wells after having attended Alabama A&M.

“Within the next year, I will be looking to be in the top 15, and will be fighting for the world title by 2015. Banner Promotions will provide me with the opportunity to introduce me to the world. I feel like I am the most talented light heavyweight, and I know the world will be excited to see that.”

Seals is coming off last month’s second-round knockout of Williams Johnson, his sixth straight stoppage win during a run that has included five first-round knockouts.

“We have been talking to Michael for a little bit, and we are very happy to have him in the fold,” said Pelullo. “He has great potential and we will give him the opportunity to showcase the skills that we believe can take him very far.”

A 6-foot-2 native of Mobile, Ala., Seals has degree in physical education from Alabama A&M, and is expected to have his next fight on Nov. 9 against Steve Walker in Norcross, Ga.

“The kid loves boxing and is such a gym rat that he sleeps in between his workouts at the gym,” said Keishan Davis, the Atlanta-based attorney who manages Seals.

“He has been told to slow down and he basically lives at the gym,” “We are very excited to be with Banner Promotions. They have shown they can get fighters to the highest level, and they will provide Michael that avenue.”