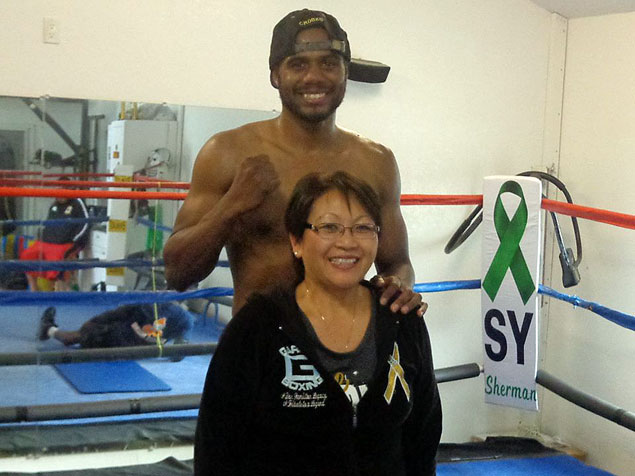 Kathy Garcia poses with middleweight prospect Paul Mendez in the ring of the Garcia Boxing gym that is attached to her home in Salinas, Calif., where all of her fighters live and train.

Throughout its long and checkered history, scandals involving managers and fighters have plagued professional boxing.

In the course of their partnerships, friction between the two has often led to lost trust, ending the alliance. Boxing legends Jack Dempsey, Rocky Marciano, Muhammad Ali,and Mike Tyson all encountered disruptive relationships with their managers. In some cases, unscrupulous managers squeezed every last penny out of their fighters before discarding them like yesterday’s garbage when the boxer was past his prime.

Enter Kathy Garcia, the antithesis of the stereotypical repugnant boxing manager. The contrast is obvious. No boxer managed by Garcia has been asked for anything until his paycheck reaches six figures. She tacks on no added expenses. 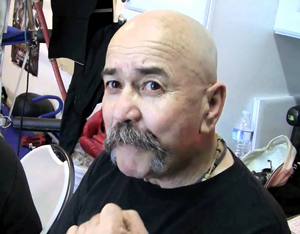 Garcia Boxing, which is run by Garcia, her husband Max, and her son Sam, handles every aspect of the fighter’s life, including training, publicity, nutrition, and living accommodations.

Garcia’s involvement in boxing began in 1996. Max Garcia, who at the time was working at the Salinas Boxing Club, told her about a 14-year-old named Jose Celaya. The boy was good, said Max, but living in Salinas made competing in any worthwhile amateur tournament difficult. Max and Jose had to travel to the competitions, and do that, they needed money.

“I’m a gung-ho fundraiser type of person,” said Kathy to this writerduring an interview at her home a few days ago. “I describe myself as a PTA mom. PTA moms can do anything. I’m a planner. I’ve worked as a paralegal all my life. Max is not. He trains, I plan. I began raising money for travel.”

Garcia, a tiny woman of high energy, grew very fond of Celaya, but seeing him fight in person bothered her.

“First I didn’t like it,” Garcia said. “But, Jose told me he wanted to do it. We treat all the kids like they’re our kids. I promise the parents that. Boxing is a very dangerous sport. That means training, conditioning and nutrition. If we think a kid is not ready to be in the ring, we’re not going to put him in. Max prides himself in how he trains the boys.”

Is there a secret to being a good boxing manger?

“That’s a hard question because I approach managing in a totally different way than all managers,” Garcia said. “I don’t approach it as a business. I approach it as me taking care of a young man who has a dream. And the only way they can fulfill that dream is to have someone who supports them, both by giving them aplace to live and train.

“This is the same approach Max has. It’s up to them. I’m going to provide them with enough equipment as possible to achieve their dream,” she added.

The “Team Mom,” as she calls herself, has a set of rules that apply to every fighter living with her with no exceptions.

“I couldn’t live under my rules,” she said, laughing. “When they come in my home I tell them that their job is to box. That’s all they’re going to do. Our job is to make them successful. I’ll provide the structure. I’ll tell them what to eat and when to go to bed. Max has a regimen. In the morning, you run. In the afternoon, depending on when your fight is, you train.

Temptations can be a distraction for any fighter. For Garcia, keeping the kids focused is simple.

“I can’t have a fighter on his phone all the time and staying up too late,” she said. “I can’t have that because now I can’t trust that you’re going to be safe in the ring. As soon as the fight is over, they can eat whatever they want for one week. It’s tough, but it’s all for them.”

The Garcias believe they aren’t just building a fighter, they’re molding a human being.

“There’s a very small window of opportunity for a boxer,” Garcia said. “Maybe one percent makes enough to never have to work again. So, whatever money you make, you better be wise with it and be ready to go into another career after boxing.

“We’re trying to get them to be disciplined, to know what they want to do after boxing. Paul (Mendez) is going to be one of those people. He already knows that his boxing is not about money. His goal is to be the best that he can be. After boxing he’s going to college.” 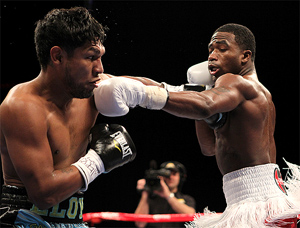 Celaya and Eloy Perez have been the most successful boxers groomed by the Garcias. Celaya was once the NABO welterweight champion and ranked number one by the WBO. In 2004, he was lured away by money, and was promptly knocked out in his next fight. Perez’s lapse in judgement cut much deeper. After being knocked out by Adrien Broner last year, Perez tested positive for cocaine.

“Jose’s dad wanted the money,” Garcia said. “It’s as simple as that. Eloy’s failings had nothing to do with boxing. When we got notice that Eloy had failed the drug test, my son Sam thought it was wrong. I knew it wasn’t. It made sense. Eloy was having meltdowns in training. He was fighting with Max, which was uncharacteristic of him. He had always done what we asked him to do.

“What’s disappointing for me is how embarrassed Max and Sam were. I can go to my other job. They can’t. They love what they do so much.”

A few months ago, Perez visited the Garcia house. He asked if they would consider handling him again. Kathy said she’d think about it.

She hasn’t seen Perez since.

“I have to trust the fighters,” she said “It’s all the emotion we put into our fighters. I love my fighters. When they don’t succeed it crushes us.”

As hard as the Garcias try to protect their clients, there’s only so much they can do. 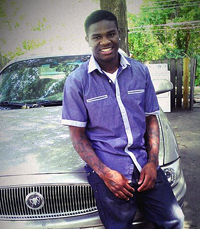 Preston Freeman looked special. He had all the tools of a natural fighter. He could box and punch. Freeman, who grew up in the St. Louis area, had been living and training with the Garcias’ for six months. He’d won his first three professional fights with ease. His future looked promising. In March, a few days before his next fight, Freeman told Garcia that he wanted to go home.

“I’m being brutally honest here,” she said. “The week before he died, I’d come out to the kitchen at night to get something to drink and Preston would be out here watching the movie Titanic. That was his favorite. He kept watching it every single night. I’d tell him he needed to get some sleep. Max tried to wake up Preston twice, and he didn’t get up. Max doesn’t ask a third time. That’s the way it is. Preston was mad about that.

“He told me soon after he wanted to go home,” said Kathy. “I could see he was really homesick. I told him he would hurt his career here in California if I pulled him out of the fight. I got him a ticket, but for the long way home. I wanted him to think about it. He died the next day. He was shot outside a nightclub in St. Louis.

“His mother had called me and begged me again to not let him come home. I told her he was really homesick and that I can’t put him in the ring like that. When I heard he was dead, can you imagine how I felt? Sam was sobbing,” she added, shaking her head slightly.

For now,the star of the Garcia stable is Paul Mendez, a 23-year-old middleweight from Delano, Calif. Mendez will be fighting for the fourth time on Monday, Oct. 28, on a Fox Sports 1-televised card in Redwood City, Calif. Four fights in one year is a lot nowadays. 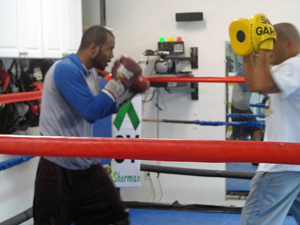 “Paul is mentally strong,” Garcia said. “Max always trains the fighters to double the rounds they’re fighting. We’ve been very fortunate to get those fights and I’m never going to turn down a fight with (local promoters) Don Chargin and Paco (Rafael Damian).”

Mendez has won seven bouts in a row since moving in with the Garcias last year.

“Everything has changed for the better since I came here,” Mendez said during a break from training. “I took a leap of faith. I had a pretty good life in Walnut Creek (Calif.), but I knew I had to make some changes. It’s not about money or titles. It’s about being the best that I can be.”

The Garcia home is modest, but comfortable. Just off the kitchen is the gym. Between the rat-tat of boxing gloves, some laughter fills the house. It’s hard work being a boxer. It takes time and sacrifice but the Garcias’ don’t mind.