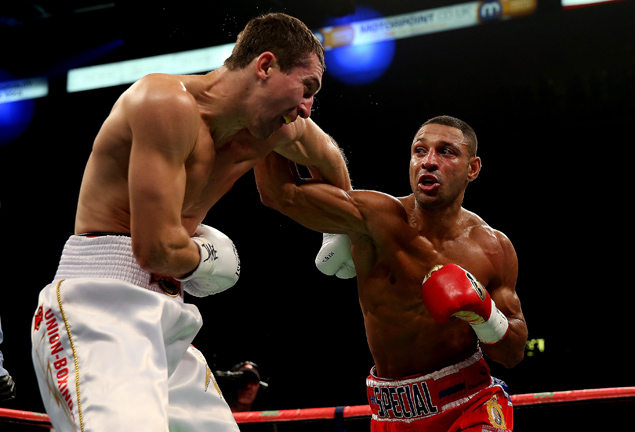 The nickname is “The Special One” and it was a special performance from unbeaten welterweight contender Kell Brook, who impressively dispatched former WBA titleholder Vyasheslav Senchenko in the fourth round of a scheduled twelve in Sheffield, England.

Brook, THE RING’s No. 4-rated welterweight, decked his man in Round 3 and remained within punching distance to finish impressively in the following session. The Ukrainian seemed to struggle whenever Brook landed flush and it was a single right hand that closed the show.

“I knew this guy was a game champion,” said Brook. “I had to be prepared and we did the business, nothing will stop me from getting that world title. I loved my home fans tonight. I’m back, injury free and ready to go.”

Both men started cautiously in Round 1, although it was noticeable that Brook (31-0, 21 knockouts) immediately claimed ring center. It was merely a battle of the jabs but the home fighter was quicker with the left and it snapped back the Ukrainian’s head more than once.

Senchenko (34-2, 23 KOs) got started in Round 2 and landed with a few quick lefts but there was no consistency to his work and Brook repeatedly beat him to the punch. Even at this stage the British star’s edge in hand speed looked ominous and Senchenko wore the look of a concerned man. 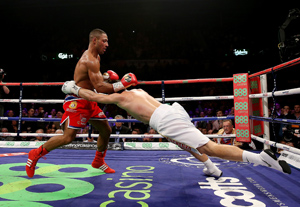 Brook exploded into action in Round 3 and, after landing two crushing rights, dropped his man with a quality one two. Senchenko rose unsteadily and “The Special One” picked his shots well for the remainder of the session and only the Ukrainian’s heart and willpower kept him alive.

The home fighter followed up his advantage in Round 4 and rocked Senchenko with a classy right uppercut, but there were alarm bells moments later when Brook shipped a flush right hand which momentarily took his equilibrium.

Senchenko attempted to seize the advantage but Brook recovered quickly to cross over the final right hand. The visitor rose once more, but when the referee asked Senchenko to step forward there was no response and he smartly waved off the contest.

In July, Kell Brook stopped American Carson Jones in the eighth round of a junior middleweight rematch but he is back at 147 pounds and the frustrating injuries, which put paid to a long awaited title shot against Devon Alexander, are now behind him.

This win over Senchenko allows the popular Brit to retain a mandatory position with the IBF and resume his pursuit of a showdown with the crafty American southpaw. Whether that fight comes to fruition remains to be seen but Matchroom Promotions are still in hot pursuit and remain eager to make the Alexander fight a reality.

“Kell, at the very least, will fight for the IBF title next,” said Brook’s promoter Eddie Hearn. “Other options? I confidently say that we would fight Amir Khan in a non-title bout and Adrien Broner is another big fight because that is a huge pay per view event in the UK.”

Brook has made a significant mark on the world scene by halting a respected former champion in Senchenko tonight and avenging Ricky Hatton’s body blow defeat will only help endear him to the British public.