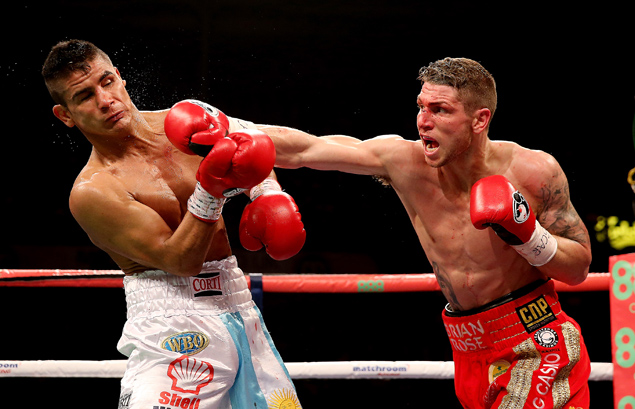 SHEFFIELD, England – Brian Rose, from Blackpool, England, played a cautious chess game against Javier Francisco Maciel and did enough to convince two of the three judges that he was the winner in a WBO junior middleweight title eliminator on the Kell Brook-Vyacheslav Senchenko undercard on Saturday.

In the early rounds Rose (25-1-1, 7 knockouts) kept his hands high and jabbed effectively at a relatively easy target. Maciel (27-3, 20 KOs) was crude by comparison and the Brit worked his defense well to thwart some labored assaults.

In the middle rounds Maciel bounced back to hurt his man with several ferocious uppercuts and he was making a real target of the body. Rose’s nose was bleeding profusely but he dug deep to smash the Argentinian with counters and went back to the jab once the storm had passed.

There were tense moments for the home crowd in the championship rounds as Maciel pursued the knockout but Rose always responded when hurt and controlled ring center.

Opinion on the winner was split at ringside, just like the decision, but Rose, 28 years old, will now challenge the winner of Demetrius Andrade and Vanes Martirosyan scheduled for Nov. 9 in Texas.

Olympic gold medal sensation Anthony Joshua battered Paul Butlin to defeat in the second round of a heavyweight attraction.  The official time was 0:50.

Joshua (2-0, 2 knockouts) came out of the blocks fast and worked behind a powerful left jab to set up his combinations. The left hook, right hand was working wonders for the big man from Watford, England, in Round 1 and Butlin was simply miles out of his league.

Another bodacious left hook, right hand registered a knockdown in Round 2 and a follow up charge from Joshua, punctuated by a big left hook to the body, had Butlin literally running for cover and the referee saved him from further punishment.

It’s early yet but the 24 year old, who weighed in at 232 pounds, looks to have bags of potential.

Smith, the youngest of four brothers who box professionally, was coming off six consecutive first round knockouts and is widely regarded as the most outstanding prospect in British boxing at the moment.

The twenty three year old looked sharp over the first five rounds, scoring well with sharp jabs and clusters of power shots to keep his man honest. Acosta, 168 pounds, wasn’t in the UK to lie down and did look dangerous with several earnest looking single shots.

Smith, 167 pounds, remained unfazed and took everything in his stride.

In the sixth the Liverpool star (9-0, 7 knockouts) took his attack downstairs and decked the thirty five year old visitor with a whipping left hook to the body. Acosta was badly hurt and although he managed to beat the count the fight was essentially over.

Smith followed up with solid shots to the head and another perfect liver shot ended the bout decisively.

Acosta, a forty fight veteran, challenged Robert Stieglitz for the WBO super middleweight title in 2009 and has mixed with solid opposition over the last few years.  Smith is still at the embryonic stages of his career and he responded brilliantly against his first significant test.

Unbeaten prospect Khalid (Kal) Yafai returned to action after a seven month layoff to claim a decision win over late replacement Santiago Bustos at featherweight.  The official score was 59-55.

The Birmingham star sparkled for the majority of the contest, landing accurately with a rapier left lead while mixing in effective work to head and body. Yafai, a former Beijing Olympian, was in workout mode and he will just be glad to have completed the six round distance.

Bustos did provide a last minute scare when he tagged Yafai with a big right hand in the final session but it was small solace when it came to the scorecards.

Yafai (8-0, 6 knockouts) sustained a very bad tear to his left bicep in the first round of a March bout against Michael Ramabeletsa and tonight was his long awaited return. Matchroom Promotions expect big things from the 24 year old, who would normally compete in the junior bantamweight classification.