Garcia looking to ‘build his way into 147’ 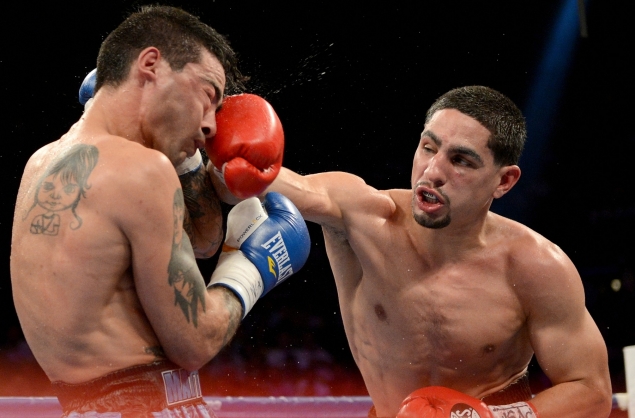 ATLANTIC CITY, N.J. — In the wake of September’s unanimous decision over RING No. 1-ranked junior welterweight Lucas Matthysse, whom he floored in the 11th round, Danny Garcia told reporters at the post-fight press conference that his next fight would be as a welterweight.

But in just over a month since defeating Matthysse, the 25-year-old RING, WBA and WBC champion, and his father and trainer, Angel Garcia, say their options are comprised of either a defense of his belts or a non-title catchweight bout that would allow Garcia (27-0, 16 knockouts) to gradually ascend into the 147-pound division.

“If my next fight is at 140, I’m going to defend my title. But if it’s at 147, I know that I’m not going to fight for a title right away,” Garcia said before Friday’s weigh-in at Caesars Hotel in advance of Bernard Hopkins’ IBF 175-pound title defense against Karo Murat. “But you never know. I earned the titles at 140, so it’s going to be hard for me to let them go. But I am getting bigger, so 147 is in the future. I’m just sitting back, relaxed and enjoying my time off.” 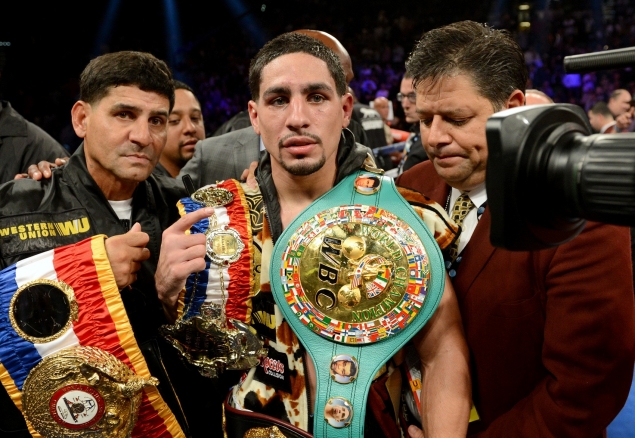 “You don’t just jump into the welterweight division. So it won’t be rigt at 147, it would be a catchweight, and a low catchweight. I’m not going to do that. A lot of fighters do win, and that does happen, but when they step it up with the real 147-pounnders, and the top 10 guys, then they can lose it all. I’m going to build him into a top welter. I’m not going to jump right into it.”

The remaining 140-pound beltholders are the IBF’s Lamont Peterson, who was stopped in the third round of a non-title bout by Matthysse in May, and the WBO’s Ruslan Provodnikov, who is promoted by Golden Boy rival Top Rank.

Provodnikov dethroned Mike Alvarado by 10th-round stoppage on Oct. 19 after having scored a 12th-round knockdown during a unanimous decision loss to WBO 147-pound titleholder Tim Bradley in March.

With Golden Boy and Top Rank feuding, and their companies aligned with rival networks Showtime and HBO, a matchup between Garcia and Provodnikov appears all the more unlikely.

“There’s a lot of people out there,” said Angel Garcia,whose son was an overwhelming 30-4 underdog to Matthysse according to  RingTV.com’s insiders. “Sometimes fighters don’t have to have the name. You might have a guy with no name that is a helluva fighter.”

Garcia’s options at at 147 pounds might eventually include a bout with RING No. 1-rated pound-for-pound fighter Floyd Mayweather Jr., who is also THE RING’S 147- and 154-pound champion. Garcia-Matthysse took place on theh undercard of Mayweather’s majority decision victory over Canelo Alvarez.

“Danny Garcia, at some point, has got to make believers out of us, So I don’t know if that is a possibility,” said Golden Boy CEO Richard Schaefer during the press conference following Mayweather-Alvarez, and, Garcia-Matthysse. “The good thing is that Floyd is going to be fighting next May, and we don’t really have to make that decision until sometime in January.”

“Like I’ve said. If I fight him, okay. If I don’t, oh well. It don’t matter, because I’m trying to build my own legacy the same way that he did, being a fighter of his own generation. My next fight definitely will not be a championship fight if I fight at 147,” he said.

“If [the Mayweather fight] happens, it happens. I would have a couple of fights to warm myself into the division. I’ve been having a lot of big fights lately, and I want to slow down, yet still give the fans what they want to see.”

The 147-pound division also boasts WBA beltholder Adrien “The Problem” Broner, a three-division titlewinner who is slated to face hard-hitting Marcos Maidana as part of a as part of a card called, “Danger Zone” Dec. 14.

“It doesn’t matter. Broner is going to fight Maidana. But like I told you, we’re going to build into 147. We’re not just going to jump into 147,” said Angel Garcia. “So right now, Danny’s got to show me that he can be a welter, and we’re going to do it the right way. Not just for money and fame, but for what benefits me and Danny for his career.”

Like his father, Garcia indicated that a fight with Broner is not in his immediate plans.

“He’s got a big fight with Maidana coming up, and I’m interested in watching that fight as a fan,” he said. “But as far as me and him, it’s just not about the fighters these days, it’s about management and the promotion and what they want. I’m not even looking into the future.”

Mayweather, Garcia and Broner are all advised by Al Haymon.

“Eventually, he’ll move up. When it’s right, he’s going to get all of that 147 money,” said Sam Watson, Haymon’s right hand man. “There is a lot of money out there for Danny Garcia. Danny and his dad, and when Al gets with them, they’ll make that decision. But they’re on the right path.”