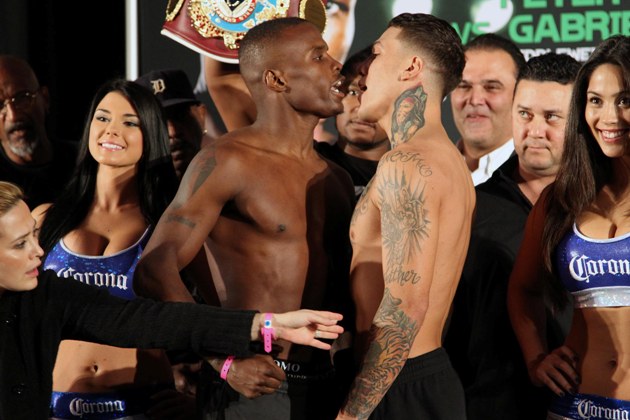 Referee Allen Huggins stops the fight 40 seconds into the 10th round on the advice of the ringside doctor Blair Bergen due to a cut over Rosado’s left eye.

Click here for Who wins Quillin-Rosado? Ask the experts

Referee Allen Huggins stops the fight on the advice of the ringside doctor Blair Bergen due to the cut over Rosado’s left eye. Quillin wins by 10th-round TKO.

Round 1: Rosado’s coming forward, Quillin’s working the jab. Most potent punch of the round is a left hook by Quillin that drives Rosado back into the ropes. Decent boxing by Quillin. Rosado’s trying to work in, unsuccesfully. Quillin firing the right with occasional success. Left and a right land for Quillin just prior to the bell. Quillin, 10-9.

Round 2: Rosado comes with an early right, but, and, later, a right-left combination. At Soft left to the body by Rosado and a grazing right. LEFT HOOK DROPS ROSADO, WHO RISES QUICKLY. The rest of the rest of the round is not very eventful. Quillin, 10-8, Quillin, 20-17.

Round 3: The knockdown represented Quillin’s 12th in his fourth straight fight. Quillin’s back to boxing behind a long jab. Nice right by Quillin. The fighters trade left jabs. Quillin’s trying to land the right hand behind the jab. Rosado’s short with his jabs and missing with rights. Two right hands to the body by Rosado and a left hook all land. Left hook by Quillin, as well as a left uppercut and a right hand. Quillin, 10-9; Quillin, 30-26.

Round 4: Left hook lands early for Quillin, but Rosado lands a left hook. Rosado weighed 175 on Saturday; Quillin, 170. Right hand by Quillin, who still is working behind the jab. Soliid left hook by Quillin. Triple-left hook by Quillin. Straight riight by Rosado snaps back Quillin’s head. A right-, left-right combination has QUILLIN WOBBLING AND HOLDING ON AT THE BELL. Rosado, 10-9; Quillin, 39-36.

Round 5: Solid right hand early by Rosado, who begins to taunt Quillin. Rosado has Quillin retreating and lands a wiilde right. Quillin chanses Quillin to the ropes with another combination. They trade left hooks. Rosado lands a soft right to the body. Jab by Quillin. Rosado, 10-9; Quillin, 48-46.

Round 7: Rosado’s pressure appears to be giving Quillin problems, as do a left-right combination and body attack along the ropes. Rosado continues to force retreat in Quillin, who fiires an uppercut and a right hand. Decent boxing by Quillin untiill taking a right. Three-punch. Rosado pressures Quillin to the ropes and out-lands him during an exchange. Quillin’s punches aren’t keeping Rosado off of him. Rosado, 10-9; Even, 66-66.

Round 10: Rosad’s left eye is cut. He takes an early right hand. Referee Allen Huggins stops the fight to have Rosado examined. HUGGINS STOPS THE FIGHT ON THE ADVICE OF RINGSIDE DOCTOR BLAIR BERGEN DUE TO THE CUT OVER ROSADO’S LEFT EYE. QUILLIN WINS BY 10TH-ROUND TECHNICAL KNOCKOUT!!!!