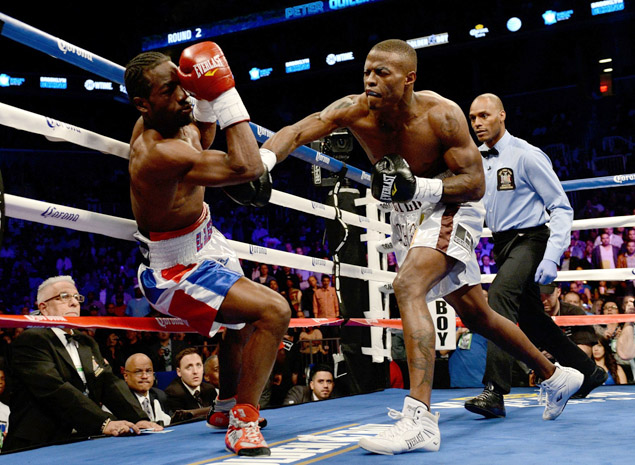 ATLANTIC CITY — Long before he entered the boxing ring at the age of 15 in Grand Rapids, Mich., Peter Quillin began leaping the hurdles of adulthood and learning how to be the man he is today. By the age of 7, Quillin was often left at home alone to care for two younger brothers, chasing away the bogeyman in a scary basement at night.

“When you grow up with roaches and rats, man, it’s not a lot of things that can get underneath of your skin. I understand life to a tee. I’ve been through everything. I grew up partly feeling like my mom didn’t love me in middle school. I grew up with so much pain that I learned to look into myself to get my glory,” said Quillin, who, nevertheless, professes unconditional love and forgiveness for his parents.

“I’ve seen my dad in and out of my life, not because he didn’t want to be there, but because he was in prison all of the time … To this day, nothing’s changed in me. I guarantee you that I’m very blessed to say nothing I’ve been through in my life has changed my heart. I still have a pure goodwill heart. I’m working on being a whole person every time that I step out there. I don’t have a hate my parents for making mistakes.”

A Chicago-born Brooklyn resident who has scored a combined 11 knockdowns over the course of his past three fights, the past two of which were at Barclays Center in Brooklyn, Quillin (29-0, 21 knockouts) will make the third defense of his belt against Philadelphia’s Gabriel Rosado (21-6, 13 KOs) on Showtime at Boardwalk Hall on Saturday night.

Quillin has been on a roll as of late, having dropped his man six times on his way to a unanimous decision over previously unbeaten Hassan N’Dam N’Jikam for the WBO belt last October, and scored four more knockdowns during a seventh-round stoppage of Fernando Guerrero in his first defense of that title in April.

After marrying his sweetheart, Alison, on June 15 — seven days prior to his 30th birthday — Quillin geared up for Rosado before having to endure yet another tragic challenge he revealed to a small gathering of reporters at Caesers’ Hotel on Thursday.

“My wife just had a miscarriage … For her, it was a part of her … At that time, she wanted me to come back home. I’m like, ‘babe, I’ve got a running camp right now’ … my sacrifice in this camp was being away from my wife while she was going through a tough time,” said Quillin.

“Reality says this: If I don’t go and fight and work on paying my bills, if I don’t have any money in the bank, then we don’t pay our bills. We’re in the street … The manly thing to do is make manly decisions for the family … Me being here, things are going to get better, later. I told my wife, ‘I have full belief in you that you’re going to overcome this struggle.'”

Trainer Eric Brown was there at the Wild Card Boxing Club in Hollywood, Calif., when Quillin received the news.

“We sat down and talked, and, basically, I had to tell him that was nature, that’s fate, and that’s something that wasn’t meant to be. I said, ‘it’s unfortunate,’ and ‘I know that you’re hurting behind it,'” said Brown. “The main thing I told him is that he had to be supportive to his wife, let her know that you’re there for her. It was very difficult for him to deal with, and the depression that she had to go through, but he dealt with it.”

Brown said things improved for the couple when Quillin arrived in New York earlier this week and was able to be with Alison.

“My dad’s at mostly every fight, and he comes to my camps. He was with my wife this whole time. It’s easy for my dad,” said Quillin, who then mimics his Cuban father’s accent.

“He’s like, ‘son, I tell you don’t worry about nothing. The lady must learn that she got to take it easy. You got a fight. I like a for you to clear everything out of your head.’ I think about my dad saying that all the time. It’s a blessing to have a family that puts so much passion into their kids, and that’s why I give him nothing but respect.”