Wilder has Steward in mind going into Firtha bout 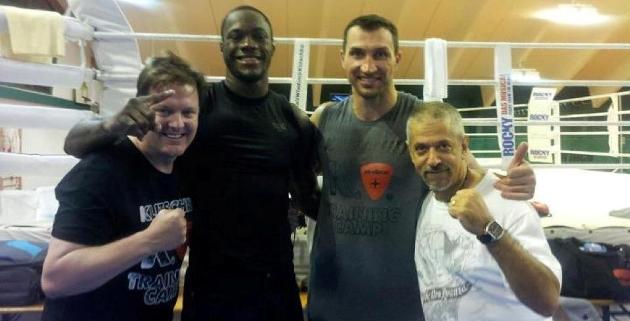 ATLANTIC CITY, N.J. — Knockout specialist Deontay “The Bronze Bomber” Wilder enters Saturday night’s heavyweight clash with Nicolai Firtha at Boardwalk Hall on Showtime inspired by his 8-year-old daughter, Naieya, who was born with the congenital disorder spina bifida, the prophecy and legacy of the late Hall of Fame trainer Emanuel Steward, as well as the news that WBC beltholder Vitali Klitschko has announced his presidential candidacy in Ukraine, and, likely retirement from boxing.

Before his death at the age of 68 exactly a year ago to the day on Friday, Steward had called the 6-foot-7 Wilder (29-0, 29 knockouts) “No. 1…among the American heavyweights,” as well as “the best heavyweight prospect for winning the heavyweight title.”

“That meant a lot to me, because being a legendary trainer like him, and to see the champions, now, that he’s had over the years, and to know that what he saw within the Klitschkos, he saw that same vision in them as he sees in me as a younger fighter. So that means a lot,” said Wilder, surrounded by a small group of reporters during a roundtable discussion on Thursday at Caesars Hotel.

“So it’s almost as if I’ve got to keep that going. I’ve got to prove to everybody that he was right all along. I have to prove it for those who have been believing in me, there are so many people depending on it. But there are also those who don’t believe in me, and I’m also the type of person that I love to prove people wrong. So when I do hold that belt up, my phrase is going to be, ‘I don’t want to have to tell you I told you so, but I told you so.’ I want to keep his memory alive.”

A 2008 Olympic bronze medalist who turned 28 on Tuesday, Wilder thought often of the then-ailing Steward when he celebrated his 27th birthday last year in Austria while spending time as the primary sparring partner for RING, IBF, WBA and WBO champion Wladimir Klitschko, who had been trained by Steward.

“I really didn’t have the opportunity to sit down and talk to Emanuel at length, one-on-one, but I always thought of what he has said,” said Wilder, who worked with Klitschko in advance of his unanimous-decision victory over Mariusz Wach last November.

“He would tell me that ‘definitely, you’re the best American heavyweight,’ and stuff like that. Just like you’ve heard, he said that even when people see that I will step up, and I’m in the fights that people want to see, that I’ll still do the same as I’ve been doing, and that’s knocking them out and beating them.”

A resident of Tuscaloosa, Ala., who starred as a high-school wide receiver and defensive end in football and at power forward in basketball, Wilder longed to be an athlete at the University of Alabama.

But Wilder said the early responsibilities of fatherhood, in part, derailed those plans.

“After high school, I wanted to go to the university, but I didn’t do so well on my SATs, so I had to go to a community college. I made the team at the community college for basketball. I had to make a decision, which wasn’t a big decision for me, because I already knew what I had to do. I had a little girl who was about to be born, and she was born with spina bifida. So I had a best friend in college, and I told him that I should start boxing. I thought that it was a great idea, because, in the streets, I always got into fights,” said Wilder, a married father of three.

“I tell people that I never looked for trouble. I was a quiet kid. But trouble always found me…I walked into the gym, and I fell in love with it. I fell in love with it, instantly. I came into it at the age of 20, but I was three days shy of my 21st birthday. I had always dreamed of playing with the Crimson Tide, just being in the city, but that didn’t happen. You may have one way that you think you’re going to go, but God may have another plan for you. I really feel as though God had a plan for me in this sport. I made the Olympic team in a year and a half, and earned a medal. Most time it takes a lifetime for someone to do that…I really believe that he has big plans for me.”

Depending on what happens with Klitschko, and how well he performs against Firtha (21-10-1, 8 KOs), Wilder’s plans may include a title opportunity relatively soon.

Wilder is ranked No. 3 in the WBC’s ratings behind mandatory challenger Bermane Stiverne and Chris Arreola, the latter of whom lost by unanimous decision to Stiverne in April before stopping Seth Mitchell in the first round last month.

“Deontay’s ranked right there, and I’m absolutely very interested in that fight,” said Golden Boy CEO Richard Schaefer. “As a matter of fact, I have already had discussions with the WBC about this fight. But first things first. Deontay’s got to win on Saturday night, and then I’ll have some followup conversations with WBC, and we’ll take it from there.”

Wilder would like nothing better than to fight for the belt against Stiverne.

“Hopefully, I could get whoever is there as his mandatory, that No. 1 spot. If that’s Bermane Stiverne, then I would love the fight. I think that’s an easy fight as well,” said Wilder. “I would love to fight for the title. There is not even a question in my mind that I would like that fight. Most definitely. I would have liked to have gotten that spot before [Vitali Klitschko] retired.”

Note: Next to the 14-time NCAA champion University of Alabama football team, Wilder is among the most popular entities in Tuscaloosa. Wilder maintains a close relationship with Crimson Tide coach Nick Saban.
“I spoke to their team in 2009. [Nick Saban] asked me to do that. I used to go to all of his Nick Noon luncheons, so Nick is a great guy, man. Nick talks about me. His wife talks highly about me,” said Wilder.

“He looks at me and he sees the work ethic that I have as far as the hard work, and that’s why I like him so much. He’s a strict coach. Even when they won the National Championship, he’s always had the same expression. Maybe inside, he’s joyful, but on the outside, you can never tell. The reason I like him is that he’s a hard worker and he wants the best.”