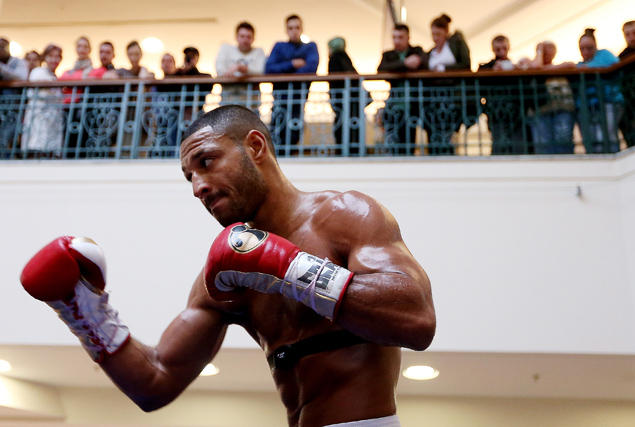 Welterweight contender Kell Brook works out at Meadowhall shopping centre ahead of his bout with former WBA titleholder Vyacheslav Senchenko on Saturday in Sheffield, England.

Senchenko broke British hearts last November, when he halted Hatton with a bursting left hook to the body in Round 9 and Brook, THE RING’s No. 4-rated welterweight, has been drafted in by Matchroom Promotions to provide retribution.

The Sheffield star did look impressive last time out when he stopped American Carson Jones in the eighth round of a July rematch and is desperate for a long overdue world title fight, but the Senchenko test is far from a formality.

The 36-year-old Ukrainian is a solid pro and in 35 paid outings has only lost once, to THE RING’s No. 9-rated Paulie Malignaggi by technical stoppage, so Brook must excel in order to keep world title aspirations afloat and reach his apparent potential.

This bout is in fact an eliminator to challenge IBF champion Devon Alexander who has been scheduled to face Brook on three separate occasions, only for injuries (twice to Brook) to cause untimely and frustrating postponements.

Ring TV.com spoke to Brook about the rematch with Jones, the upcoming engagement with Senchenko and what could lie ahead should he prevail.

RingTV.com: After nine months off you returned to the ring and stopped your toughest opponent to date, Carson Jones. How did you analyze your performance? 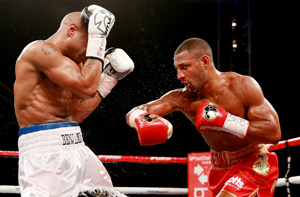 Kell Brook: I thought it was a C+ performance. I think Jones is a bogeyman for me and that was evident in the first fight. In the rematch I hurt him early and decided not to jump on him and I’m kicking myself a bit for that. I could have got him out of there earlier and looked sensational doing it. I let him off the hook and he came back but that gave me time to do my thing. I was on the ropes near the beginning, came out to center ring in the second half and when I hurt him again, that was all she wrote. Still, I got the rounds under my belt and that was important.

RTV: What worked in the rematch against Jones in terms of strategy?

KB: I controlled him with a nice jab and the right hook was a key shot. I was able to set things up off the jab but the right hook around the guard was working very well and it broke him down.

RTV: Next up is former WBA titleholder, Vyacheslav Senchenko. What do you know about him and what problems is he likely to present?

KB: I haven’t seen much of Senchenko but he’s a former world champion and he’s used to winning. He’s only lost once on cuts to Malignaggi, and he stopped Hatton. He showed his ambition by coming to a packed out arena in Manchester and knocked out the home fighter, when he was an underdog. Only Manny Pacquiao and Floyd Mayweather had stopped Ricky, so you have to give Senchenko full credit for doing that. I know that he’s coming over here to win and he will give it his all.

RTV: What were your thoughts on the Hatton-Senchenko fight? Were you surprised at the result?

KB: I only knew that Senchenko was a former world champion and because Ricky was coming back I was interested in seeing it. As I understand it Senchenko had a very good amateur career and that night in Manchester he did everything properly. I think he’s an extremely good fighter, who is tough and durable and comes to win. His record shows that.

RTV: Senchenko, as you said, has only lost one fight to Malignaggi. He looks very strong at welterweight; do you think you can stop him?

KB: I think I have the power to stop whoever I face at welterweight. I have the power and I’m naturally big for the weight class. I hit hard and if I land correctly then I will knock you over. I believe that I will stop Senchenko and I’ve trained hard to make sure I secure a stoppage. I never look to go the distance, so I’ll be breaking him down with a view to finishing the fight.

RTV: Should you be successful against Senchenko what is the plan going forward?

KB: The plan is for massive fights. From what I’ve been told the possibilities are very interesting but I must get past Senchenko first.

RTV: Are you looking forward to being back in front of a Sheffield crowd?

KB: The Sheffield fans are really passionate about their boxing and I can’t wait to be back in front of my home support. The fight will also be on Sky Sports and there are thousands of people around Britain who are interested in seeing me fight. Oct. 26 will be a great night of boxing and it’ll be packed out.

RTV: Who impresses you at welterweight?

KB: (Keith) Thurman is a very good kid. I’ve had an eye on him in his last few fights and that is a mouth-watering match-up between him and I down the line. Welterweight is bursting with talent like (Adrien) Broner, Alexander, (Amir) Khan, (Tim) Bradley and (Robert) Guerrero. Then you have legends like Mayweather, Pacquiao and Juan Manuel Marquez still in the mix. I’m very happy to be in this division and at 30-0 I am just desperate to be involved in a huge event. I want people to see me in a mega fight and prove that this is where I belong.