Diaz rust-free in win over Santiago 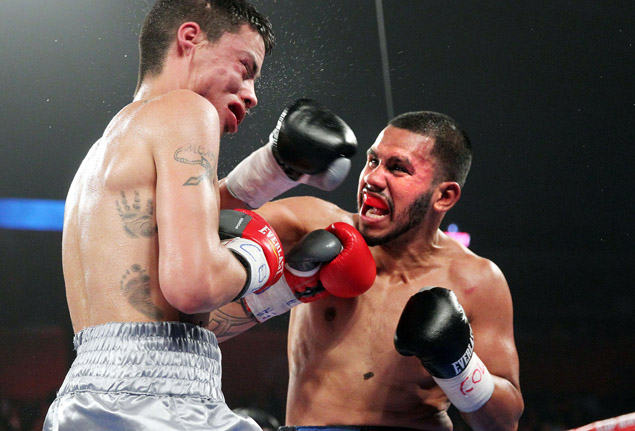 BROOMFIELD, Colo. – Former unified lightweight champion Juan Diaz has fully shaken off the rust from a two-and-a-half year layoff that came to an end earlier this year.

In the third fight of his comeback in the co-feature to Mike Alvarado-Ruslan Provodnikov on Saturday night, Diaz met unheralded Juan Santiago (14-11-1, 8 KOs) of Del Norte, Colo., in a ten-round bout that took place at 136 pounds, just one pound north of where he achieved his greatest success, and came away with a clear unanimous-decision win.

From the opening bell, Diaz jumped on the much taller Santiago, utilizing the pressure style that made him a fan-friendly fighter during the peak of his powers.

Diaz (38-4, 19 KOs) got touched a bit as he went after his overmatched opponent, but never deviated from his offense-minded gameplan for a second.

The prized Houston native Diaz was at his best when he worked on the inside, utilizing good head movement to avoid his opponent’s punches before landing combinations of his own. Santiago had mild success from the outside, but Diaz never allowed him to be stationed out there for too long.

The fight served as a nice appetizer to the evening’s main course between Alvarado and Provodnikov with Diaz and Santiago exchanging punches at a rapid-fire pace. Diaz will always face criticism for his lack of punching power, but he more than makes up for it in will and determination to go along with his relentless pressure.

By the fifth round, Diaz had everything working. His relentless body attack set up some beautiful hooks upstairs and his head movement allowed him to counter with two- and three-punch combinations.

Santiago took unnecessary punishment as the fight wore on and his hope for winning disintegrated. At one point in the sixth, Diaz knocked Santiago’s mouthpiece out a second time, with the delay allowing Santiago to make it to the bell.

Santiago showed an extreme amount of gameness in absorbing punishment, almost as though each punch he took gave him more adrenaline. This was made further evident when he shot a fist in the air at the end of the eighth, almost a self-congratulatory celebration for remaining on his feet.

In the ninth round, Santiago lost his mouthpiece a third time and refused to go back to the corner, picking it up and putting it back in his own mouth without it being cleaned. This was Santiago’s best round as Diaz seemed to be running on empty. Santiago made it to the final bell, earning the respect of a near-capacity crowd in attendance. Diaz won by scores of 100-90, 99-91 and 97-93.

The bout was the first of a six fight, 18-month deal that Diaz, who turned 30 years old a few weeks ago, signed with Top Rank earlier this month. He decided to partner with Top Rank rather than former promoter Golden Boy Promotions, feeling that Top Rank had his best interests more in mind.

Diaz is targeting a title at 135 pounds before eventually planning to move into the 140-pound division, where there are a number of lucrative fights that can be made underneath the Top Rank umbrella.

Brazilian lightweight Vitor Jones de Olivera (1-0) showed both his recklessness and fierce body punching in taking out Denver’s Martin Quezada (2-8, 2 KOs) in the second round. Olivera, the 20-year-old nephew of former two-division champion Acelino Freitas, put Quezada on the canvas three times via body shots before the bout was halted at 2:01 of the frame. Olivera made his professional debut last July in a first-round knockout, but the result was overturned to a no-decision after he tested positive for a banned substance.

A six-round welterweight bout between Daniel Calzada (9-9-2, 2 KOs) of Dona Ana, N.M., and Longmont, Colorado’s Carlos Marquez (4-2, 1 KO) entertained the crowd with Calzada earning the majority decision. The two traded punches liberally and had the crowd in a frenzy at the final bell as they went blow for blow with no care of defense. Neither guy possessed much power but still wowed the crowd as they landed flush with regularity. One judge had it a draw at 57-57, which was overruled by scores of 59-55 and 58-56 in favor of Calzada.

Local Denver junior lightweight David Escamilla (3-0, 1 KO) kept his perfect record intact, scoring a four-round unanimous decision over Jair Quintero (2-1, 1 KO) of Mexico in an entertaining bout. A left hook to the midsection put Quintero on the canvas in the second round, allowing Escamilla to prevail by scores of 39-36 thrice.

Puerto Rican bantamweight Starling Cordero (7-0, 4 KOs) made quick work of Mexico’s Abraham Rubio (3-2-1, 1 KO), forcing a stoppage at 1:39 of the opening round by referee Stephan Blea. Cordero is the younger half-brother of junior welterweight Thomas Dulorme. It was Cordero’s stateside debut, having fought all previous bouts in Puerto Rico.