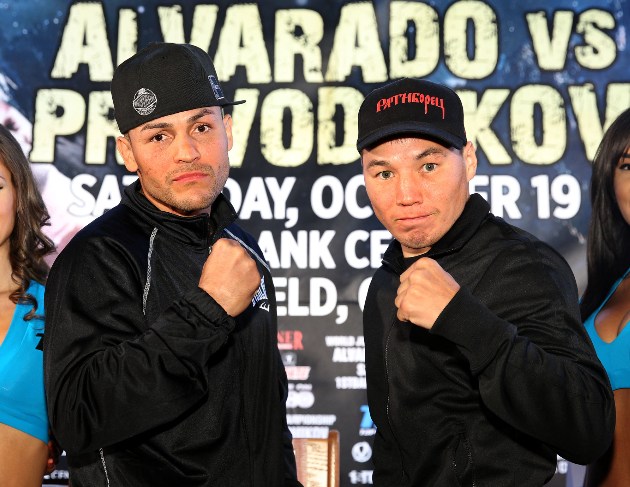 Although junior welterweight rival Ruslan Provodnikov will be a long way from his native Russia on Saturday night when he challenges WBO beltholder Mike Alvarado just outside Denver, “The Siberian Rocky” shared during Thursday’s final press conference that he is feeling right at home.

According to his manager, Vadim Kornilov, Provodnikov (22-2, 15 KOs) expects to be cheered by some 80 fellow Russians, including his mother, Raisa Provodnikova, when he faces Alvarado (34-1, 23 KOs), who will be fighting about five miles from his hometown.

Confident that he can force Alvarado into “a street fight,” Provodnikov presented Alvarado with a “Team Provodnikov” jersey during the press conference.

“It only makes me happy,” said Provodnikov. “I’m glad that there are all of these people here to support me, especially people like my mother being here. That means a lot to me.

“Actually, I realize that Denver is very similar to Russia. The climate, the weather and the scenery are very similar, so I actually feel as though I’m home.”

In his last fight, Provodnikov scored a 12th-round knockdown during a unanimous-decision loss to Tim Bradley, who successfully defended the WBO welterweight belt he won by split decision over Manny Pacquiao in 2012.

Alvarado, meanwhile, was last in the ring in March, out-boxing Brandon Rios to win the rematch of a seventh-round TKO loss from October of last year.

Provodnikov has dropped back to 140 to battle Alvarado after debuting against Bradley at 147, and will do so without the services of trainer Freddie Roach.

Roach is currently in the Philippines, where he is training Pacquiao for next month’s fight with Rios in Macau.

“I know that there has been a lot of talk about this fight,” said Kornikov. “Most of the news has been talking about Timothy Bradley, preparing for Mike Alvarado, asking about the weight, talking about Freddie not being here.

“But this is one of those fights where there is no marketing needed. There’s nothing that needs to be done. We all know what kind of fight this is going to be, and I think that the tickets are sold out for a good reason.”

“In a few weeks, maybe four weeks after that, we have Brandon Rios against Manny Pacquiao. We’ll decide then, based on the results of these fights, who will be the attractions to fight each other next year. That’s the way that it should be. So let’s see what happens. This is a great, great time for boxing.” 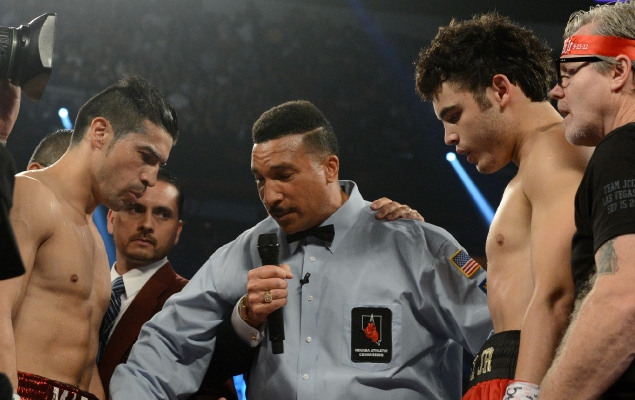 Veteran referee Tony Weeks will work his 22nd fight of 2013 when he officiates Alvarado-Provodnikov, whose judges will be Denny Nelson, Robert Hoyle and Levi Martinez.

Weeks worked Alvarado’s victory over Rios, and was last in the ring on the Bradley-Marquez card, stepping in to halt the bout as light heavyweight “Irish” Sean Monaghan stopped Anthony Caputo Smith with a barrage of blows in the third round.

“It’s been a great year for boxing overall, starting off with the Peterson fight. That was my first fight back East, and I’m from New York,” said Weeks. “This is my first boxing match in Denver. I’m most definitely looking forward to it. This fight on Saturday definitely has Fight of the Year potential.”

In May of 2012, Weeks officiated Floyd Mayweather Jr.’s unanimous decision over then-WBA junior middleweight beltholder Miguel Cotto. Weeks was also the third man in the ring for Pacquiao’s majority decision victory over Marquez in their third fight in November of 2011.

Another big fight on Weeks’ resume was the Diego Corrales–Jose Luis Castillo 2005 Fight of The Year, which ended with a 10th-round stoppage win by Corrales. 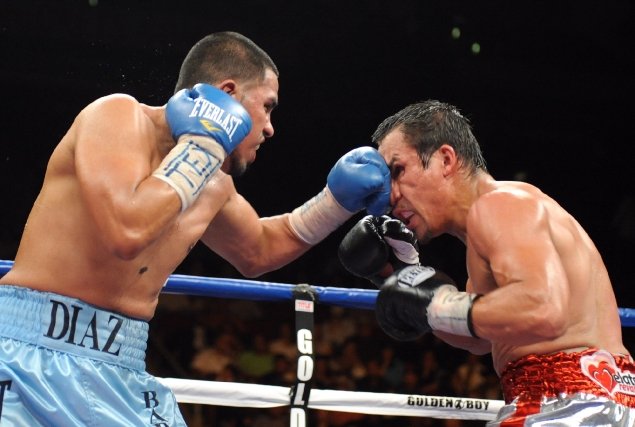 Also on the Alvarado-Provodnikov card is Vitor Jones de Olivera, the nephew of former titleholder Acelino Freitas. Olivera has a four-rounder against Martin Quezada.

Diaz was WBA beltholder when he stopped then-WBO counterpart Freitas in the eighth round in 2007. Fighting on the Diaz-Freitas undercard was Provodnikov in his third professional bout, a first-round stoppage of Antwon Barrett.