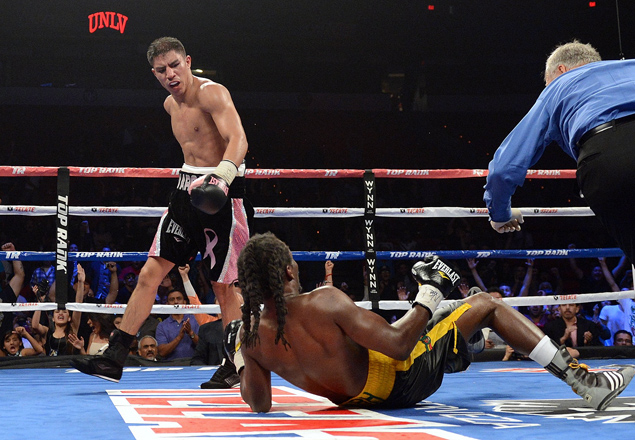 On the eve of tonight’s highly anticipated welterweight showdown between Timothy Bradley and Juan Manuel Marquez, a free show was held at the same venue that fight will take place at Thomas & Mack Center in Las Vegas.

Earning a stay busy victory in the night’s main event was welterweight Jessie Vargas, who won a hard fought ten round unanimous decision over Ray Narh.

Vargas (23-0) was the standby guy for Saturday. Should anything have happened in the months leading up to Bradley-Marquez, Vargas would have been the fill-in opponent. Since that fight cleared all the negotiation hurdles, Vargas had to settle for a tune-up fight as he looks forward to bigger things.

Vargas controlled the fight with Narh (26-4), who was coming off a stoppage loss to Ray Robinson. Vargas hadn’t fought since winning his HBO debut over Wale Omotoso back in March and was itching to get back in the ring.

The Las Vegas resident showed fluidity in his punches and strung them together nicely, though he was often left open for Narh’s incoming attack. Often criticized for his lack of punching power, Vargas was able to put Narh on the canvas in the final round on the way to winning a unanimous decision. Scores read 98-91 twice and 97-92. 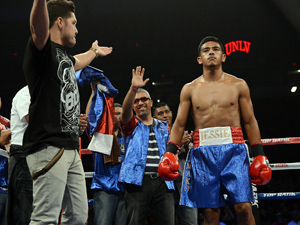 Promising Las Vegas junior featherweight prospect Jessie Magdaleno (17-0) had no problem with journeyman Raul Hidalgo (19-10), flooring him three times before ultimately stopping him in the third round.

Magdaleno was working with the esteemed trainer Joel Diaz, who also trains Bradley.

His offense featured lots of pressure, but Magdaleno was less reckless in his attack than in previous fights.

The younger brother to former 130-pound title challenger Diego, Magdaleno seems ready to step it up as he’s having no problems with this level of opponent.