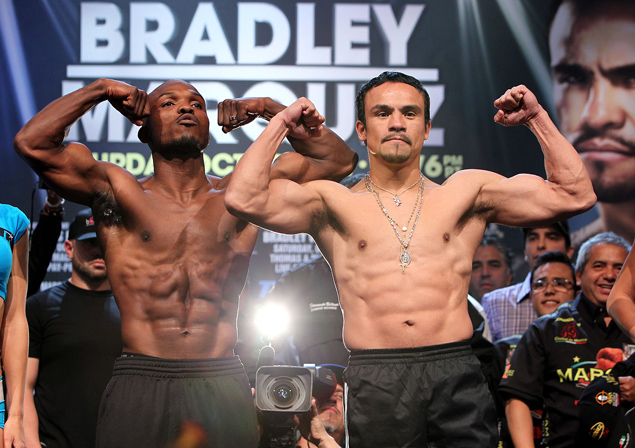 LAS VEGAS — Tim Bradley weighed in at a ripped-and-ready looking 146 pounds for his Saturday WBO welterweight title defense against Juan Manuel Marquez on Friday at the Encore Theater inside the Wynn Resort and Casino. Marquez weighed in at lean and muscular 144.5 pounds.

Their fight will be the main event of a HBO Pay Per View show from Thomas & Mack Center.

Marquez, who is coming off a sensational one-punch KO of his arch rival Manny Pacquiao, had the larger and louder group of fans at the weigh-in. 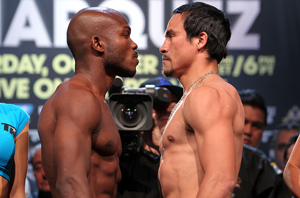 “Thanks to the beautiful public for their support and dedication,” Marquez told HBO’s Max Kellerman after weighing in. “I prepared very well for this fight. I sparred with three different styles, so I’m prepared for anything (Bradley) does.”

Bradley was booed by Marquez fans, but seemed to enjoy it.

“Give me more! Give me more! Doubt me. I love it,” said Bradley, who bounced back from his controversial decision over Pacquiao by waging a Fight-of-the-Year candidate war with Ruslan Provodnikov in March.

“This is nothing compared to (the Manny Pacquiao backlash). It got me prepared for this moment. I’m out here to entertain the crowd, so if I have the opportunity to knock this guy out, I’m definitely going for it.”

Orlando Salido and Orlando Cruz both made weight for their vacant WBO featherweight title bout, which is the main support to Bradley-Marquez. Salido, a former three-time beltholder coming off a technical decision loss to Mikey Garcia in January, weighed in at 126 pounds, the division limit.

Cruz, who has received much fanfare for being the first openly gay active pro boxer, weighed in at 125 pounds. He was flanked by his Puerto Rican Olympic teammate Miguel Cotto at the weigh-in.

Two-time Olympic champ Vasyl Lomachenko weighed 125 pounds for his pro debut against Jose Ramirez, a seasoned pro with a 25-3 record, in a scheduled 10-round bout. Ramirez, who, like Lomachenko, is 25 years old, weighed in half a pound over the featherweight limit on his first attempt. He later weighed in at 125.6 pounds.

Lomachenko-Ramirez will be a part of the HBO Pay Per View broadcast.