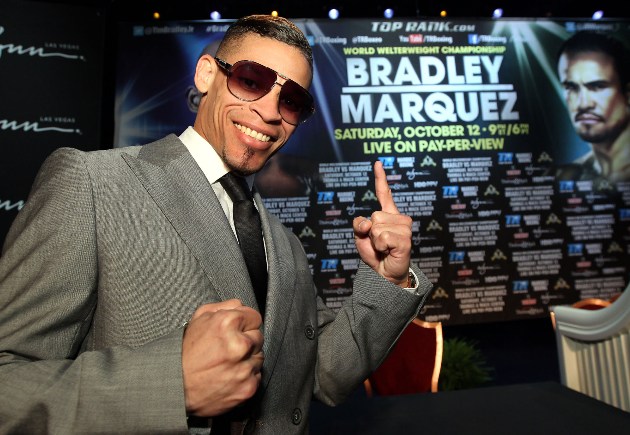 A 32-year-old who represented his country in the 2000 Olympics, Cruz declared himself to be “a proud gay man” last October and later announced his engagement to his partner, Jose Manuel.

“This is my moment. This is my time,” said Cruz (20-2-1, 10 knockout), during the interview on ABC. “I’m in a sport that is very macho. Sometime in the ring, people would should gay slurs at me before I came out. After the fights, I would cry with my mom.”

Cruz will wear a rainbow-colored uniform in support of the lesbian, gay, bisexual and transgender (LBGT) community’s social movement, as well as pink gloves in support of Breast Cancer Awareness Month when he enters the ring against Salido (39-12-2, 27 KOs) for their HBO Pay Per View-televised matchup.

Cruz also stated that he is honoring the late Emile Griffith, a former welterweight and middleweight champion who died in July and whose own sexuality had come to represent a major part of his legacy.

Marquez will pocket a guaranteed $4 million compared to $4.1 million for Bradley Another $2 million of Marquez’s purse will come from sources such as Mexican television rights. A former two-time titleholder, Salido will earn $100,000 compared to $65,000 for Cruz, according to figures provided by Keith Kizer, executive director of the Nevada State Atletic Commission.

Also, Ukrainian Vasyl Lomachenko, a winner of his second Olympic gold medal at the 2012 Games in London, will earn $100,000 compared to $25,000 for hard-hitting Mexican rival Jose Luis Ramirez. In a light heavyweight bout, “Irish” Seanie Monaghan will earn $60,000 compared to $20, 000 for opponent Anthony Caputo Smith. 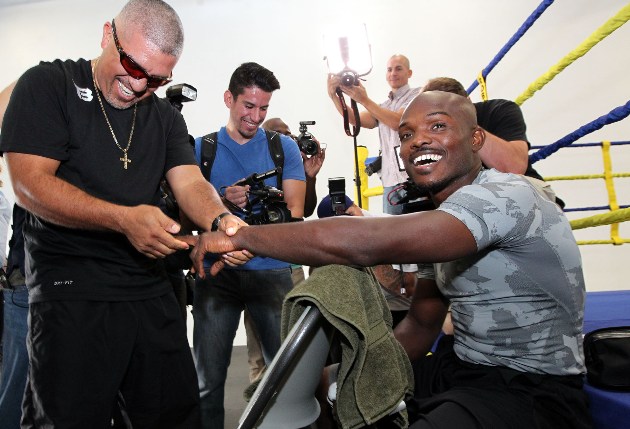 A 30-year-old from Palm Springs, Calif., Bradley had to rise from a 12th-round knockdown in March to secure a unanimous decision over Ruslan Provodnikov in defense of the belt he won from Manny Pacquiao by split-decision in June. Marquez was last in the ring for a sixth-round stoppage of Pacquiao, against whom he had gone, 0-2-1, in previous meetings.

On Saturday night, Bradley’s trainer, Joel Diaz, said that his man will have all the answers against Marquez, who turned 40 in August.

Although Bradley absorbed plenty of punishment against Provodnikov, who was making his 147-pound debut after having mostly fought at 140, Diaz dismissed the notion that he will be more susceptible to being stopped by Marquez.

“I can’t remember Marquez ever fighting 147 and actually making 147. He’s always in the 145s, 144s, somewhere in there. So If we stick to the plan, we can box Marquez all night. We can box him. We can keep him going. But if there is that trademark punch, that straight right, and he hits Tim and he doesn’t hurt Tim, and he sees that he doesn’t have the power to hurt Tim, then things are going to change. I’ll tell you that.”

In addition, Diaz said he would have little trouble allowing Bradley to fight toe-to-toe with the aging Marquez under the proper circumstances and after having employed the appropriate strategy.

“Once you’re in a fight, and I think the adrenalin starts pumping up, then once Timothy feels the confidence that he’s in control, then, of course, he’s going to stand there and exchange with Marquez. Most of all, we have to work up and down. Tim is going to work his body and he’s going to work his head. He’s gonna apply smart pressure. He’s not going to get reckless. You can apply pressure and try to get in there and bang, but you have to apply smart pressure,” said Diaz.

“At this point, I can tell you, 95 percent of the people are looking for Marquez to win, and they think Marquez is going to win,” said Diaz. “But the other five percent, that’s only the team and the family. But after the fight, the other people will come and say, ‘I knew you were going to win.'” 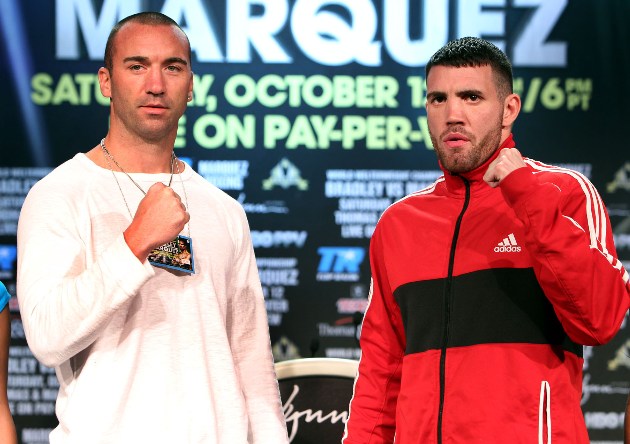 “We’ve got people from all over coming out. We’ve got about 150 people from Long Beach coming out,”said Monaghan, who is coming off a first-round knockout of Dion Stanley in April that followed a crowd-pleasing win over Roger Cantrell in January.

“I think there’s a big crew of 50 Irish guys coming out from Philadelphia. We’ve got close to a hundred guys from my hometown in Ireland coming out. So you’ll be able to hear them. Any kind of stress that I have, I run that off on the track before the fight. I’m in peak shape right now, and I could go 10 rounds with anybody in the world right now.”

THE REST OF THE CARD