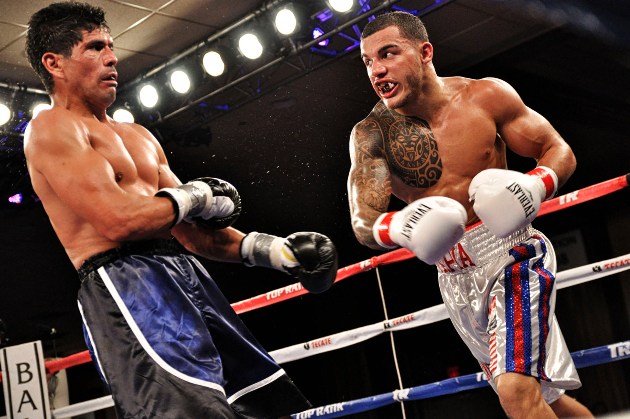 LAS VEGAS — Top Rank CEO Bob Arum said that negotiations are nearly complete for a junior middleweight bout between Glen Tapia and James Kirkland that could happen on the Dec. 7 undercard of Guillermo Rigondeaux–Joseph Agbeko in Atlantic City.

“It’s done on our side,” said Arum during an interview on Thursday in Las Vegas, where he was promoting Saturday’s WBO welterweight title bout between titleholder Tim Bradley and Juan Manuel Marquez.

“I think that [HBO’s] Peter [Nelson] is finishing it up with 50 Cent, Kirkland’s promoter. So, I assume that it’s done. HBO has taken care of it with us, and we’re all set.”

Tapia (20-0, 12 knockouts) was most recently in the ring last month for a fifth-round knockout of Elco Garcia as part of Top Rank’s Solo Boxeo Tecate card in Atlantic City.

A 23-year-old from Passaic, N.J., Tapia had also come up with a bloody eighth-round technical knockout victory over Abraham Han in July. A former sparring partner for Manny Pacquiao, Tapia is managed by Pat Lynch, who handled the late Arturo Gatti.

“I think that we’re very close,” said Lynch. “I mean, we’ve agreed to all of our terms, and I understand that 50 Cent is on board, and that we have to just work out one other detail on their side and the fight’s on.

“So we’re excited. It’s a great opportunity for Glen, and I’m nervous as always. But it’s a great fight, and I’m happy that it’s going to be on HBO. I’m so grateful for this opportunity, and we’re looking forward to the challenge.”

A 29-year-old southpaw, Kirkland (31-1, 27 knockouts) was last in the ring for a 10th-round disqualification victory over current IBF beltholder over Carlos Molina in March of last year. Before that he scored a third-round stoppage of Alfredo Angulo after being dropped in the first round.

“I was happy when I was told about it,” said Tapia. “It’s a great fight for me right now. How he trains and how he fights, he’s always in shape when he goes in there. I don’t think that he’ll be rusty.

“In my last fight, I felt like I got hit too much and that I was a little too sloppy and a little sluggish. I know what was wrong. I don’t like to make excuses. I will definitely switch up. I hope that they look at that last fight and think that’s how I’m going to be for this fight. I’m just ready.”