Chavez-Vera II in talks for February 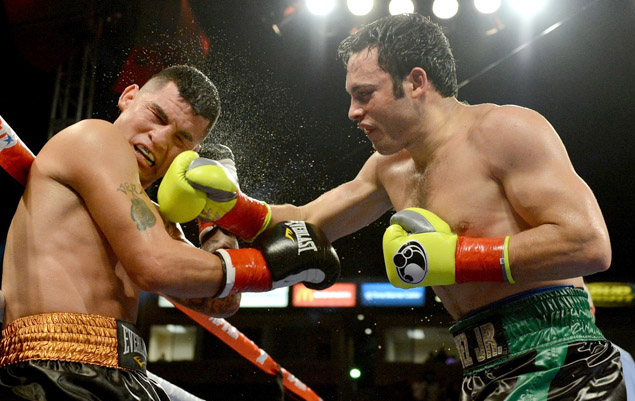 LAS VEGAS — Top Rank CEO Bob Arum said that a rematch between Julio Cesar Chavez Jr. and Bryan Vera, originally planned for Dec. 14, is now is being targeted for February in Vera’s home state of Texas.

“I talked with Chavez. He and his father came to see me. They want that fight,” said Arum during an interview on Thusday at The Wynn Hotel where he was promoting Saturday’s bout between Tim Bradley and Juan Manuel Marquez. “Unfortunately, HBO’s budget doesn’t permit it for this year. So we’re looking for a date in February, where we’ll get it done.”

Chavez-Vera I began with controversy when Chavez’s failure to make weight led to a 173-pound catchweight that was negotiated by Arum and Vera’s promoter, Artie Pelullo, and ended with a controversial unanimous decision in favor of Chavez. The return bout would happen at the super middleweight limit of 168, according to Arum.

Arum and Pelullo will be in Colorado together next week, where they will be promoting a WBO junior welterweight fiight between beltholder Mike Alvarado, who is promoted by Arum, and Ruslan Provodnikov, who is handled by Pelullo.

“I will be talking with Artie, probably in Denver, about the particulars of the fight,” said Arum. “I think that Artie, from Vera’s side, wants to do the fight as well. Texas is fine. Vera comes from Texas, and Chavez is tremendously popular in Texas, so why not?”