Lomachenko focused on Ramirez, not Salido-Cruz or Rigondeaux 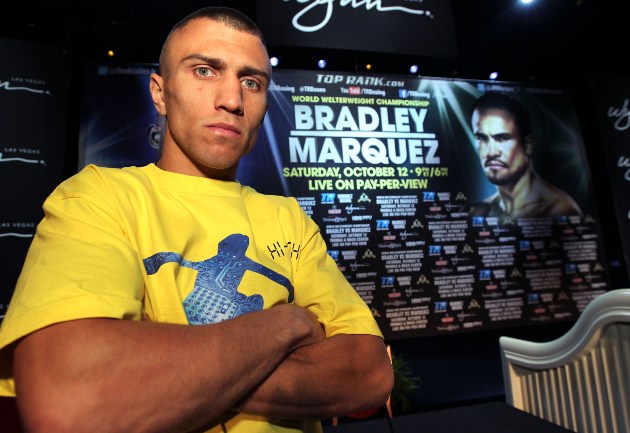 LAS VEGAS — Ukrainian Vasyl Lomachenko, a winner of his second Olympic gold medal at the 2012 Games in London, is on the fast track toward making himself as big a name as a professional as he was as an amateur.

“Everybody that I’ve talked to said that this young man is something special, and on Saturday night, people will get an opportunity to see just how special he is,” said Arum, calling Lomachenko, “the greatest amateur fighter in history” during Thursday’s final press conference at The Encore Theater at The Wynn Hotel.

“We know that he’s bitten off of a lot, and it’s not something that we would ordinarily recommend that a fighter do. But he has such a confidence in his ability, and it seems justified by the way that he performed in the amateurs, that this will be a most interesting match. “

Salido-Cruz, and, Lomanchenko-Ramirez will happen on the Tim Bradley–Juan Manuel Marquez HBO Pay Per main event at The Thomas & Mack Center.

“We’re not just here to make a pro debut, we’re hear to make history. I believe that he is one of those guys who can bring the sport of boxing back. I’m not looking to get the easy way. He’s not looking to beat nobodies as an opponent. He wants to get the tough fights, and he wants to prove that he’s the best,” said Lomachenko’s manager, Egis Klimas.

“As Bob already mentioned, he’s made history as an amateur, now he wants to make history as a professional boxer. Being his manager, it was not an easy decision to get him into this 10-round fight. If he wins, he’s going to jump into a championship bout, which will not be easy. This man has been training hard all of his life. He started boxing way back and he doesn’t remember when.”

Lomachenko won the featherweight gold medal at the 2008 Beijing Olympic Games, where he was the recipient of the Val Barker Trophy as the event’s Outstanding Boxer. On the way to capturing his second gold medal in the lightweight division in 2012, Lomachenko scored a victory over Puerto Rican Felix Verdejo, who is 8-0 with six knockouts after having signed with Top Rank.

Lomachenko signed with Top Rank with the intention of fighting for a title in his second professional bout.

“The biggest transition will the timing, and how to prepare yourself not just for three rounds, but for 10 rounds. How to save yourself for later rounds. That’s probably the biggest transition, managing yourself to that timing,” said Lomachenko. “As an amateur, you have to do a lot right from the start, but as a professional, I can be calmer and take a little more time. This is the opportunity that I want, and I can’t predict what’s going to happen.”

Although Lomachenko wants a knockout, he won’t force it.

Guillermo Rigondeaux is believed to be the man to have won a title fight in the least amount of professional fights, winning the WBA’s bantamweight belt in his seventh bout by split-decision over Ricardo Cordoba in November of 2010. [See notes below]

There has been talk of eventually matching Lomachenko and Rigondeaux, but Lomachenko, appearing to say that he’s not ready to move that fast, declined to discuss Rigondeaux or Salido-Cruz.

“I’m not going to talk about Rigondeaux. I’m not interested in watching [the Salido-Cruz] fight, and I’m not talking about it. I’m just concentrating on Saturday night’s bout. So be patient and I will be doing big things, and you’ll be witnesses when I do them.”

Notes: According to research provided by Lee Groves of RingTV.com, Saensak Muangsurin holds the record for fighters requiring the fewest number of professional fights to capture a major title, doing so in just his third bout.

After stopping top-tenner Rudy Barro in the first round and another contender in Lion Furuyama in seven, Muangsurin shockingly dethroned WBC junior welterweight champion Perico Fernandez, a 46-fight veteran, by eighth round knockout on July 15, 1975 in Bangkok Thailand’s Hua Mark Stadium.

Another fighter who won his title in an extremely short time frame was another Thai in Veeraphol Sahaprom, who became a major titlist in his fourth professional outing on September 17, 1995 in Nonthaburi, Thailand.

Sahaprom did so with a split decision over WBA bantamweight king Daorung Chuwatana. Sahaprom lost the belt in his first defense, but once he regained it, he held it for 14 defenses and more than six years.

The shortest route to a major title in terms of time was set by Jeff Fenech, who captured the IBF bantamweight title from Satoshi Shingaki after having been a pro for only 196 days with a ninth-round technical knockout in his seventh fight.

Nicknamed, “The Marrickville Mauler,” Fenech turned the trick on April 26, 1985 at Sydney’s Hordern Pavilion. If Lomachenko is to break that record, he’d have to win a major belt by April 25, 2014. Ironically, Fenech also turned pro on October 12, but in 1984.