Cotto ‘in a very good place’ after Rodriguez victory 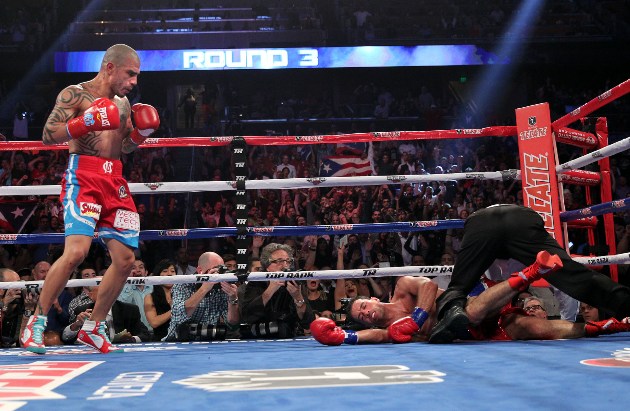 LAS VEGAS — Miguel Cotto’s legal advisor, Gaby Penagaricano, said that the three-division titlewinner will be “in a good position” to negotiate when he arrives in Las Vegas on Thursday to meet with Top Rank officials to discuss his future in the wake of last weekend’s third-round knockout of Delvin Rodriguez.

Penagaricano has said that Cotto is “a free agent” even as he has aligned with Top Rank for his fight with Rodriguez after having lost consecutive unanimous decisions to Austin Trout and Floyd Mayweather Jr. under the banner of rival Golden Boy Promotions.

A rematch with Mayweather has been mentioned for Cotto as have potential bouts against RING and WBC middleweight champion Sergio Martinez and Canelo Alvarez, who was dethroned as RING 154-pound champion by Mayweather via majority decision last month.

“This is nothing different than always. We’ll sit down with everybody and look at opponents, numbers, money. Obviously, Miguel is in a very good place to be after such a great win,” said Penagaricano, during an interview Wednesday at The Wynn Hotel. “So he has all of those options on the table. So it’s a good position to be in, and we’re going to look at it responsibly and look at each option and do whatever is best for Miguel.”

Potential hurdles are presented by proposed bouts against Mayweather and Alvarez, who work with or are promoted by Golden Boy Promotions and televised on Showtime and Showtime Pay Per View. If Cotto is working with Top Rank, it’s a given that he will continue to fight on HBO.

“Obviously, we know that the promoter had nothing to do with the losses. We have a very good relationship with [Golden Boy CEO] Richard [Schaefer] and [Golden Boy President] Oscar [De La Hoya] so the experience was very good, as it has always been,” said Penagaricano.

“They’re our Golden Boy friends. For Miguel, in particular, with Top Rank, there has sort of been a more personal relationship because of all of the years that he was working with them since his pro debut. So, that was basically the difference.”

A RingTV.com poll of fans favored Cotto against Alvarez.

Martinez is advised by Sampson Lewkowicz, and handled by promoter Lou DiBella, who has a strong relationship with HBO.

“Before the fight, [Lewkowicz] called, and Lou called. So, again, that’s a possibility, but it’s too early,” said Penagaricano. “We need to know what they’re expectations are, we need to know, again, what makes the best sense for Miguel. I think that [a fight with Alvarez] would be a very big fight, of course. We’ll look at all of the options.”

Lewkowicz said Martinez’s belt would be on the line against Cotto at a weight to be determined.

“This is up to Lou DiBella and Top Rank to work it out and to make the fight happen, because I believe that people want it. I would like to see it happen because it’s a 50-50 fight, and people love the idea, and it’s a historical fight. The way that Top Rank conducts the pay per view, it would be very successful. Most likely, the biggest pay day for both of them. It would definitely be for the WBC middleweight title,” said DiBella.

“First, we would need to make the fight, and then, after we make the deal, economically, then we can talk about weight and all of the rest of the details. We would target between April and June in order to maximize the attraction of the fight. We’ve had some discussion, but it’s only the beginning. Lou DiBella would be the one to negotiate and make the final decision. I’m only the middle man to make sure that everything is fine. But I have full trust in Bob and Todd as well.”

DuBoef said on Tuesday that Cotto’s “fight was an important fight for him both mentally and physically,” adding, “I think him and [first-time Cotto trainer] Freddie Roach really connected.”

“All of a sudden, he looked 32 years young rather than 32 years old,” said duBoef. “That’s what everybody is saying, ‘How young he looked, and how fresh he looked.’ I think that there’s a bright future and he just re-established himself as one of the kings of the sport.”