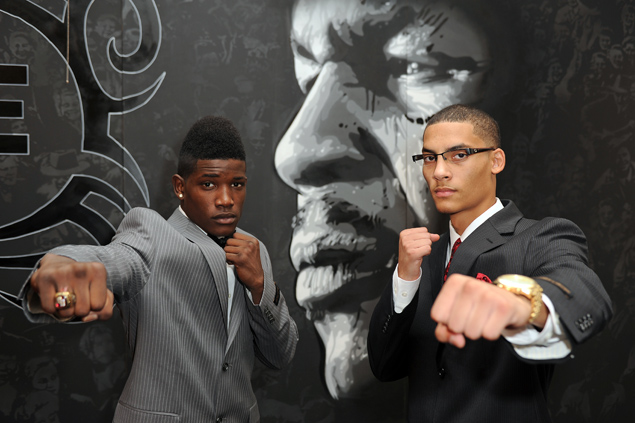 Less than two months into his endeavor as head of Iron Mike Productions, Tyson made his biggest move yet Tuesday with the addition of top American amateur Erickson Lubin to his fledgling stable.

However, the signing caught the ire of USA Boxing.

Lubin, who turned 18 on Tuesday, is the struggling U.S. amateur program’s best chance at winning a medal at the 2016 Olympic Games. USA Boxing president Dr. Charles Butler wrote an open letter to Tyson that same day in a last-ditch effort to convince the former heavyweight champion to reconsider the pact and “do the right thing.”

“We ask, Mike, that you stop actions that will end these athletes’ Olympic dreams,” Butler wrote in reference to Lubin, though the Florida native was never mentioned by name. “The value of these youngsters can increase dramatically if they become Olympians and, better yet, Olympic medalists. You are offering them a pittance of their future worth.

“Let our young boxers develop and represent the United States proudly in Rio de Janeiro,” Butler continued. “Don’t hurt your country by signing these athletes before they are ready to make the transition to professional boxing. Let’s work together to protect our fine young men and women as they seek to fulfill their Olympic dreams.”

The U.S. Olympic men’s team didn’t medal in 2012. The last American male boxer to earn a gold medal was Andre Ward at the 2004 Games.

The exit of Lubin, who won this year’s national Golden Gloves title in the 152-pound division, will hurt America’s chances of earning any medal, let alone a gold.

But why is that Tyson’s problem?

His prerogative is to build the best roster of fighters he can, and to act on their behalf. And the acquisition of Lubin bolsters his stable. Tyson doesn’t work for USA Boxing and looking out for the best interests of the Olympic team isn’t his Modus Operandi.

On Friday, Tyson responded with a letter of his own and he was clearly frustrated by Butler’s public call out.

“Your organization never attempted to contact me directly to discuss this matter,” Tyson wrote. “Had you done so, perhaps you would have a better understanding of my love for amateur boxing and my commitment to protect fighters by giving them the best possible opportunities this business can offer.”

“Many of these boxers are like me in that they are from poverty-stricken communities and boxing is their only way to a better life,” Tyson added. “They have obligations beyond your personal vision for them. No one has the right to question the path a fighter chooses in pursuit of their American dream.”

He didn’t force Lubin, of Kissimmee, Fla., to sign a contract. Lubin has free will and can do as he pleases. Clearly, the chance to earn immediate money appealed most to him – that’s Lubin’s call. And while success at the Olympic Games, and more so winning gold, can greatly enhance a fighter’s earning power, many of the best fighters of the past 20 years didn’t even qualify for the Olympics.

Tyson himself missed the cut for the 1984 U.S. Olympic team. Manny Pacquiao didn’t represent the Philippines in the Olympics and Floyd Mayweather Jr. was on the U.S. team in 1996, but had to settle for a bronze medal. Amateur success isn’t necessarily a precursor for great things in the pros.

Butler also stated in the letter that Lubin would have had access to the world class Olympic training facility in Colorado Springs, Colo., as well as free boarding. Those are great perks, but the USA Boxing team has been in disarray for some time. That likely played a big part in Lubin’s decision to turn pro.

Whether or not Lubin made a mistake remains to be seen.