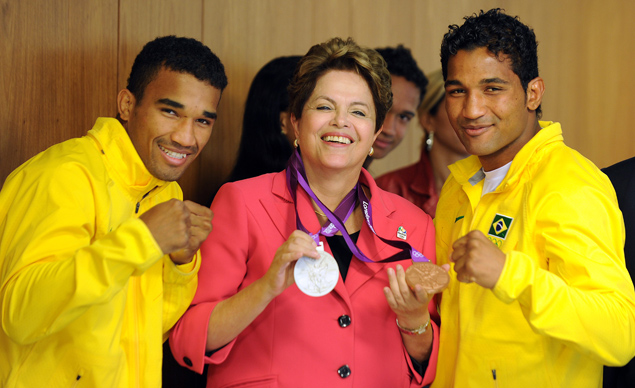 Brazilian President Dilma Rousseff (center) poses with Yamaguchi Falcao (right) and Esquiva Falcao (left), brothers and Olympic medalists in the London 2012 Olympic Games, during a meeting at Planalto Palace in Brazil, on Aug. 14, 2012.

Golden Boy Promotions has announced the signing of Brazilian Yamaguchi Falcao, a light heavyweight bronze medalist in the the 2012 Olympic Games in London.

“Yamaguchi Falcao is a top-tier talent and a major signing for us,” said Richard Schaefer, CEO of Golden Boy Promotions. “He has the skill and charisma to become a star, and with the entire country of Brazil behind him, the sky is the limit for him.”

“The signing of Yamaguchi Falcao is a extremely exciting to me. I have had the pleasure and honor of managing the first Brazilian boxing Olympian in 44 years,” said Arellano.

“This is a historic and epic moment for all, and now, we move on to the pros. We will use this as an opportunity to rebuild boxing in Brazil.”

A native of Vitoria, Espirito Santo, Brazil, Falcao was born into combat sports, as his father was a former mixed martial artist who gave his son the first name of his Japanese trainer, Yamaguchi.

Along with his brother, middleweight Esquiva Falcao, a winner of a silver medal in the 2012 Summer Games, Yamaguchi Falcao entered the world of amateur boxing, hoping to one day escape the poverty they grew up around.

“I’m honored to be signed with Golden Boy Promotions and I appreciate the faith they have in me,” said Yamaguchi Falcao. “I promise to train my hardest and fight my best to one day become a world champion.”