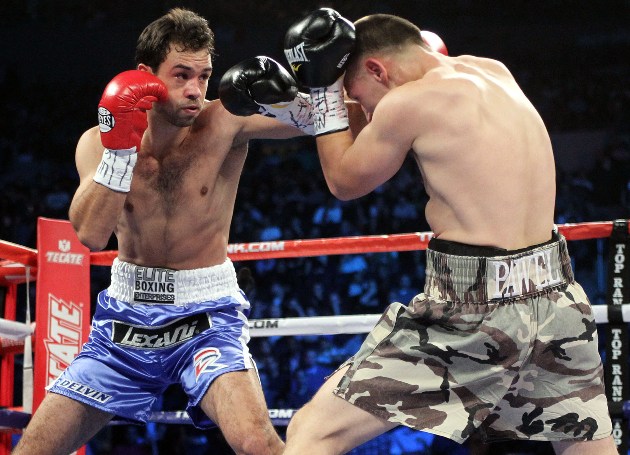 On Saturday at the Amway Center in Orlando, Fla., three-division titleholder Miguel Cotto faces junior middleweight Delvin Rodriguez in an area where the popular Cotto will be the A-side opponent, similar to how Julio Cesar Chavez Jr. was for his controversial unanimous decision over Bryan Vera last weekend at The StubHub Center in Carson, Calif.

Chavez-Vera happened on the heels of a previous controversy surrounding Floyd Mayweather Jr.’s majority decision over Canelo Alvarez on Showtime on Sept. 14 at the MGM Grand in Las Vegas.

In addition, like Chavez-Vera, Cotto-Rodriguez is being televised by HBO, meaning that the world may be watching. As a result, HBO’s Jim Lampley asserts that the Florida Commission, fairly or unfairly, will likely be under scrutiny by the boxing community on Saturday night.

“It is unfair for Florida to be on the griddle for problems that came up in Nevada and California. Everybody runs their own system, and everybody appoints their own judges according to their own criteria, and I doubt that what goes down in Florida is exactly the same thing that goes down in California and Nevada in terms of selecting, hiring and the officials and scorers,” said Lampley.

“On the other hand, the fan base is watching. The fan base wants to see fights scored correctly, and it’s an interesting position for Florida, because I don’t recall walking away from Florida with any controversy regarding scoring… Now, here they are, basically having to carry water for the whole sport on Saturday night on the subject of judging. Let’s just hope that their judges are able to see what goes on in the ring.”

On Monday, Rodriguez’s promoter, Joe DeGuardia, revealed the fight officials for Cotto-Rodriguez to be referee Frank Santore Jr. and judges Mike Ross, Mike Pernick and Rich Green, all of whom are from Florida.

Neither Florida State Athletic Commission executive director Cynthia Hefren nor assistant executive director Frank Gentile could be reached for an immediate comment, despite repeated attempts to contact them through communications department representatives on Monday, Tuesday and Wednesday by RingTV.com.

Beth Frady, deputy communications director for the commission, responded in an e-mail to RingTV.com by directing attention to the organizations procedures for selecting its judges.

“In order for a judge to be assigned to an event, they must hold a current license for that specific sport and meet the requirements outlined,” in the rules, stated Frady. “We are looking forward to this weekend’s event.”

DeGuardia said, “Certainly the judging is  a concern.”

“Delvin is going to have to do what he needs to do to win the fight. It’s on my mind too, and these things can’t keep going on. I don’t want to presuppose that it’s going to happen in this fight. But I’m just going to just expect that Delvin goes in there and he fights the fight that he’s supposed to fight, and if he wins the fight, then I expect him to get the fight,” said DeGuardia.

“If he doesn’t, I’ll cross that bridge when we get to it. We don’t control the judges. We don’t control the referees. Those are things we can not control…We know that we’re going into the lion’s den, so to speak, and we know that he’s going to be in an environment that’s pro-Cotto. But these are what opportunities are made of, and Delvin’s got to go out there and make the best of his opportunity and do what he has to do to win the fight.”

KIKO MARTINEZ TO FACE JEFFEREY MATHEBULA ON DEC. 21 IN SPAIN

“Maravilla Boxing is the local promoter, and there is also Gary Shaw,” said Sergio Martinez’s advisor, Sampson Lewkowicz. “There is also Bronco Sports, from South Africa, and Sampson Boxiing.”