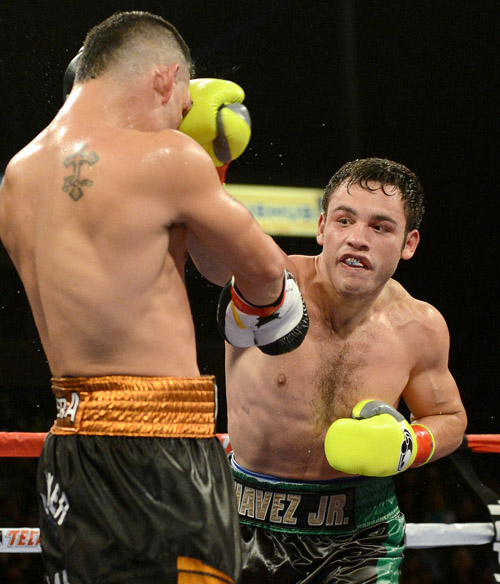 The Los Angeles Timesstory by one of the most respected and sage sportswriters of our time, Bill Dwyre, had this headline: “Julio Cesar Chavez Jr. Wins by Acrimonious Decision.”

It was certainly thus at StubHub Center in Carson, Calif. Chavez escaped somehow with a win against Brian Vera, of Austin, Texas, like David Copperfield from that exploding building on YouTube.

Chavez’s proverbial house may not be blowing up, but the foundation has more cracks than the sidewalks in Los Angeles.

Another headline before the fight might have been: “Julio Cesar Chavez Jr. Decides to be Apathetic.”

While we can never know the heart and mind of an athlete, there is the idiom “actions speak louder than words.” In this case, it is the lack of action on Junior’s part to maximize his talents, which has even his most enraptured fans grumbling.

Not to mention the legacy of his father, for which he owed and benefited by genealogy the adulation and support received from the Mexican fans before he ever stepped into the ring as a young and unproven instant icon.

There apparently is no fire in his belly. But we did notice a bit of a belly when he waddled into the ring against Vera. We do not know his actual weight at the time of the fight. He refused to step on to the scales for HBO. Let’s just say his heft was estimated to be hovering north of 190 pounds.

Trainer Joel Diaz in Indio, Calif., confirmed to me he was approached by the Chavez camp a couple of months ago about the possibility of training Junior.

He said with a chuckle, “They know where I am. If he wanted to come here he could have.” This is with the full knowledge that Chavez would never succumb to the hottest training facility on the planet in the 120 degrees summer heat of the desert that is the Diaz boot camp.

“Well, no one has trouble making weight here,” says Diaz with a smile.

But instead of rehashing all the ways the Chavez Camp was able to manipulate the system from weight limits (or lack thereof) to the number of rounds, let’s play it forward.

There are larger issues ahead for Chavez from a business and fan base perspective.  And those two issues are not mutually exclusive.

Going back a year ago Chavez was a huge disappointment in his loss to current THE RING/WBC middleweight Champion Sergio Martinez. His trainer at the time, Freddie Roach, won’t talk about it now, but dealing with Chavez, Jr. is as frustrating as a Rubik’s Cube.

Chavez-Martinez sold out the Thomas & Mack Center in Las Vegas. That’s approximately 17,000 butts in the seats. Another 475 thousands butts on the sofa bought the Pay Per View telecast. That’s big business and put Chavez as one of the top draws in boxing.

Then, of course, he gets busted for “smokey da dopey” and gets suspended and fined by the Nevada State Athletic Commission. No big deal, right? Well, that, plus all the shenanigans leading up to the Vera fight apparently took a toll on his fan base.

StubHub Center is set up for boxing inside a world-class tennis facility, which holds 8,000 fans. Official attendance for the Chavez/Vera fight was 5,206. That was a bit stunning to most ringside observers. Sure, he was fighting a relatively unknown in Vera, but the name “Chavez” sells out, does it not?

In an unscientific survey, before the fight, I noticed a street vendor in the parking lot hawking “Chavez” red headbands. He had thick fistful of these unsold. We’ve seen these red indicators of Chavez familial support for 30 years around the fight scene. “Business good tonight?” I asked. The bandana vendor replied, “No bueno.”

But things need to get “bueno” soon or Chavez is going to miss out on a great chance to turn his public relations deficiencies around. And this could come by next spring.

The chance is Andre Ward, the current RING super middleweight titleholder and the consensus champion of the 168-pound division. Ward has a comeback fight Nov. 16 at the Citizens Business Bank Arena in Ontario, Calif., against Edwin Rodriguez. He has been laid off for 14 months and has recovered from shoulder surgery.

Once that bit of business is completed in Ward’s favor, Chavez Jr. is in his sights.

“That’s the fight that HAS to happen. That’s a pay per view fight, and we and HBO need to make it happen,” says Ward.

When pointing out that Junior will not be able to dictate to Ward any funny business about the weight limit, Ward says, “He knows that.”

“This kid can fight. He’s got a lot of his father in him,” continues Ward. “He is a tall, big kid. He throws great short shots with great timing. The kid can box.”

Yes, Andre, we know this. We’ve seen this. Any words of wisdom?

“He’s got to dedicate himself to the sport. He can be around for a long time. But if he keeps playing Russian roulette with the game, one day it’s going to end in a bad way.”

That day could be against Ward. We shall see.

The question is will Chavez Jr. rise to the challenge?  Who the hell knows?

Next stop on the “Money” train

Don’t give up on Mayweather-Pacquiao