Gavin fails to shine in win over Barnes 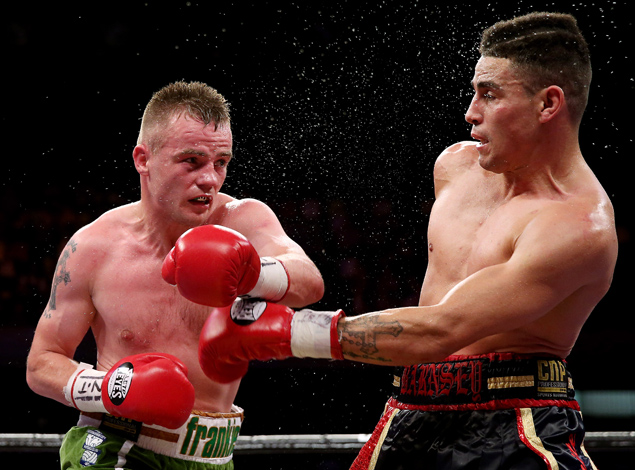 Frankie Gavin catches David Barnes with a left cross during their British and Commonwealth welterweight championship bout at The Copper Box on Sept. 21 in London, England

English welterweight contender Frankie Gavin maintained his perfect record with a straightforward, albeit pedestrian, points victory over countryman David Barnes at The Copper Box Arena in Hackney, London, on Saturday.

In his third outing of 2013, the 27 year old from Birmingham retained his Commonwealth and British titles – winning the Lonsdale Belt outright in the process – as he proved himself to be a class above the once highly-rated Barnes.

But this latest triumph for Gavin (17-0, 13 knockouts) will not live long in the memory. Having two southpaws certainly did not help the flow of action and by the end it was clear Gavin was as frustrated and unhappy as anybody with his uneventful performance – if not the result.

Former British titleholder Barnes (27-3-2, 12 KOs) showed the occasional glimpse why he was tipped to reach the top of the 147-pound division a few years ago.

But despite quick hands and slippery defense, the 32-year-old challenger from Manchester rarely moved forward during 12 lifeless rounds, and never threatened an upset against the busier Gavin, who was able to stroll to a one-sided success.