Alan’s Observations: Next stop on the “Money” train? 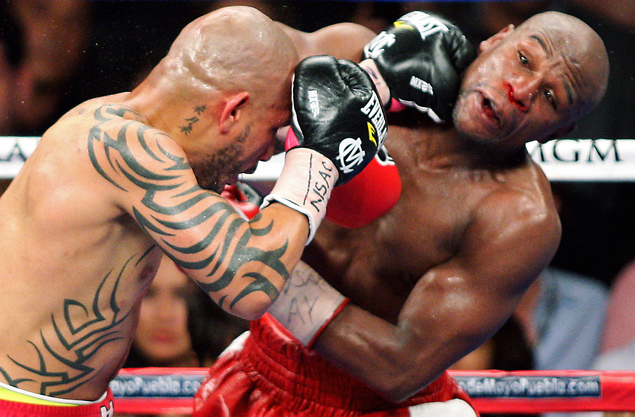 Miguel Cotto lands a hard jab to Floyd Mayweather during their WBA 154-pound title fight at the MGM Grand in Las Vegas last May. Cotto, who fights Devlin Rodriguez on Oct. 5, lost a unanimous decision but gave Mayweather a tough fight. Could he be in the running for a rematch?

Before interviewing Hall of Fame Trainer Freddie Roach this week about his preparations with Miguel Cotto for his upcoming fight with Delvin Rodriguez Oct. 5in Orlando, Fla., Roach paused to ask ME a question.

“Can you think of four fighters who can take on Floyd Mayweather?” he inquired. Roach was referring to the four fights left on Mayweather’s deal with Showtime.

“Not really,” was my simple answer. And that is the answer amongst all the boxing insiders and outsiders queried in the few days since Mayweather dominated Saul “Canelo” Alvarez.

Then Freddie glanced over at his latest project, Cotto. “Well, why not?” I said. There could be worse match ups. Much worse. 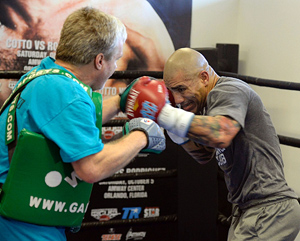 We will see how Cotto looks in his upcoming fight. To see and hear how Roach is trying to rebuild Cotto after two losses to Mayweather and Austin Trout, check out the video we shot for RingTV.com at the Cotto media workout at the Wild Card Boxing Club in Hollywood, Calif.

Cotto has this going for him. He actually hurt Mayweather in their fight in May of 2012. He actually made the immortal Mayweather BLEED. Hit him with a left hand to the nose in the fifth round. To repeat: Cotto actually HIT Mayweather. Afterwards, the “Money Man” said Cotto was the toughest opponent he has ever fought. This sentiment still holds true.

Cotto is also in the rare position of determining his own fate. His current deal with Top Rank is fight by fight. He can go back to Showtime and Golden Boy Promotions if he sees fit. To their credit, both promotional companies believe Cotto has earned that right.

This is not to make a case for Cotto vs. Mayweather II. It is rather a process of elimination. Let’s go down the potential opponent “rabbit hole,” shall we?

Trainer Abel Sanchez had a quick answer. “Gennady Golovkin.” Okay, we buy that. Golovkin is the WBA middleweight champion, and, of course, Sanchez is Golovkin’s trainer.

Sanchez says, “This kid (Golovkin) has only been on the American market for a couple of years. The hard-core boxing fans know him because of his method of destroying opponents. Once he is more well known, this is a fight the public will want.”

Of course, there’s the Showtime vs. HBO thing isn’t there? Sanchez believes, “Money talks. Floyd is a genius at promotion. If he wants this challenge he will figure a way.” 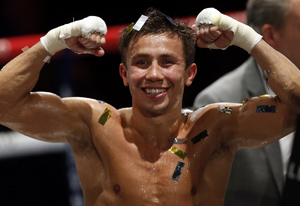 Tom Loeffler of K2 Promotions, who represent Golovkin, follows up. “If Floyd wants to make it happen, he could make it happen. It’s not like we will be calling out Mayweather, but if the fight can be made at 154 we will make it. Holyfield and Tyson had more issues than this fight and that happened, so this can happen. American boxing fans like knockouts, and Golovkin with 14 knockouts in a row, is what they like to see. Golovkin makes people fight. He comes forward, cuts off the ring, and he fights.”

Golovkin has a 15th potential sequential KO in store for Curtis Stevens on Nov. 2 at Madison Square Garden in New York.

Now that we’ve planted the “GGG” seed, what else?

Let’s start with the next “logical,” RING/WBA/WBC junior welterweight champion Danny Garcia, who just defeated and beat up Lucas Matthysse.

Then there’s the “at what weight?” factor. Trainer Joe Goossen said, “What about Sergio Martinez?” Then when asked, “Would Sergio at age 38 be effective at 154?” Goossen said, “Good point.”

Sergio wants the fight, but who doesn’t want a piece of the Money pie? (Sergio is also a lefty. Conspiracy theorists have fun with that one.) Julio Caesar Chavez, Jr.? He definitely won’t make 154. Junior is aiming at Andre Ward and vice versa. Forty-eight year old Bernard Hopkins said he could make 160. Really?

Then there’s the “problematic next to impossible,” due to promotional and network considerations, Manny Pacquiao or Brandon Rios?

Then there’s the buddy factor, Adrien Broner? Not likely.

Just for the fun of it, I, your humble correspondent, will issue this challenge. I will fight Floyd Mayweather for a mere $250,000. This is contingent on anybody being able to sell a single ticket. I will slim down to 175 pounds (the best I can do). My only stipulation is C.J. Ross, Stevie Wonder, and Andrea Bocelli are the judges. I figure after Floyd wipes me out in the first 15 seconds (I can’t run very fast at my age), I will clear about ten grand after medical expenses.

I apologize for being so flippant, but this “Who’s Next for Mayweather?” equation can lead to silliness and a mild headache.

Anybody else got any ideas?

Don’t give up on Mayweather-Pacquiao