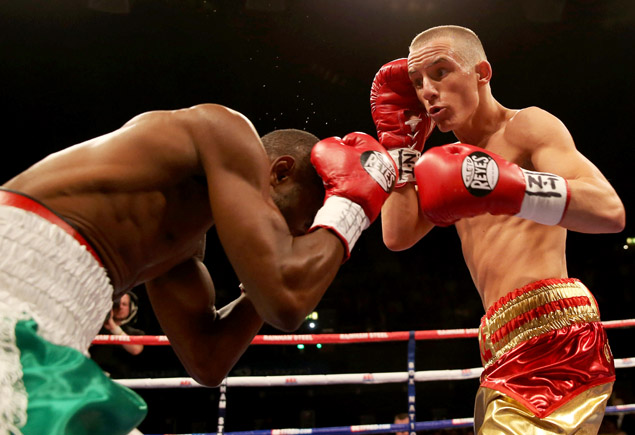 Britain has produced a world champion in every weight class except the junior bantamweight division. That’s something Paul Butler is intent on changing in the near future.

“I want to win a world title. It’s been my goal since my fourth fight when Juan LaPorte told me ‘you‘re coming back to the (Madison Square) Garden and you’ll be a world champion.'”

So far in his nearly three-year pro career, the 24-year-old who lives in Merseyside has won British and Commonwealth titles at 115.

After a strong amateur background that saw him narrowly miss out on the major tournaments, he headed to the pro game where so far he’s looked impressive, going 12-0 with 7 wins inside the distance.

Last time out he impressively stopped late-sub Najah Ali, who’s known for being durable, in just four rounds. Leading into the fight, Frank Warren Promotions matchmaker Dean Powell tragically passed away. Butler was quick to pass on his own tribute, saying, “Devastating news, he was like Mr. Boxing,” also adding, “It’s a tragic loss to boxing. Dean will be sadly missed.”

This Saturday, live from London on Boxnation in the U.K., Butler takes on fellow unbeaten Miguel Gonzalez for the fringe WBO Inter-Continental title, which he aims to use as a spring board to a world ranking.

Anson Wainwright: You meet Miguel Gonzalez on Saturday. What are your thoughts on that fight and on him as a fighter?

Paul Butler: It’s a good fight for me. He’s 17-0, I’ve had twelve (fights) and won them, it’s a good benchmark for me. If I can get past this one it gets me in the WBO rankings.

As a fighter I’ve not seen much of him. I’ve seen a minute clip of him on Youtube but I’m not a big fan of watching my opponents and picking out things. I’ll let my trainer do that and we’ll work on things in the gym. I take what I’ve worked on in the gym and I put it into action. 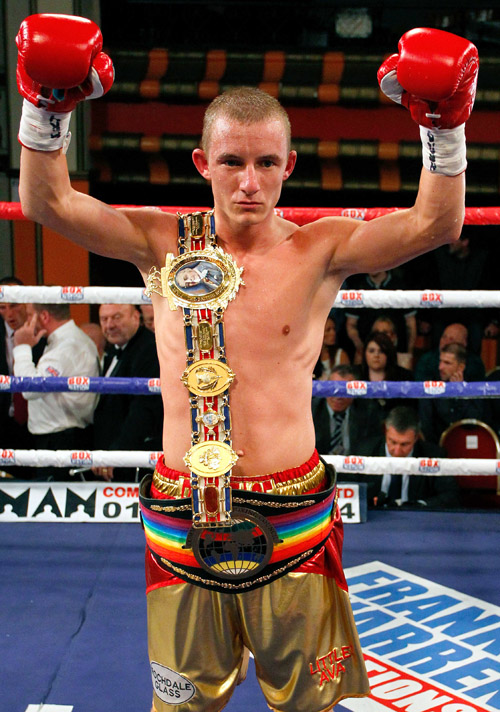 AW: It takes place at the Copper Box Arena on a bill card, how excited about that are you?

PB: Definitely it’s a huge bill and it’s nice to box at the very first professional show at the Copper Box. It’s a great arena, it’s got history already with the Olympic gold medalist from our country winning there. It’ll be nice to showcase myself in London at the Copper Box at such a great arena and great bill to be on.

AW: In your last fight you stopped Najah Ali in four rounds to retain your Commonwealth title. Can you tell us about that fight?

PB: Yeah, Najah Ali, as everyone knows, seems to trouble every opponent he goes in with. He drops some, he’s beaten Don Broudhurst, Michael Maguire, some good kids on his record. He’s no mug and he’s definitely not there to be taken lightly. He came in at a little bit of late notice and I just had to go in there and get the job done. Because he was late notice it was meant to be for the WBO International title but didn’t happen because of the postponement. I had to get in there and be professional about my job and go to work with Najah Ali for my Commonwealth title in the end.

AW: 2013 has been a busy year for you, this will be your fourth fight of the year. How do you assess your development?

PB: I feel since I boxed Ashley Sexton last year before I won the British title I’ve improved every time. After the John Donnelly fight I boxed Anwar Alfadli. I’d boxed him twice before, it was the third time I’d boxed him and I left him flat on his back. You could see how I sat down on my shots and I’ve learned a lot since the Ashley Sexton fight. I’m happy with the progress, everything’s going nicely.

PB: Yeah, well it was always football with me from a young age. My dad was a massive boxing fan, he was good friends with Paul Lloyd (Former British, Commonwealth & European bantamweight champion, twice challenged for a world title: LKO2 Tim Austin & LKO1 Marco Antonio Barrera) I always used to watch Paul Lloyd box and he was from my amateur club. I always remember watching Nigel Benn & Gerald McClellan and that was an absolute war, everyone expected McClellan to walk through Nigel Benn and knock him out. It gave me a buzz and I watched Naz (Naseem Hamed) take out Steve Robinson in Wales and ever since then I went to the gym on the Monday and I’ve never looked back. I stopped playing football and concentrated on boxing. 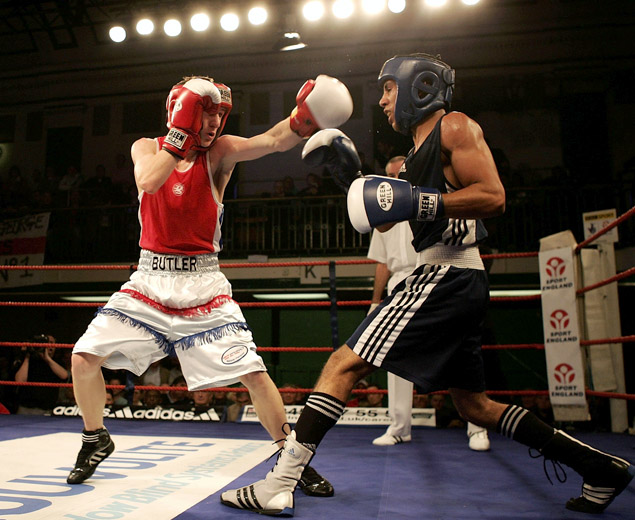 AW: You were a pretty solid amateur – could you tell us about your amateur career?

PB: I had my first bout at eleven, I remember boxing my fourth fight in New York City and Juan LaPorte, who boxed Barry McGuigan, he was there and I got beat – well, I got robbed – and I was crying my eyes out on the side and Juan LaPorte said to me, ‘listen to me, you’re coming back to the Garden to win a world title‘ and ever since I’ve wanted to go on and win a world title.

I always set myself targets. I want to win the British title, Commonwealth, and as an amateur I had a goal of going to the Olympics. When I was 18 I boxed in a multi nations competition in Sheffield; there was two representatives from Britain, me and Darren Langley, he’s just been to the Worlds and missed out on qualifying for Beijing. We ended up meeting in the final, he got a bye to the final and I boxed and I beat Darren – it was the first time he’d been beaten in England in 6 years. He was number 1 at the time. I got picked to go to one of the qualifiers, I got beat by two points against a Turkish fella to qualify for the Olympics. There was one more qualifier to go but amateur boxing, it‘s all favoritism and he got picked. They said it was weight issues – we were both on the scales and he was a kilo lighter than me so they picked Darren and ever since then I walked away from the GB squad. I didn’t think they gave me a fair chance of qualifying for the Olympics. That could have effected my career. I believe I could have done well at the Olympics in the weight I was at.

I’m not one who runs around the ring and chases people, I hate that ‘cause I like to sit down on my shots… So I said to my amateur coach I don’t want to be an amateur any more I want to turn professional. I’d done nothing as a senior except box for GB at the qualifiers. He advised me to go into the senior ABA’s and go on from there. I entered the senior ABA’s and beat Adam Whitfield in the final, 11-1. Two weeks later we had a club show, I boxed on the club show and that was it for me. I was ready to sign a contract with Frank Warren.

AW: It is probably still a little early but I am sure you have one eye on the current world champions. What are your thoughts on them?

PB: The only one I’ve seen is the Argentinean (Omar) Narvaez. I’ve seen a little of bit of him but like I said I don’t really watch my opponents until it’s my time (to fight them). I will watch a world champion, I’ll pick up things on him and look for holes in his defence and stuff like that. But until it’s my time to box for a world title I won‘t be looking at them too much. Narvaez is getting on, he’s 38 now and I think he’s had a couple of close decisions in Argentina, but it would be nice if we could get him over here and I could have a crack at his world title. 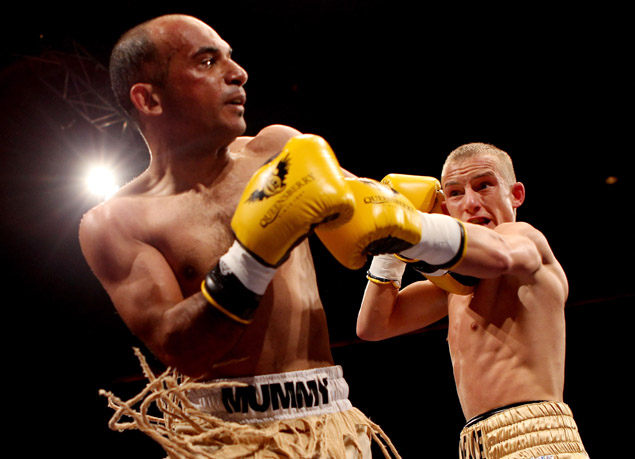 AW: How far away from that sort of level would you say you are?

PB: I need some good rounds under my belt with some tough opposition who are gonna make me work each round to win that round, because to be honest with you I haven’t really had that at the moment. I’ve had some tough opposition but nothing I can’t control or anything like that. I think I need some durable people, maybe a name who’s been there before and on the slide. I think I need a couple of them fights and I think I’ll be ready to step up within the next 8 months.

PB: Huge. He’s awesome, I’m in the gym every day in Manchester and most days Anthony Farnell my trainer’s got DVDs on him and he plays them in the gym, and you‘re watching class operators like Barrera who didn’t duck anyone in his career – he boxed the best – you pick up little things, little things he does in the ring, and you put them into action yourself when you‘re on the pads or sparring.

The name actually came from when I boxed in the Commonwealth Federations when I was 18 in Liverpool. The headline in the (Liverpool) Echo was “Baby Faced Assassin” and ever since then it’s stuck. It’s just coincidence it was also Marco Antonio Barrera’s nickname.

AW: When you‘re not boxing what do you enjoy doing with your spare time?

PB: I like socializing with my mates. I play in a pool league on a Tuesday. I still like to play my Sunday League (soccer); obviously heading up to a fight I stop a few weeks before. I like my Premier League Football (soccer); I like to go and watch Liverpool. I’m a big Liverpool fan. 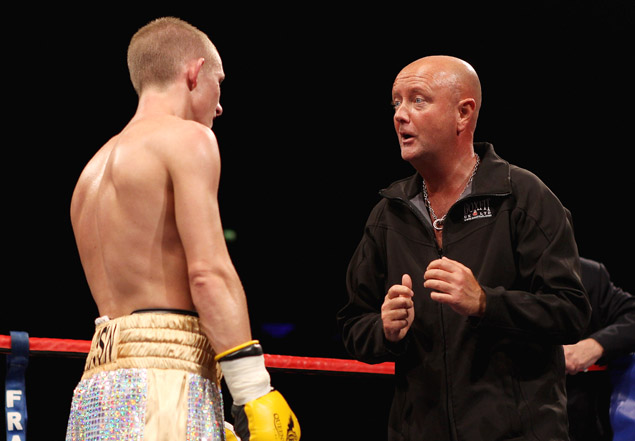 AW: What are your boxing ambitions?

PB: I want to win a world title. It’s been my goal since my fourth fight when Juan LaPorte told me you‘re coming back to the (Madison Square) Garden and you’ll be a world champion. Watching my hero Barrera win numerous world titles, if I could achieve half of what he’s achieved I’d be happy in my career.

AW: Of course recently the boxing world was shocked to learn of the sad loss of Dean Powell, Frank Warren’s matchmaker. Could you share your own thoughts on Dean and the tragic loss?

PB: Devastating news. He was like Mr Boxing. If you ever needed to know anything about any fighters or anything like that, he’d be one of the first you’d speak to. He knew the in’s and out’s of most fighters no matter where they come from. It’s a tragic loss to boxing, as you see on Twitter and the social media sites it’s a huge loss to boxing. Dean will be sadly missed.

AW: In closing, do you have a message for the junior bantamweight division?

PB: Not really, I’m just going to stick to what I’m doing and whoever they put in there I’ll be in there to beat them.