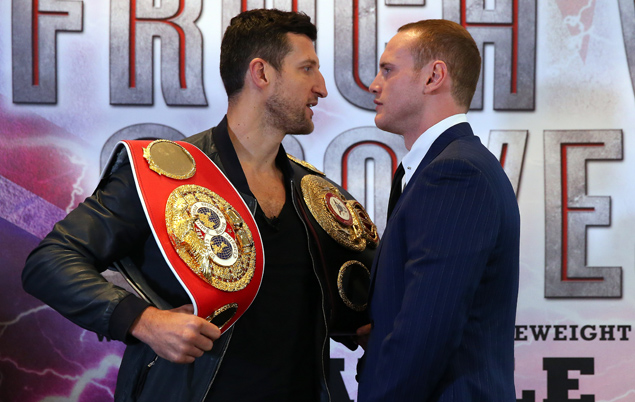 Super middleweight titleholder Carl Froch has warned George Groves there will be no hiding place when they square up in their sold-out grudge clash at the Manchester Arena, Eng., on Nov. 23.

West Londoner Groves (19-0, 15 knockouts), THE RING’s No. 5 at 168 pounds, may be unbeaten as of now but that perfect record will be in tatters in 10 weeks’ time, according to the already-pumped IBF beltholder Froch.

The Nottingham star, 36, is no fan of countryman Groves, who is 10 years his junior, and has vowed to do whatever necessary to floor him on the night – and bring his rise up the elite ladder to a shuddering halt.

For, while he is not taking his threat lightly, Froch is adamant that the huge step up in class will be far too much for the relatively-inexperienced Groves. He has also reminded him of what happened when they sparred together a few years go.

“He’s out of his depth and he is getting beat on the 23rd of November,” Froch said on Sky Sports News. “He’s a trained fighter, he’s unbeaten and he’s got quite a high knockout ratio on his card – against a level of opposition. But boxing, unfortunately for him, is all about levels and I’m in a totally different league to George Groves.

“He’s not mixed at this level in his whole career. He’s tried to mix at this level in sparring and been found out a few times. I’ve put him over myself in sparring, and to be honest, I was pulling my punches when I hit him. I sort of (hit) him with half a shotÔÇªI knew it was going to land, so I pulled it and it still decked him! And he’s been knocked out a few times.

“When those 10-ounce gloves start landing on the chin there is only going to be one result – and that is George Groves being knocked on the floor. It’s going to be a great fight, an all-British world title fight with someone who has been there and done it and someone who is trying to come up. But I don’t think he is at races. He is not at this level and he is going to get KO’d simple as that.

“I’m not into round predictions. You have got be careful. But I can’t see it going the distances. I expect him to adopt a style of hit and run so that if he lost on points he can say that he will come again. But I am confident I will catch him at some point over 12 three-minute rounds.

“I will pin him to the ropes eventually and then let the punches fly, like I did against Mikkel Kessler and Lucien Bute, who folded in pain. At some stage he has to fight for survival. And if he does get up after I knock him down, he will get smashed straight down again. It will end in a KO. So, all I can say to the fans and the viewers is sit down and enjoy it.”

Groves really upset Froch back in May by sparring with Mikkel Kessler – ahead of the Dane’s points defeat to Froch at the London O2 Arena in London. The fact the pair do not get on certainly appears to have caught the imagination of the British fight fans. In spectacular fashion. An incredible 18,000 tickets were sold in just 11 minutes on Tuesday.

Froch (31-2, 22 KOs), though, has dismissed the idea that Groves has any serious pulling power when it comes to box-office appeal.

“It’s unbelievable how many tickets were sold so quickly,” he said. “It’s now the two us, though. It’s about me. If George Groves was fighting someone else it wouldn’t have sold out in ten minutes.

“I wasn’t sure how this would go against this kid. But it shows what a big name I am in Britain and that I am a loyal fighter with loyal fans. They know I always try to go out to win, to do the business and knock opponents out. They appreciate that. It’s why Sky have put this on Box Office (PPV). It demands that platform because it is such a big fight.”