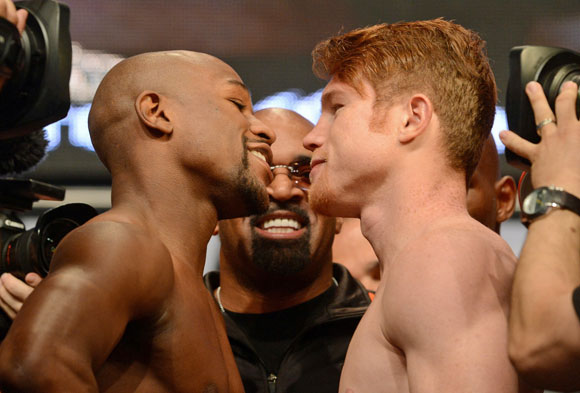 It has to happen at some point, right? We thought we saw some erosion in his unanimous-decision victory over Miguel Cotto, who was able to land more punches than we’re used to seeing Mayweather take. However, the master, with his father’s help, shored up his defense and looked like the hit-and-not-be-hit wizard of old in an easy victory over Robert Guerrero. The guess here is that Mayweather, 36, can hide any deterioration with his remarkable ring smarts for at least a few more fights.

2. WILL THE CATCHWEIGHT HURT ALVAREZ?

“It’s only two pounds,” you might say in reference to the agreed-upon catchweight of 152 even though the junior welterweight limit is 154. A couple pounds can make a difference, though. Alvarez will have to deprive himself a little more and push himself a little harder, which could take a toll in the ring. He can’t afford to fade down the stretch for lack of energy. I doubt this will be a major factor but it’s safe to say that the below-the-limit weight won’t work in Alvarez’s favor.

3. WILL ALVAREZ’S NATURAL SIZE ADVANTAGE BE A FACTOR?

Ability almost always trumps size and strength – almost always. Alvarez is the bigger and almost certainly the stronger of the two, which would work in his favor if the fighters’ skill levels were comparable. Clearly that’s not the case, though. So the question is this: Does Alvarez have enough ability – skills, athleticism, speed, etc. – to make his size and strength advantage meaningful? Most knowledgeable observers would probably answer with a resounding “no.”

4. WILL FIGHTING AT 152 POUNDS SLOW DOWN MAYWEATHER?

Mayweather said that Cotto was able land punches with some consistency because his defensive skills weren’t as fine-tuned as usual, which prompted him to bring his defense-minded father back as his trainer. Could it have been instead that Mayweather, who weighed in at 151, lost a step because he was fighting at junior middleweight? Mayweather looked quick – and his defense was tight – against Guerrero, but Guerrero is relatively slow. The added weight combined with his age could work against Mayweather.

5. IS ALVAREZ READY FOR THIS?

Alvarez surprised the boxing world by outboxing the boxer, using movement and well-timed blows to outpoint a very good technician in Austin Trout in his most recent fight. No victory did more for the Mexican’s credibility in terms of his boxing skills. That said, it’s a giant leap from Trout to Mayweather. Alvarez, only 22 and with a limited amateur background, is a work in progress. His best lies ahead. That might be why Mayweather accepted this challenge when he did.

6. WHICH FIGHTER IS MORE LIKELY TO HURT THE OTHER?

Our collective minds go back to the moment when Shane Mosley buckled Mayweather’s knees before succumbing to the superior boxer’s ability. That was a welterweight fight. Alvarez is a big, strong 154-pounder with considerable punching power. It’s not inconceivable that he could ring Mayweather’s bell. Meanwhile, Mayweather has been known to break his opponents down with fast, accurate shots round after round until they’re ripe for a knockout. Someone will probably get hurt. But who?

The U.S. pay-per-view record of 2.4 million – Oscar De La Hoya-Mayweather in 2007 – would seem to be untouchable. Neither Mayweather nor Alvarez has the star power of the Golden Boy. A buy rate of 1.5 million or higher isn’t out of the question, though. That would make it one of the biggest promotions ever. What makes it so big? Mayweather is a superstar who is facing an opponent deemed a worthy challenger and a huge attraction – particularly among Mexicans – in his own right.

8. WHAT IF MAYWEATHER LOSES?

That’s easy: Rematch. Mayweather demanded a rematch clause in the contract, which some might interpret as a sign of doubt in himself. The decision made absolute sense from a business standpoint, though. Mayweather-Alvarez figures to generate a huge pay-per-view number, which will translate into a huge payday for everyone who gets a percentage of the profits. The rematch presumably would be even bigger if Alvarez somehow pulls off the upset. Mayweather at 44-1 might be more marketable than Mayweather at 45-0.

9. WHAT IF ALVAREZ LOSES?

Alvarez really can’t lose. If he loses the fight, he can say, “Hey, Mayweather is the best boxer in the world and I’m only 22. It was a learning experience.” Plus he’ll walk away with a career-high eight-figure payday, an amount that would make almost any risk worthwhile in prizefighting. Alvarez should just hope to avoid the fate of Juan Manuel Marquez, who looked inept when he fought Mayweather. Even that wouldn’t be the end of the world, though. Marquez survived the setback and got back on track.

No one will supplant Julio Cesar Chavez Sr. in the hearts of fans, who revere him as godlike. Make no mistake, though: If Alvarez finds a way to beat Mayweather – particularly if it comes in dramatic fashion – he will become an enormous icon in a country that loves its boxing. And it won’t stop there. An upset over Mayweather would reverberate across the sports world, lifting Alvarez to superstar status and giving boxing a much-needed shot in the arm. It wouldn’t be Tyson-Douglas but it would be big.