Someone’s ‘O’ has got to go: 10 notable fights between unbeaten boxers – part I 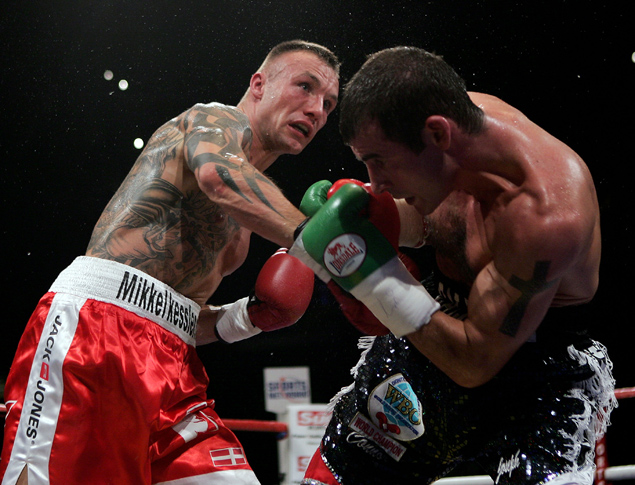 Joe Calzaghe (right), carried a 43-0 record into his super middleweight showdown with Mikkel Kessler (left), who had a 39-0 record at the time of their title unification fight on Nov. 3, 2007 at the Millennium Stadium in Cardiff, Wales.

Floyd Mayweather Jr. and Saul Alvarez will be fighting for more than just “Canelo’s” RING and WBC junior middleweight titles this Saturday. The belts are just physical symbols for prevailing on fight night and for that they will provide instant gratification. But beyond the temporary thrill of victory there are prizes the winner will enjoy for decades to come and for historians to assess for the rest of time. Like the great battles of the past, the final result will shape resumes, alter perceptions and affect legacies.

For Alvarez, a win over Mayweather will cement his place as a worldwide superstar. His flaming red hair and pale complexion already sets him apart as a unique character – redheads make up only 2 percent of the world’s population and an even smaller slice of the Mexican pool – but a victory over an American who also is the reigning 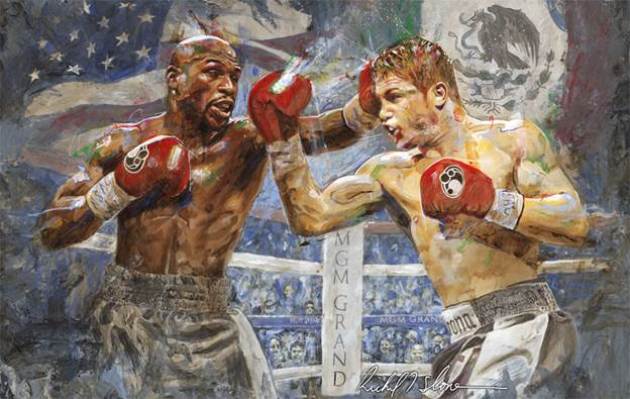 pay-per-view king will vault Alvarez into a stratosphere previously occupied by Julio Cesar Chavez. In today’s media environment Alvarez will become a brand whose price tag will soar into eight figures for each performance, and, at age 23, Alvarez has the potential to become that rarest of commodities – a billionaire athlete. But for that to happen, he’ll have to win, and keep on winning.

For Mayweather, his 45th victory will be just another in an unbroken string of successes. He will collect his second WBC 154-pound belt (he won his first from Oscar de la Hoya in 2007) and his third strap in the division overall, as he beat Miguel Cotto for the WBA title two fights earlier. That’s in addition to the titles he won at 130, 135, 140 and 147 pounds and a win over Alvarez would extend his championship arc into an incredible 16th

Another accomplishment he certainly would relish is if this fight breaks the all-time record for pay-per-view buys, for if that happens Mayweather would be the perceived “A” side of the bout, a spot De La Hoya occupied when he and Mayweather set the current mark of 2.4 million buys six years ago. It would be the ultimate answer to those critics who say he piggy-backed on “The Golden Boy’s” star to create his own.

Finally, there is a cherished numeral that Mayweather and Alvarez dearly want to keep – 0. That’s the figure that occupies both men’s loss columns and in this day and age it carries enormous power and prestige. This is especially true for Mayweather, who has invested his entire self-worth, reputation and place in history on it. His legion of critics have paid thousands of dollars in pay-per-view money to see him lose that zero only to leave frustrated while Mayweather’s vocal supporters have used it as a weapon to bludgeon their adversaries.

Michael Spinks wasn’t known for his public speaking but before one of his most historic battles against a fellow unbeaten he coined an immortal phrase in boxing – “Somebody’s ‘oh’ has got to go.” It was a poetic and succinct description of what’s at stake when two unconquered boxers square off. Barring a draw, one will continue his pristine journey at the expense of the other, and unless he puts up a heroic effort in defeat, the loser’s reputation will forever be tarnished.

The following two-part article will detail 10 of boxing’s most historic “Oh Must Go” fights in which resumes were built and broken. The 1970s rock group Three Dog Night often sung “One is the Loneliest Number” and in boxing that is particularly true. After all, everyone loves a winner – but only one who wins every time.

In the aftermath of Sugar Ray Leonard’s sudden retirement due to concerns spawned by detached retinas, three young welterweights emerged as potential successors. The first was Donald Curry, a soft-spoken Texan with an elegant style, cobra-quick hands and understated power. The second was Hartford, Connecticut’s Marlon Starling, a defensive wizard and master counterpuncher who also could lower the boom with either hand. The third was Detroit’s Milton McCrory, a Kronk acolyte whose mantis-like build and crunching right hands reminded many observers of the gym’s most famous tenant, Thomas Hearns.

Curry and Starling were the first to settle their differences. Their first meeting took place on Oct. 23, 1982, just 17 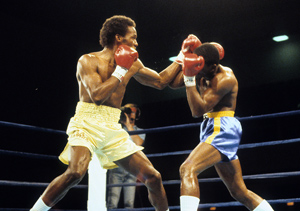 days before Leonard officially announced his first retirement as a pro. Curry’s businesslike boxing impressed the judges more than the New Englander’s flashy “Starling Stomp” and as a result Curry, the NABF titlist, added Starling’s USBA belt to his collection via 12-round split decision. By the time the pair met again nearly 16 months later, Curry had won Leonard’s vacant WBA title by out-pointing Jun Suk Hwang and had blasted out Roger Stafford (whose fight with Leonard was cancelled by the retina injury) in 102 seconds. Starling had won six straight, four by knockout, but the two decision wins over Kevin Howard and Tommy Ayers impressed the WBA enough to merit the rematch. This time Curry’s win was more decisive, thanks to an impressive stretch drive in the final five rounds. 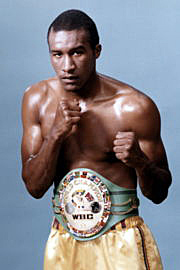 As for McCrory, he equaled Hearns by beginning his career with 17 consecutive knockouts but once he rose to world-class the stoppages were fewer and more hard-earned. After stopping rugged Randy Shields to record KO number 17, he notched three straight decision victories over Pete Ranzany, Roger Stafford and Victor Abraham to earn a crack at the vacant WBC title against Colin Jones. McCrory, a 4-to-1 favorite, out-boxed Jones over the first six rounds but Jones got in enough licks to bloody McCrory’s nose. By the eighth McCrory’s face was a crimson mask and Jones’ pressure left the American’s gas tank dangerously depleted. An inspired 12th-round rally rescued McCrory from a potential first defeat but didn’t prevent him from receiving his first blemish in the form of a draw.

A first-round knockdown proved decisive in their rematch five months later, which McCrory won by split decision. After winning the crown, McCrory’s knockout touch returned as five of his six defenses ended in stoppages – all before the sixth round.

Curry vs. McCrory was a fight three years in the making and by the time they finally stepped between the ropes they were regarded as the two best 147-pounders on earth. Curry was viewed as the favorite based on his more impressive performances and McCrory’s struggles against Jones.

Boxing has always thrived on contrasts and Curry-McCrory, boxing’s first welterweight unification fight since Leonard-Hearns I four years earlier, had more than its share of them. Those differences extended to their 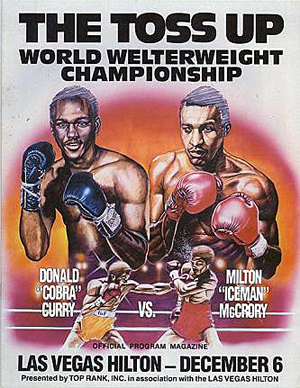 demeanors on fight night; like Leonard had been on that fateful September 1981 evening, Curry was intensely stoic while like Hearns, McCrory was calm, relaxed and a bit playful. Curry’s dark mood was provoked by the considerable taunting McCrory’s camp indulged in, barbs that moved Curry to tell McCrory, who didn’t take part in the teasing, “I’m going to take your string bean heart first, and then I’m going to knock you out.” Then, turning to his hecklers, he said, “And you Kronk fighters back there, you get ready, too, because I’m not finished with you either.”

Curry wiped the smile off McCrory’s face with a jolting right in the fight’s opening seconds, then proceeded to dominate the rest of the session with precise combinations that sliced through the WBC champion’s defense. As Hearns did after Leonard hurt him in the sixth and seventh rounds, McCrory responded to Curry’s power by boxing at long range to start round two, using his 73¾-inch reach to keep Curry at bay.

But with 1:36 remaining in the round, Curry produced a most definitive reply to the question “who is the premier welterweight on the planet.” Curry answered McCrory’s jab by stepping in and delivering a picturesque hook to the jaw that left the Detroit native spread-eagled on the canvas near the ropes. McCrory stumbled when he attempted to rise at five but managed to regain his feet at six. On this night, however, Curry could not be stopped. He ran across the ring and planted a perfect right to the jaw that had “lights out” all over it. Referee Mills Lane stopped the fight at the 1:53 mark of round two and with that, Curry not only became the undisputed welterweight champion, he also became the main threat to end Marvelous Marvin Hagler’s magnificent reign as boxing’s pound-for-pound king.

“With the performance tonight, bring on Hagler,” Curry told World Boxing magazine’s Jeff Ryan in the April 1986 issue. “That’s really how I look at things. The way I felt and performed, I would have fought anybody.”

The Hagler-Curry clash never happened – roadblocks named Lloyd Honeyghan and Sugar Ray Leonard made sure of that – but on this night Curry was at the very top of his game, and of the boxing world.

[Click on the NEXT button at right to read Nos. 9 thorugh 6.]