Breazeale looks like a heavyweight star, but does he have the talent? 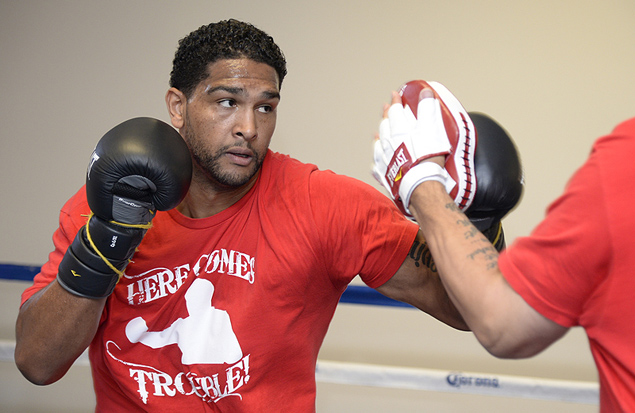 The first thing you notice when setting eyes upon Dominic Breazeale are his physical attributes. At 6-foot-6 and 250 pounds, Breazeale looks the part of the modern heavyweight boxer, cut out of the mold of the Lennox Lewises and Riddick Bowes that changed the scale of the unlimited weight division forever.

At age 27, the Alhambra, Calif. native has worked his record to 5-0 (5 knockouts) after representing the U.S. Olympic team in London as their super heavyweight entrant. Despite bowing out in the first round, Breazeale has shown promise as a professional.

Working on an accelerated time table due to his age, Breazeale will face his first step-up opponent in Lenroy Thomas (16-2, 8 KOs) this Saturday at the StubHub Center in Carson, Calif. on the undercard of Abner Mares’s WBC featherweight title defense against Jhonny Gonzalez, which will be televised on Showtime Championship Boxing.

The bout against Thomas – who will be Breazeale’s first southpaw opponent and eight round assignment – will tell much about what Breazeale’s future in the post-Klitschko heavyweight era that is quickly approaching.

“He’s fighting a real guy,” says John Bray, Breazeale’s trainer. “Now we’re going to see what Dominic has learned in the gym. The guys that we fought before weren’t on Dominic’s level, but this guy is at Dominic’s level. Dominic has been doing a lot of learning in the gym, and that’s where we want to do our learning. Come fight time, he can just go out there and fight.”

Breazeale never imagined that he’d be a heavyweight boxer, never mind one who is pursuing contender status. Breazeale thought he’d be seizing a different mantle, one that was carried by John Elway and Bret Favre. That all changed with a phone call.

About five years ago, a wealthy television executive got fed up with the lackluster performances of American heavyweight boxers and decided to do something about it. Michael King, who had taken a local show in Chicago hosted by Oprah Winfrey and brought it to the masses via international syndication, invested millions of dollars into a program known as the All American Heavyweights.

Based out of Carson, Calif., the program sought to recruit college athletes who fell short of the NFL and NBA drafts to the sport of boxing, with the hope being that the next Ali or Foreman could be found in this pool of athletically-inclined big men.

One of the first men sought out by the program was Breazeale, who at age 23, had just finished up at Northern Colorado University, where he started for two years at quarterback. In 2007, his final year, Breazeale threw for 1,450 yards and eight touchdowns for a 113.4 quarterback rating.

But when the phone didn’t ring for the 2008 NFL draft, Breazeale weighed his options. He had received his degree in criminal justice with an emphasis on psychology, and considered going into work counseling children. That’s when the call from the All American Heavyweights came.

“When the opportunity came knocking to be a boxer, my first answer was no way, I can’t do this. I’m not going to get hit in the face,” admits Breazeale. “Especially being a quarterback, being that guy who shies away from contact. I’m not saying I did that, but on a play by play basis I wasn’t the guy hitting shoulder pads and helmets with other players on the field.

“Once I learned that you didn’t have to get hit in the face in order to box, that’s when my whole concept had changed about boxing.”

Breazeale’s commitment would be tested on his first trip inside the ropes for a sparring session. Standing opposite another former college football transplant, Breazeale ate a clean right cross to the face that caught his attention. The boogeyman of taking a shot to the face was demystified, and he grew to become fond of the sport.

“Most big guys don’t really like to fight, they like to blow guys out. This kid likes to fight,” said Bray, who was one of the trainers working with Breazeale and others at All American Heavyweights. “That’s a good thing, but you don’t always want that though. I want him to use his physical gifts but it’s good to know that this guy is the kind of kid that if he gets his on the chin, he’s not going down, he’s not running. He’s fighting.”

For Breazeale, who hadn’t stepped foot into a boxing gym until he was 23, the tactics and strategies of amateur boxing weren’t all that clear initially.

“I was always trying to get in the ring and knock my opponent out, and little by little I had to learn with patience that in the amateur game it’s all about scoring points,” said Breazeale. “You get one point for jabbing somebody in the face and you get one point for knocking somebody down to the canvas. I went from being an aggressive, big slugging puncher to a quick fast combination puncher overnight.”

Breazeale fought two or three times before moving to the open class, entering into any and all national tournaments he could to gain experience. His amateur career peaked at just the right time when he won the U.S. Nationals in 2012 to make the U.S. Olympic squad, then beat Olympic representatives from the 2004 and 2008 Games in his first international tournament last May at the 2012 Americas Olympic Qualifying Event in Rio de Janeiro, Brazil to qualify for London.

If history is any indication, then Breazeale has an uphill battle if he is going to fulfill his latest goal of becoming heavyweight champion. Transplants from other sports like Michael Grant, Jameel McCline, Lance Whitaker and – more recently – Seth Mitchell, have failed to bolster the argument that athletic talent in other sports can translate to success in the ring.

When Breazeale walks up the steps on Saturday, or any day for that matter, he does so knowing that there is no offensive line to protect him from his opponent’s blitzes, nor is there a backup waiting on the sidelines to replace him in the event of an injury. It is just Breazeale alone as he continues on his unlikely journey in search of a world title shot down the line.

“I love that aspect of boxing,” said Breazeale. “There’s no one to blame, there’s no one to point the finger at. It’s all on you. You put in all of the roadwork, the hard work and the sparring rounds and in the long run, you come out prosperous as the winner.”