Porter-Diaz II to provide warm up to ‘The One’ 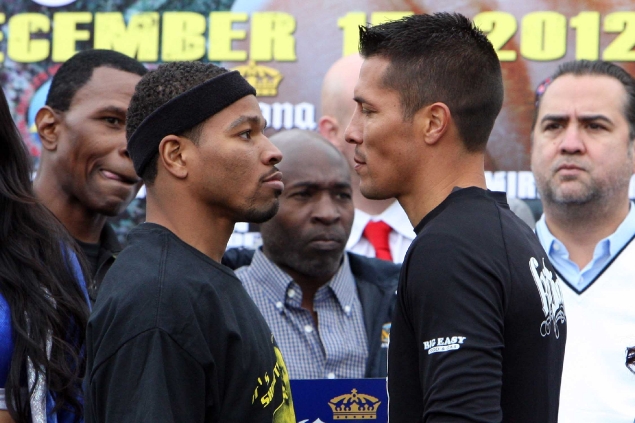 The warmup to ‘The One’ will begin on Thursday, Sept. 12, with a welterweight rematch between Shawn Porter and Julio Diaz.

The undefeated Porter (21-0-1, 14 knockouts) was on a fast track to contendership when he ran into something of a snag in Diaz last December, with their entertaining 10-round fight on the Amir Khan-Carlos Molina undercard ending in a draw. The result got the former IBF lightweight titleholder Diaz (40-8-1, 29 KOs) a shot at Khan (which he lost by unanimous decision in April) while Porter went on to blow out Phil Lo Greco with a lopsided decision on the Lamont Peterson-Lucas Matthysse undercard.

Now the two will try for a more conclusive result two days before boxing gets its biggest night of the year with Floyd Mayweather Jr. vs. Canelo Alvarez on Sept. 14. Porter-Diaz II will take place at the MGM Grand Las Vegas Premier Ballroom and will be broadcast on Fox Sports 2 and Fox Deportes at 10 p.m. ET/7:00 p.m. PT. The event is a co-promotion of Mayweather Promotions and Golden Boy Promotions.

“When I was approached with this rematch, there was no question in my mind about taking it,” Porter said in a Golden Boy press release. “We had a great fight the first time, but this time around I want a knockout. I’m looking to make a statement on Sept. 12, and I will.”

“I think I won the first fight and I’m not the only one who feels that way,” Diaz said. “But I give Porter credit for agreeing to this rematch so we can settle things. He’s a good fighter, but on Sept. 12, I’m going to prove that I’m better.”

The 10-round co-feature will include a 168-pound bout between undefeated Swede Badou Jack and Mexico’s Marco Antonio Periban, whose only loss came by majority decision against Sakio Bika in an attempt to win the vacant WBC title two months ago. Jack was last in the ring for his first 10-rounder, a wide unanimous-decision win over Philadelphia prosepect Farah Ennis.

“Marco Antonio Periban is one of the top super middleweights in the world, and I respect him for his accomplishments,” said Jack. “This is the big fight I’ve wanted though, and I won’t let this opportunity pass me by because when I win, I’ll be one step closer to becoming a world champion.”

“I believe I should be the super middleweight champion right now, but this is boxing,” Periban said. “So to get back to a title fight, I have to make sure I leave no doubts in my fights. Badou Jack is a good fighter with a bright future, but he’s in my way and I have to remove him on Sept. 12.”

Before that will be a 10-round junior middleweight clash featuring undefeated Philadelphian Julian Williams, who last saw action with an eight-round UD over Joachim Alcine, against Hugo Centeno Jr., who is also undefeated with wins against Ayi Bruce and KeAndrae Leatherwood on his resume.

Tickets for the event priced at $100, $75, $50 and $25 (not including applicable service charges and taxes) are on sale now. To charge by phone with a major credit card, call Ticketmaster at (800) 745-3000. Tickets also will be available for purchase at www.mgmgrand.com or www.ticketmaster.com. With the purchase of a ticket, fans will be given a reserved seat to the weigh-in for the “The One: Mayweather vs. Canelo” taking place Friday, Sept. 13, at the MGM Grand Garden Arena. Fans will also receive a 10 percent discount on tickets for closed-circuit viewing of the Mayweather vs. Canelo card on Sept. 14.