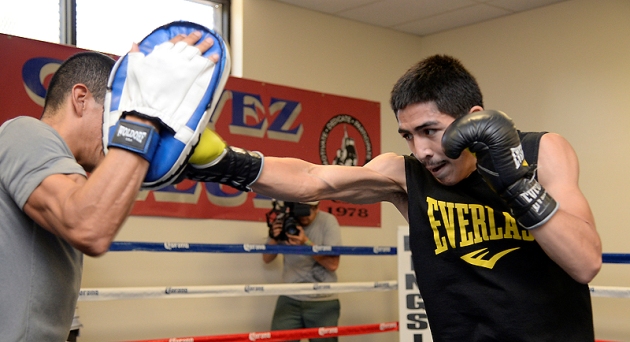 By challenging Victor Terrazas on Saturday for the WBC junior featherweight title at The StubHub Center (formerly The Home Depot Center) in Carson, Calif., Leo Santa Cruz returns to the site of his victory over Vusi Malinga for the IBF’s bantamweight belt last June.

A swift-rising body puncher who turned 25 on Aug. 10, Santa Cruz (24-0, 14 knockouts) defended the 118-pound strap three times — twice by stoppage — before winning his 122-pound debut by fifth-round knockout over Alexander Munoz in his last fight on the Floyd Mayweather Jr.–Robert Guerrero card in May.

Having stopped Munoz for the first time in the loser’s career, Santa Cruz is, nevertheless, taking yet another step up in stature in Terrazas, a 30-year-old winner of 11 straight fights, seven of which were by stoppage.

Terrazas (37-2-1, 21 KOs) was last in the ring for a split-decision over Cristian Mijares in April, earning the title vacated by current WBC featherweight beltholder Abner Mares, who will make a defense against Jhonny Gonzalez in Saturday’s main event.

RingTV.com sought the opinions of 16 boxing insiders as to whom they believe will be triumphant between Santa Cruz and Terrazas.

Terrazas, a ranked contender, figures to be dangerous, especially early. But Santa Cruz’ energy and work rate figure to prevail in what looks be a springboard toward a major bout at junior featherweight.

If the relentless battler from Mexico can continue what he started against former world champion Alexander Munoz last May, he should roll through Terrazas and the majority of the weight class with relative ease.

Look for Santa Cruz to wisely target the body where Terrazas has shown vulnerability in the past. I expect Santa Cruz to again show why he’s one of the most entertaining and marketable fighters in all of boxing with an exciting sixth-round knockout to claim the WBC junior featherweight title.

Leo Santa Cruz TKO 10 Victor Terrazas: Although Leo Santa Cruz is new at the weight, I don’t see that being relevant here. He puts his punches together brilliantly and traverses up and down like a seasoned veteran, despite being only 25 years of age.

Santa Cruz was a champion at bantamweight, and I believe he will claim his second title at junior featherweight by stoppage. Victor Terrazas is defending the crown, but I see him being out-worked for the majority of the contest and surrendering in the championship rounds.

Leo Santa Cruz KO 9 Victo Terrazas: Leo Santa Cruz is knocking on the door of the top-10 pound-for-pound list and an impressive performance here could result in him breaking the door down.

He is one of the few fighters ever to merge extraordinary output with extreme accuracy and though his face marks up from time to time, his defensive numbers are above-average.

Victor Terrazas has a good defense too, but he doesn’t have any outstanding skills to counteract Santa Cruz’s. This one will go rounds only because Terrazas has veteran wiles and Santa Cruz isn’t a fantastic one-punch KO artist, but I only see one winner here. 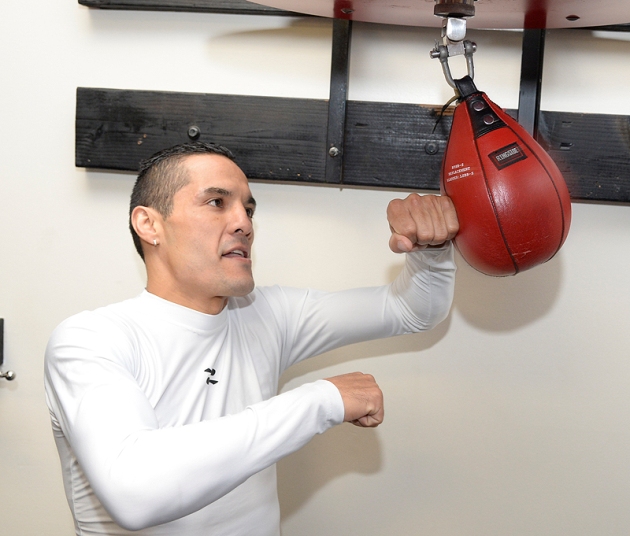 Terrazas has noteworthy points victories over veterans Cristian Mijares and Fernando Montiel in the past two years, and has been stopped just once since his pro debut 10 years ago.

He should give Santa Cruz competitive work, but Santa Cruz will be entirely too busy for the Mexican champion to out-box him over 12 rounds.

Leo Santa Cruz W 12 Victor Terrazas: I am actually looking forward more to this fight than the main event. This could be a terrific scrap. Both are quality fighters, both throw a lot of punches, both can take it.

I think the first half of this fight will be very close and Victor Terrazas might have a lead. However, I think youth will play a part in this one, and that Leo Santa Cruz roars down the stretch to take over and wins a decision.

Though this opponent might not be first class, Santa Cruz will not take him lightly. He hasn’t gotten soft this quickly. Pressure, pressure, pressure will do it again against Victor Terrazas.

His activity will keep Terrazas on his back foot. The bout should be a crowd pleaser as both fighters tend to be more offensive-minded. Terrazas is on an 11-fight winning streak, but has never faced an opponent with the talent of Santa Cruz. I see Santa Cruz pulling away in the later rounds to win by a comfortable margin.

Both guys are going to land plenty, but the youth and offensive volume of Santa Cruz should eventually wear Terrazas down.

Victor Terrazas will test Santa Cruz with his experience and power, but when you’re young and fresh like Santa Cruz is, you can survive

Victor Terrazas is a pretty good fighter, but Golden Boy is planning another Santa Cruz showcase. After all, in his only fight in the U.S., Terrazas barely beat a 23-10 fighter by split-decision.

Terrazas has been knocked out in his two losses. Expect that to happen a third time on Saturday night. Santa Cruz is elite and a showdown with Mares is looming somewhere down the line.

Leo Santa Cruz KO 8 Victor Terrazas: Full credit to Victor Terrazas who managed to eek out a very close fight with Cristian Mijares to win the vacant WBC 122 title Abner Mares had vacated back in April.

Terrazas is a tough, seasoned campaigner, but in Leo Santa Cruz he’s meeting one of the rising stars of the game. Santa Cruz is a punching machine.

I believe he will get to Terrazas in around eight rounds with his activity and volume punching being to much for a spirited Terrazas.