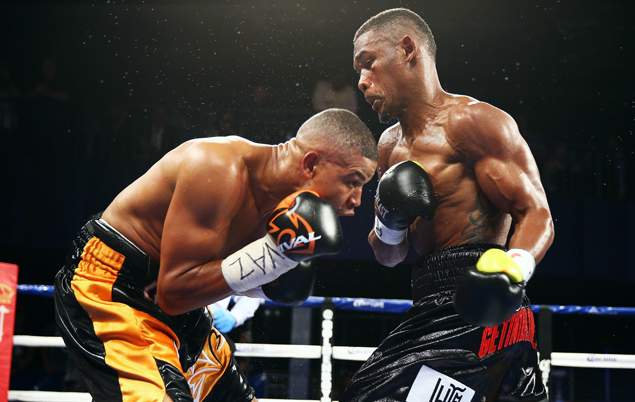 Emanating from the Best Buy Theatre in New York, the bout was a solid crossroads bout between two New York-based fighters looking to make a statement on this inaugural broadcast.

The fight began slowly with Jacobs (26-1, 23 knockouts) edging the first two rounds. It seemed Lorenzo was breaking through with some rough tactics in the third before Jacobs dropped him on his face when the two were exchanging. 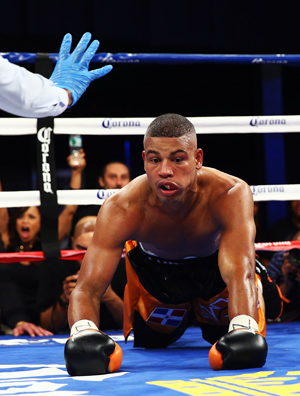 Lorenzo (32-6, 24 KOs) tried steadying himself but was ruled knocked out. A left-right combination, enhanced by slow-mo replays later on, landed devastatingly. The end was called at 2:05 of the round.

It marked the first time the Dominican Republic-born Lorenzo had been stopped in his career and will further establish him as a gatekeeper-type fighter moving forward.

Jacobs has been moved at a good pace since the almost two-year layoff that ended last year. Hopefully, Golden Boy doesn’t cash the cancer surviving 26-year-old Brooklynite out against WBO beltholder and former Brooklyn resident Peter Quillin, which could be built into a big fight in New York.

At just 20 years old, junior middleweight prospect Eddie Gomez of the Bronx scored the most significant victory of his career when he stopped the experienced Steve Upsher in the fourth round.

Gomez (15-0, 10 KOs) nearly finished things in the first round when he backed up and rocked the Philadelphian and landed an assortment of flush power punches.

Chambers (24-3-1, 6 KOs) stayed on his fight but was rarely throwing back. Luckily, referee Steve Smoger was in charge and he doesn’t stop a fight unless eyes are rolling. That saved Upsher from picking up the harsh KO1 loss. 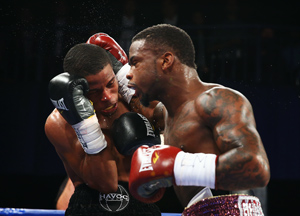 Upsher just didn’t have the power to keep Gomez from taking advantage of him. After the first, Upsher got his legs back and even landed the occasional punch on the wide open Gomez when he would come in. Gomez never flinched, and though he took his time, earned the stoppage at 2:33 of the fourth round. Upsher had previously put up a good rally but was caught with some big shots and Smoger didn’t like what he saw, stopping it to the protest of Upsher. But what Philadelphia fighter has ever not protested a stoppage?

U.S. Olympian Terrell Gausha (5-0, 3 KOs), of Cleveland, kicked off the festivities by dominating a game but outclassed Austin Marcum (5-4, 3 KOs), ultimately stopping the West Virginia journeyman early in the second round.

The 25-year-old Gausha was a little wide and was even clipped prior to the fight finishing barrage. Against this level of opposition, that approach won’t manifest itself as a disadvantage. Ultimately it wound up producing an entertaining and brief fight, which was the best way to begin Golden Boy’s new series. Marcum was turned stiff while standing at the bell to end the first round. The end would come a minute later when a heavy barrage ended it at 1:04.

Junior middleweight New Yorkers Gary Beriguette (2-0, KO) and Kamal Muhammad of (0-2) engaged in a sloppy and, at times entertaining four-rounder. Beriguette earned the nod despite being on the canvas in the opening round. Muhammad was the one on the floor in the second round between these two novice pros. Beriguette was the slightly more polished, earning the nod by scores of 39-36 and 38-36.