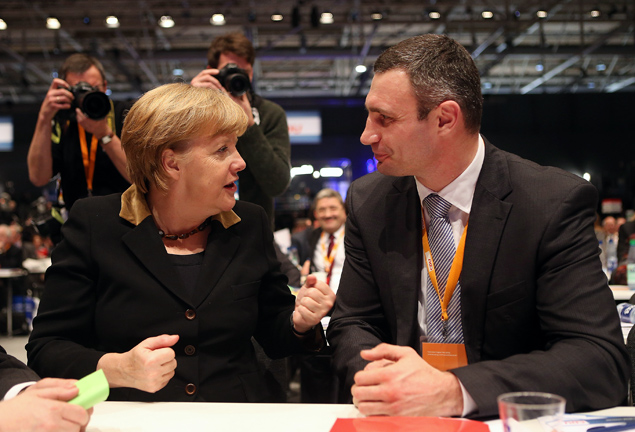 Vitali Klitschko is being given until March to make a mandatory defense of his WBC heavyweight title against Bermane Stiverne as a result of his involvement in Ukrainian politics and a hand injury, WBC President Jose Sulaiman informed RingTV.com on Friday.

Klitschko (45-2, 41 knockouts), who turned 42 in July, has not been in the ring since September, when he made the 10th defense of his belt with a fourth-round stoppage of previously unbeaten Manuel Charr.

“There were rumors that he was retiring, but he has said, ‘No’ to that,” Sulaiman said of Klitschko, whose 13-fight winning streak includes 10 knockouts.

“But he has been busy and involved in politics, and then, he had a problem with his right hand. He has seen a doctor, and the doctor said that he will not be ready to fight until sometime in the month of March.”

Klitschko has not suffered defeat since falling by sixth-round knockout to Lennox Lewis in June of 2003.

“Vitali Klitschko deserves the support of the WBC, because he has been a very loyal and a good example in his private life. We respect his position and we support him,” said Sulaiman.

“Vitali Klitschko will keep his title and Stiverne will be his first defense. If Stiverne wants to wait, that will be okay, but that’s a long time for him to remain without fighting.”

The decision is frustrating to Stiverne (21-1, 20 KOs), whose unanimous decision over Chris Arreola in April was designated as a WBC elimination bout for the right to face Klitschko.

Prior to his first-round knockout of Sergei Liakhovich on Aug. 9, Deontay Wilder’s promoter, Golden Boy CEO, Richard Schaefer, said that he would like to match Wilder against the winner of a Sept. 7 clash between Seth Mitchell and Chris Arreola.

Asked whom he thought would emerge victorious among his three counterparts, Stiverne chose Arreola.

“Personally, I would have to go with Arreola to beat Mitchell. I think that Arreola has too much experience for him,” said Stiverne. “I think Arreola’s going to stop him. I don’t see it going more than 10 rounds.”

What happens with Wilder and Arreola?

“I would still go with Arreola. Arreola has a big punch. Wilder’s got good skills and he’s tall. Being tall doesn’t mean much, especially in the heavyweight division, unless you’re the Klitschkos,” said Stiverne.

“But the Klitschkos, they’ve got experience. Deontay Wilder, so far, he’s got 29 knockouts, but I don’t think that he’s faced anybody who can take his punch and then punch him back. When that happens, that’s when we’ll see what he’s made of.”

Also, WBO light heavyweight titleholder Nathan Cleverly (26-0, 12 KOs) weighed 174 pounds compared to 173 for Sergey Kovalev (21-0-1, 19 KOs) in advance of Saturday’s bout, which will be televised as part of a triple-header telecast from the Motorpoint Arena in Cardiff, Wales.

EDWIN RODRIGUEZ: ‘MY CAREER AND MY LIFE ARE IN A GOOD PLACE RIGHT NOW’

The past six months have been an emotional whirlwind for super middleweight Edwin Rodriguez (24-0, 16 KOs), a married father of three from Worcester, Mass.

In March, Rodriguez scored a unanimous decision over previously unbeaten Ezequiel Osvaldo Maderna. Last month, he blasted out Denis Grachev at 2:50 of the first round in a triumph he called “the biggest, most important of my career.”

The wins over Maderna and Grachev, in Moncaco, meant that Rodriguez had emerged victorious from the four-man, Monte Carlo Million Dollar Super Four.

In between, however, Rodriguez experienced his 28th birthday in May, managerial problems, the birth of his third child, Evan Kaden Rodriguez on April 15, and, unfortunately, on the same day, the Boston bombing near the hospital where his wife, Stephanie, gave birth.

Later, Rodriguez realized that Tamerlan Tsarnaev, had been an amateur boxer with whom he once sparred.

“Having sparred with a person that was so evil and who would have such bad intentions, that’s one thing that was among the issues that I had to work through, mentally, in my last training camp,” said Rodriguez on Wednesday.

“Being able to come out on top and get a great win against Grachev, that was a big thing for me. So after that, it was time for a vacation. So I went for a week from Tuesday to Tuesday to Disney World in Florida. I left the phone in the car for a week, just spending time with the family.”

Rodriguez has since signed with powerful advisor, Al Haymon, and, with the help of promoter, Lou DiBella, is in search of a title shot, perhaps against WBC beltholder Sakio Bika. But that may have to wait sine Bika could be matched against Anthony Dirrell on the undercard of IBF light heavyweight titleholder Bernard Hopkins’ defense against Karo Murat.

“I’m excited about this chapter in my life and my career. Al Haymon is one of those men who is known for making good fighters into stars, and I’m ready for that. I’m ready for that next step up. My dream fight would be to fight for a world title. That’s something that Al Haymon could make happen,” said Rodriguez.

“Sakio Bika’s a fighter that is managed by Al Haymon, and that’s the one who is on my radar right now. I’m hoping to get a shot at him really soon. Like I said, my career and my life are in a good place right now. I’m looking forward to the next chapter of my career that starts with Al Haymon, and to continuing to work with Lou DiBella, who has done a great job moving me along. I’m excited about the future, and I’m not looking back.”

Once-beaten junior middleweight Boyd Melson (12-1-1, 4 KOs) overcame a deep cut over one of his eyes in the eighth and final round of Wednesday’s unanimous decision victory over Jason Thompson (5-7-3, 4 KOs) at The BB King Blues Club in New York City.

In October of last year, Melson and Thompson had swapped knockdowns during a tightly-contested six-round draw at Barclays Center in Brooklyn on the undercard of a whose main event during which RING, WBA and WBC junior welterweight champion Danny Garcia knocked out Erik Morales in the fourth round.