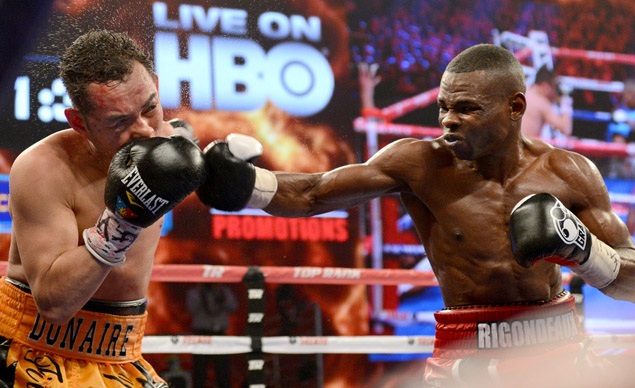 Rigondeaux (12-0, 8 knockouts) earned the RING, WBA and WBO titles with on April on HBO with a unanimous decision over Nonito Donaire, but has since had difficulty finding an opponent.

Romero is 23-0 with 12 knockouts heading into the bout with Martinez (28-4, 20 KOs), which is part of a triple-header whose main event matches Australian IBF middleweight titleholder Daniel Geale and England’s Darren Barker on HBO’s Boxing After Dark.

“We’re looking for people in the 122-pound weight class who can continue to provide entertainment along with the two big stars that we’re already covering in that division, Nonito Donaire and potentially Guillermo Rigondeaux. If we can find a way to match Rigondeaux interestingly, one of the questions that we have in the division is who has the goods to fight Rigondeaux,” said Lampley.

“So I’m interested to see Martinez, who is the underdog in the fight, and who is going to be the puncher. I think that in order to make Rigondeaux interesting in the division and in the ring as skilled as he is and as dominant as he is, we need punchers to go at him. We need somebody who can go straight forward and challenge Rigondeaux, stylistically.”

Lampley also sees Romero as a challenge to Rigondeaux.

“Romero is taller, longer and probably the better boxer, and the favorite against Martinez,” said Lampley. “It may be a situation where, if he is as good a forward-moving aggressor, as I am told that he is, and he has that kind of length, and the the confidence of an unbeaten fighter, then maybe he’s the guy who could provide a challenge to Rigondeaux.”

Donaire has also been mentioned for a potential Nov. 9 card that could include a junior lightweight bout between RING featherweight champion Mikey Garcia and WBO beltholder Roman “Rocky” Martinez, and may return as a featherweight.

“The one that probably isn’t going to move up is Rigondeaux,” said Lampley. “Because his advantages at 122 are probably too big for him to move up.”

“Geale-Barker is part of the ongoing (question) of the middleweight division, which is who is going succeed Sergio Martinez, and how do they get to that level. It’s a truly great division with seven or eight or nine top fighters all angling for position. Martinez is a great fighter and a future Hall of Famer whose body is clearly breaking down and he seems to be headed for the end of his reign. Among them, the guy who is suddenly the most feared fighter in boxing, and that’s Gennady Golovkin,” said Lampley.

“Here are two guys who are in the top five or six in that division who are very, very competent boxers with some power. Maybe Barker has a little bit more punching power than Geale. Maybe Barker has an edge in the most important kind of experience, because he fought Martinez in Atlantic City. On the other hand, Geale is the guy who went to Germany and beat [Sebastian] Sylvester when Sylvester held the title, and went to Germany and took [Felix] Sturm’s title. Convention in the sport is that it’s very tough to beat a German fighter when he has the title on his home turf.”