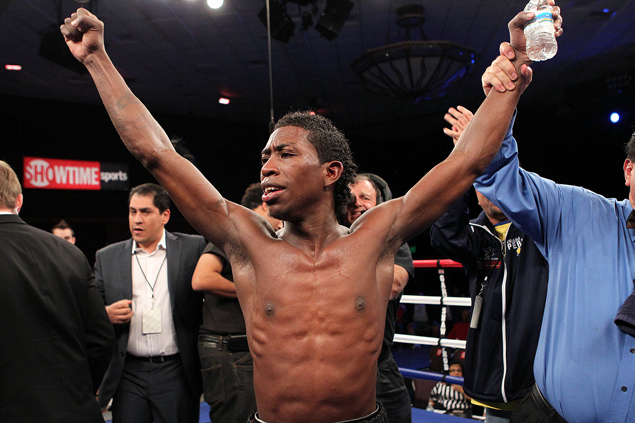 When you’ve come from where Jhonatan Romero grew up, boxing is the easy part of life. The 26-year-old Colombian is from a family of eight brothers of which four tragically lost their lives due to violence. Boxing has been a way for Romero to escape the horrors of poverty and urban violence of his childhood and achieve something many in his position could only dream of.

Unlike many of his countrymen who are often swing-for-the-fences fighters equally likely to score the KO or be on the receiving end of one, “Momo” comes from a strong amateur pedigree engaging in excess of 200 bouts that saw him get to the quarter finals of the 2007 world championships before appearing at the Olympics the following year, though he disappointingly lost in the opening round of the 2008 Games.

Romero then made the move into the pros, initially fighting at home, getting a solid grounding before heading to America for the first time in mid-2011. Since then his activity slowed as he stepped up the quality of opposition, but the wins kept coming. When Nonito Donaire abdicated his IBF 122-pound title, Romero was in position to fight for the vacant belt having won an elimination bout against Efrain Esquivias.

In February, Romero headed to Tijuana, Mexico to take on local boxer Alejandro Lopez, and after 12 heated rounds, Romero was announced the victor via deserved split decision. In doing so he became the first fighter from the 2008 Olympics to win a world title. He also became the 17th world titleholder to have fought under revered promoter/manager Billy Chams, a stalwart of Colombian boxing. Sadly, six weeks after Romero’s title triumph Chams passed away.

This Saturday, Romero (23-0, 12 knockouts) will be looking to make the first successful defense of his belt when he takes on hard-charging Kiko Martinez. Romero, who spoke through his translator Sergio Chams, says “this will be the most important fight of my life,” adding “Kiko is a good and strong fighter, but he is not going to stop me.”

Anson Wainwright: You will be making the first defense of your title against Kiko Martinez on Aug. 17 in Atlantic City. What are your thoughts on that and what do you think of him? 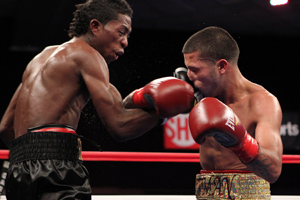 Jhonatan Romero: This will be the most important fight of my life. Getting the opportunity for a world title and winning it was very hard. We’ve come a long way so I will do my best to retain it for a long time. Kiko is a good and strong fighter, but he is not going to stop me.

AW: It will be the undercard of Daniel Geale-Darren Barker and will be shown on HBO in America. Can you tell us what this means to you?

JR: HBO is the most important TV network for boxing nowadays, and I will show the world that “Momo” Romero is a great champion. I thank God for this opportunity.

AW: Where have you set up camp for this fight? Could you tell us about a typical day in training?

JR: I began training in Colombia, now I’m in L.A. until the week of the fight. I run early in the morning or late afternoon, depending on the training. Here in L.A I have better sparring to accommodate us in this fight.

AW: In your last contest you won a split decision over Alejandro Lopez in his hometown of Tijuana, Mexico to win the IBF 122 title. Can you tell us a little about the fight?

JR: Alejandro Lopez is a great fighter. His style is similar to mine, and I was away in his hometown, with the crowd against me, so I had to push harder and show the judges that I was the best fighter in the ring. Thanks to God they saw it right, and proclaimed me world champion.

AW: What did it mean to you when you were announced as the winner?

JR: I was very excited before they called it. My corner was very confident that we had won the fight. I thank God over all – my trainers, my family, my friends, my managers, and all the people that support me.

AW: Well known promoter Billy Chams has had many world champions, you were the last one before sadly he passed away. This must have meant a lot to you to be able to win that title for him.

JR: Yes, Billy was a great person. He gave me the chance of being with his company. He was like a father to us. We trusted him and let him guide us in our careers and personal life. Being champion is the biggest success of my career, and being Billy’s last champions is a great honor to me. His nephew Sergio Chams has taken his place, and now I have to keep working hard, to retain my title and make Billy proud of me in heaven.

AW: If we can talk a little about your life. You were born and live in Cali. Can you tell us what it was like for you growing up there?

JR: I grew up in a very small and dangerous neighborhood of Cali. I had a bad childhood, from a family of eight brothers. I have lost four of them because of the violence but thanks be to God, I have gone ahead, thanks to this sport and many people who have supported me since I started in boxing. 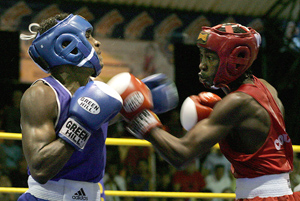 AW: You were a highly decorated amateur, competing in the 2007 world championships and 2008 Olympics, though you didn’t win a medal. Can you tell us about those experiences? Also, what was your final record?

JR: The experience of the world championships in Chicago, I was injured and was among the top eight in the world, which was very good. In the Olympics, I didn’t win because of stage fright. I didn’t have the confidence that a fighter should have when getting into the ring and being in front of the crowd. My record was 236 fights, 210 wins.

AW: When you look at the 122-pound division, what are your thoughts?

JR: First I am focused on Kiko Martinez. But I feel I can be at the top of my division, and when the time is right I would like to fight (Nonito) Donaire, (Guillermo) Rigondeaux and all the best fighters.

AW: Away from boxing what do you enjoy doing with your spare time?

JR: I like spending time with my friends, playing soccer (football).

AW: Who’s your boxing hero and why?

JR: Floyd Mayweather, because of his class.

AW: Lastly do you have a message for Martinez and the junior featherweight division?

JR: I am here to stay and keep my title for a long time, fighting the best.

Photos / Tom Casino-SHOWTIME, Rodrigo Arangua-AFP
Questions and/or comments can be sent to Anson at [email protected]and you can follow him at www.twitter.com/AnsonWainwright