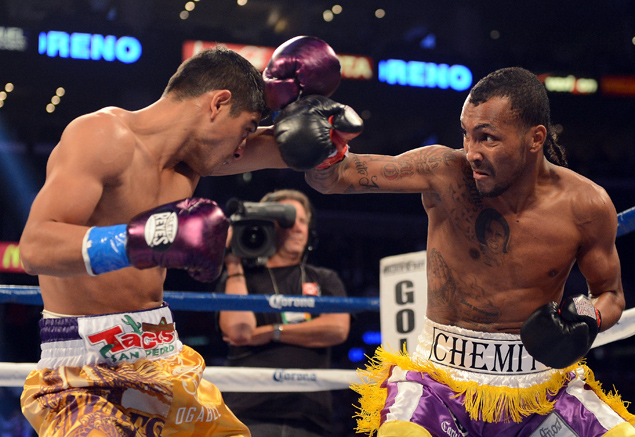 Anselmo Moreno (right) lost a unanimous decision to Abner Mares in a WBC junior featherweight bout last November in Los Angeles. Moreno dropped back down to bantamweight and will defend his WBA title on Saturday.

When Anselmo Moreno moved up to junior featherweight last November for a shot at then-WBC beltholder Abner Mares, it turned out to be a bad day at the office for the skilled Panamanian southpaw. Mares was brilliant; Moreno less so in losing a wide decision.

Since that setback the ramifications have been great for “Chemito,” who has been released of his four-fight promotional pact with Golden Boy Promotions (of which he fought three times). So from fighting on Showtime, making six figures, he’s in a manner of speaking been relegated back to the outside, fighting for considerably smaller purses. However, he isn’t bitter about what happened.

“My experience with Golden Boy was very good,” Moreno, who defends his WBA bantamweight title in his native Panama on Saturday, told RingTV.com through translator Carlos Gonzalez. “I learned a lot and I got to fight in the U.S. for the first time in my career. They where the first promoters outside Panama who believed in me and I am grateful to them.”

The 28-year-old veteran is used to not having things easy. Originally from the notorious San Miguelito district, which was voted the third most dangerous place in Latin America, it’s not like there are many things that can bother Moreno – including the rough reputation of his hometown.

“Everybody likes me and respects me in San Miguelito,” he said, “every time I go they treat me like a king.”

Moreno (33-2-1, 12 knockouts), who is THE RING’s NO. 1-rated bantamweight, has previously bested a plethora of top-draw opponents including Wladimir Sidorenko (twice), Mahyar Monshipour and Vic Darchinyan during his long title reign.

He’s eager to please the boxing public saying of his future aspirations, “I really want to fight whoever the people want to see me against. I am ready, willing and able to go head to head with anyone the TV (executives) want to see me fight from the bantams to the super bantams.”

After a ninth-month layoff the tricky lefty, once dubbed the new Pernell Whitaker, is ready to return to the more familiar confines of 118 pounds and add to his 11 successful defences of the WBA title he won in 2008. The first step on that road sees him meet Colombian puncher William Urina on this Satruday.

Anson Wainwright: You return to action on Aug. 10 against William Urina. What are your thoughts on that fight and Urina?

Anselmo Moreno: What I know is that he is a though opponent. He is a hard hitter with 20 KOs in 24 fights, and he has previously fought outside his country for a world title, so he is very experienced.

AW: It’s been several months since we last saw you fight. Recently it was revealed you have parted with Golden Boy Promotions. Could you tell us about the change in promoters?

AM: My experience with Golden Boy was very good. I learned a lot and I got to fight in the U.S. for the first time in my career. They were the first promoters outside Panama who believed in me, and I am grateful to them. Now I’m working with Sampson Boxing who is always looking out for my best interests.

AW: Your last fight was when you lost to Abner Mares. Having had time to reflect, what are your thoughts on that fight now?

AM: Abner Mares is a great champion, and he got to win that fight. That night was his and he deserved it.

AW: I would imagine that though you lost you were upset at how the scorecards the judges handed in were so lopsided.

AM: I’m just a simple boxer and not a judge. I always have respect for the judges’ decisions. There is nothing I can do about it, so why worry about it?

AW: What is a typical days training for you?

AM: Well I can tell you that I really focus for all my fights, and train very hard. I run 11 kilometers every morning at 4:00 am and again at 4:00 pm every day, and at 10:00am I’m at the gym with Celso my trainer who has been with me since I was a little child and knows all my pros and cons. He is the one that designs my training sessions. My walk around weight between fights is usually around 130 pounds.

AW: You were born and raised in San Miguelito, Panama. It’s known as a very dangerous place. Could you tell us about your early years growing up there?

AM: Coming from a very humble family, I have to be always grateful with my grandma who was the one that made me who I am today. She kept me away from all the temptations and made me focus on my education and on my hobbies (soccer and boxing).

AW: How are you received when you go to San Miguelito now? Are you like a hero returning home or do you still have to be careful?

AM: Naaah, everybody likes me and respects me in San Miguelito. Every time I go they treat me like a king. They all know how hard I trained and the sacrifices I had to go through to be where I am right now.

AW: What are your goals in boxing? 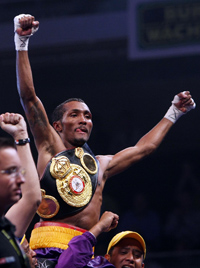 AM: I would love to fight again in the U.S. Europe and Asia are also an alternative, and of course fighting in my home country is always great, but what I really want is to fight whoever the people want to see me against. I am ready, willing and able to go head to head with anyone the TV (executives) want to see me fight, from the bantams to the super bantams. On Aug. 10 I will have my 12th defence of my ‘super’ WBA bantamweight title, but if I have to move up in weight for the best fight possible, I will move.

AW: What are your thoughts on the bantamweight division? What do you think of the other current world champions at 118 pounds: Shinsuke Yamanaka (WBC), Jamie McDonnell (IBF) and Tomoki Kameda (WBO)?

AM: I respect them all because they are champions, but I don’t really know them.

AW: Tell us about your life away from boxing?

AM: (Laughs) well, it has become a tradition to make myself a new tattoo every time I win a fight. Most are decorations, but there are two really meaningful ones, the one of my wife and the name of my grandma. Not many people know me well, but I am a very family oriented person. I love to spend quality time with my family, especially with my sons and my wife. I feel blessed with their company.

AW: In closing do you have a message for the bantamweight division?

AM: They better train hard. That’s it.

Photos / Harry How-Golden Boy, Alain Jocard-AFP, Patrik Stollarz-Bongarts
Questions and/or comments can be sent to Anson at [email protected]and you can follow him at www.twitter.com/AnsonWainwright